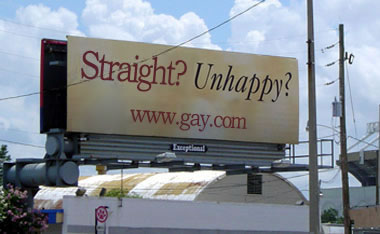 I saw this post on Boing Boing involving a blogger and free speech. Justin had posted the above image in response to this image:

which is/was a campaign by Exodus International, a group that disagrees with homosexuality and tries to “cure” it through the “love of Jesus Christ” amongst other methods.

Justin got a cease and desist letter from Exodus, got legal representation and contacted the ACLU. Here’s the ACLU response.

This story got picked up by USA Today. Result thus far: Exodus has backed off.

blurbomat 2¢: blurbomat believes that most gay people are born gay. Some might not be and make a choice to be gay, but we believe those individuals to be in the minority in the gay community. We also believe that any Christian group trying to un-gay somebody is hypocritical. We don’t believe that being homosexual is a sin. We think the cross to bear is not for those who are gay, but those who believe in crosses in the first place.

« SXSW: The Bloody Recap
Can we say it together? Hubris »

Gotta Love Jesus. And the South.