An Orgasm of Shit

I was originally going to title this entry, “Showing the Better Half Too Much of My Ass Crack,” but I realized I’ve spent the majority of the last two weeks revealing far too much crack to my better half and she doesn’t need to read that kind of garbage from me on the internet. She’s seen it as I’ve been bending over to lift, paint, nudge and piledrive.

All of this comes because we are besieged by the Gantt chart/Visio wireframe involving the arrival of a newborn. That and our desire to complete the nursery before the child actually arrives. If I were left to my own devices, the nursery would consist of an iPod (40 gb) and a G5 (dual 2 Ghz) box. The baby would fit right into the G5 box and be ready to code PHP within three months after listening to subliminal coding lessons ripped and played back on the iPod.

So the nursery must be done and without cardboard boxes. We are faced with a bit of a situation. In order to make the nursery happen, two-thirds of our house must be upended and rearranged as if it were one of those sliding tile puzzles where there is one tile missing and you have to move everything just so to complete the picture that the tiles make if completed correctly. Imagine completing the picture, but being one column off. This is what we are faced with.

Everybody’s got a basement somewhere, and it’s full of shit. In order to actually finish the nursery, all the basment shit has to be unpacked (yes, I know we moved in six months ago and yes I know my wife is six months pregnant) and rearranged so that the garage shit, of which a subset contains the aforementioned nursery, can be moved in to the room formely known as the guest room and the better half’s former office can claim the title of guest bedroom. Add to that years of moving without properly purging and times that by two. Add to that the sudden realization that of the 7000 lbs which you paid to have moved, you will have lifted 75% in the past 18 hours. Your stubborn, southern and pregnant wife will have lifted most of it, dusted it, and arranged it with the precision the Teutons would have admired. I’m not lying when I say that as I was untangling and coiling a few spare ethernet cables, my amazing wife had completely organized a full third of the worst room in the basement.

Meanwhile, the garage has become a staging area for the nursery. It’s set to pop because it’s also the staging area for the garage sale we’re going to have. Next Spring. The garage itself is a micro version of the tile puzzle and so every time a box or bag is added, the puzzle is reset and must be re-solved. I’ve moved everything in the garage at least four times since we’ve moved in, and before the nursery is done, I’m sure it will have all been moved four more times.

Did I mention, prior to welcoming the baby, we are going to completely demolish and rebuild our kitchen? 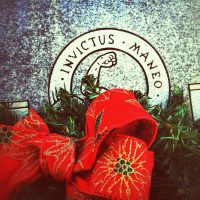