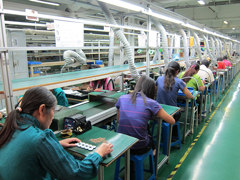 Apple, America and How America is Losing

I like Apple products. The reasons have less to do with being trendy than how the devices fit into my life. Yes, I have gone overboard as my business success allowed me to purchase the latest and greatest of their products. However, most of those machines have been grandfathered as new ones were purchased. Many have been given to family members. The oldest one still in use is a 6 year-old MacBook Pro that had been dropped while being carried in a backpack without any padding.

The products Apple makes are beautiful and durable, glass iPhones notwithstanding. My desktop is approaching four years in age and since I installed a solid state drive, I believe I extended its usable life by at least 18-24 months. The laptop I’m writing this on is just over a year old and still works as good as the day I first started using it. It’s a pleasure to use. I’ve edited countless images on it. I have always wondered how these products are made; I assumed it was mostly by robots. I was very, very wrong.

A week or so ago, This American Life aired a monologue from Mike Daisey that shed some light on how the products I use everyday and enjoy so much are made. It’s worth listening to in its entirety:

Mr. Daisey and the Apple Factory | This American Life.

Mike Daisey was a self-described “worshipper in the cult of Mac.” Then he saw some photos from a new iPhone, taken by workers at the factory where it was made. Mike wondered: Who makes all my crap? He traveled to China to find out.

This isn’t just about Apple, but about all the gadgetry that we use. Apple hasn’t officially responded to Mr. Daisey’s assertions, but they have posted this page, which is linked from a prominently placed graphic on apple.com’s homepage:

“Apple is committed to the highest standards of social responsibility across our worldwide supply chain. We insist that all of our suppliers provide safe working conditions, treat workers with dignity and respect, and use environmentally responsible manufacturing processes. Our actions — from thorough site audits to industry-leading training programs — demonstrate this commitment.”

The New York Times published a story that explores the national and international implications of how our very profitable gadgetry is made. This story should be required reading for the entire United States:

“It isn’t just that workers are cheaper abroad. Rather, Apple’s executives believe the vast scale of overseas factories as well as the flexibility, diligence and industrial skills of foreign workers have so outpaced their American counterparts that ‘Made in the U.S.A.’ is no longer a viable option for most Apple products.”

There is no place on earth at this moment with the culture, supplier proximity and a seemingly endless supply of workers willing to work like hell, sleep in cramped dormitory quarters and expose themselves to harmful chemicals for what we consider to be a pittance except China. The kicker for me from the NYTimes piece is that it wouldn’t cost Apple that much more per iPhone to make it in the United States. Cost isn’t the problem. The problem is one of infrastructure. We don’t have enough people with the right knowledge and/or skill sets necessary to compete. We don’t have the supplier chain scale or companies who can make things like screws or other machined parts and make them quickly. Systemic failure to adapt. This failure starts with education and reaches deep into the pysche of this nation starving for jobs and wanting to build things at home. It’s hard to look in the cultural mirror sometimes, but these stories are fantastic examples telling us we must look. And we know before we do, what we see will be difficult to grasp at its most full.