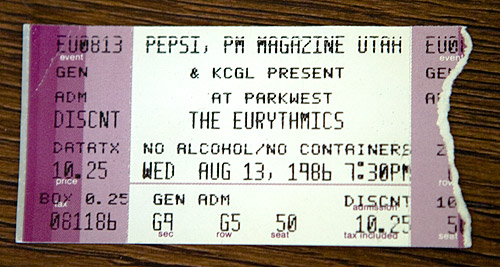 There are reasons that moving takes me so damn long. Every move, I try to thin my crap. At least for the past 6 years. But with every move, there are boxes that just get moved and stacked and ignored until the next move. Until now. During the garage re-org, I found a box that I’ve lugged around for a damn long time. I probably got it from my mom’s house sometime in the mid-90s and it’s been in my basement, in storage, in my basement at our old house and finally, in the garage. This box contained crap and another box which contained letters that were sent to me when I was in England. Over twenty years ago. Both boxes needed to be sorted and junked. As I was cleaning, I discovered this ticket stub:

I do not save ticket stubs. Once I caught the date, it stopped me in my tracks for about 10 minutes. I went right back to that summer. This show was a few months after I got back from England, just ten days before my dad died and I felt a little guilty going to a show with my sick dad at home, but kind of needed the escape. I remember fighting the crowd for half the show. Shows at ParkWest (now The Canyons–I don’t think they do shows any more) were general admission. Most people sat up on the hillside on blankets, but the True Fans stood right against the stage. At this show, there were opposing drunken people on either side, pushing the 75 abreast crowd back and forth (kind of a dumbass attempt at a mosh pit… at a EURYTHMICS show… par for Utah shows in the 80s… e.g., moshing to fucking reggae because of stupidity, pent-up sexual frustration and desperation) plus the usual crush of fans against the front of the very flimsy security barricade worsened due to the size of the crowd and the slope of the natural, dirt amphitheater. I was right in the middle of it, hoping for a better view and a richer musical experience. Didn’t really happen because I didn’t want to crush those around me.

I finally fought my way out and found the group of people I had driven up to the show with and they were a little shaken by how I looked, reaching out to me like I had just survived a battle. It was a downer of a show. Annie Lennox stopped three times, threatened to stop the show if “we don’t get some cool people up front”. It made me like her and the band even more, despite stopping during my favorite songs.

I remember driving home from that show being crushed by the risk I had taken of leaving my father literally in his deathbed and the payoff being not worth the risk. I was being over-dramatic. My mom was there should anything have happened, but I didn’t want to be away from the house when my father passed. And I knew it was getting closer every day that summer. Getting back home from Park City took a couple of hours, putting me home at 2 a.m. While I needed to get out and breathe, it just wasn’t good. The next morning my mom asked me how the show was and I faked a positive response, just to try to bring some good energy into the house. It mostly worked, but I carried the guilt around for a year or two following my dad’s passing.

All of this from a long-forgotten ticket stub in a twenty-year-old box.

« I Miss These Trees
Guess who spilled this? »

Slashdotted… BY MY WIFE