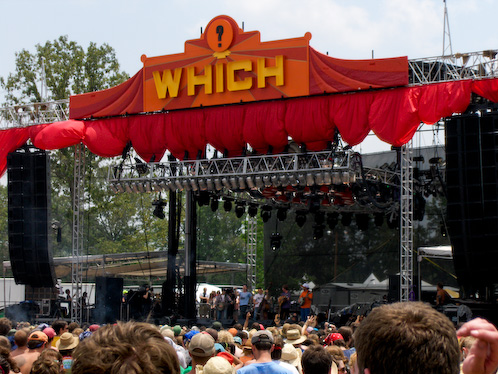 This was our biggest, longest day. Since we weren’t camping there we had to factor a commute of about 25 minutes or so each way. I thought I would have time each day to recap and post a few photos from the day. I was mistaken. I also thought I’d have time to walk around and take photos, one of my favorite things to do when traveling. I was mistaken.

When we checked into the hotel, we were given a smoking room that had been previously inhabited by 30 ton bales of burning tobacco leaves. We kept at the front desk, asking repeatedly for a third bed so that the three of us could have our own space. The beds were full-sized, so co-sleeping was not an option. After the third shift change, the front desk guy scored a rollaway bed and gave us a new, smoke-free room. We were moved Friday morning right as we were getting ready to depart. Upon returning, we discovered the WiFi wasn’t so hot in the new room, making any updates an effort in futility. Apologies, gentle readers for the inconvenience.

Today was the most crowded and insane day of Bonnaroo. People everywhere, worse than Disneyland and four times as hot. Extra dust was trucked in at great expense. I bought a bandanna Friday night after I saw McQueen put his to good use as a cooling mechanism and other people using them as dust masks. It was one of the cheapest and best pieces of gear ever. Except the inflatable chair that also functioned as a nap mat.

Old Crow Medicine Show–We got a nice open spot fairly close to the stage. We stayed for the whole set and it was a nice intro for the day. I wasn’t that familiar with them, but OCMS fit the vibe pretty well, and based on the ratio of Mid-South/Deep Southern accents to the Y’all Ain’t From Round Here accents, having some country flavor was like a nice slab of ribs cooked in the pit.

Ziggy Marley–Kind of accidentally heard a bunch of his set because we bought lunch ($4 pizza slice! Cheap for a festival!) and found a shade tent that had a steady mist flowing. I was half paying attention to Ziggy and half trying to hold my shit together for The Police. I napped for a bit. I guess late nights, sleeping on bad beds and drinking aren’t good cures for a cold. 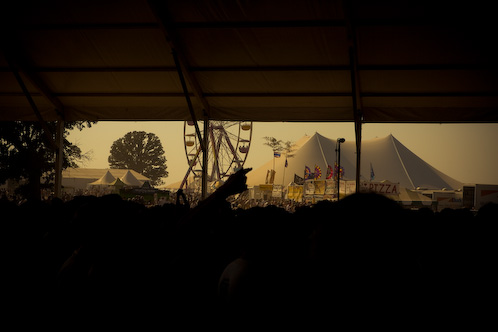 The Hold Steady–We scored a spot inside the pavilion (they refer to them as tents, but it’s a stretch) where it was shady and about 10° F cooler. Unexpectedly fun set from this outfit with a seemingly Tourette’s infected lead singer. He put it to great use. We stayed for the whole set because we were in the shade and the music was good. 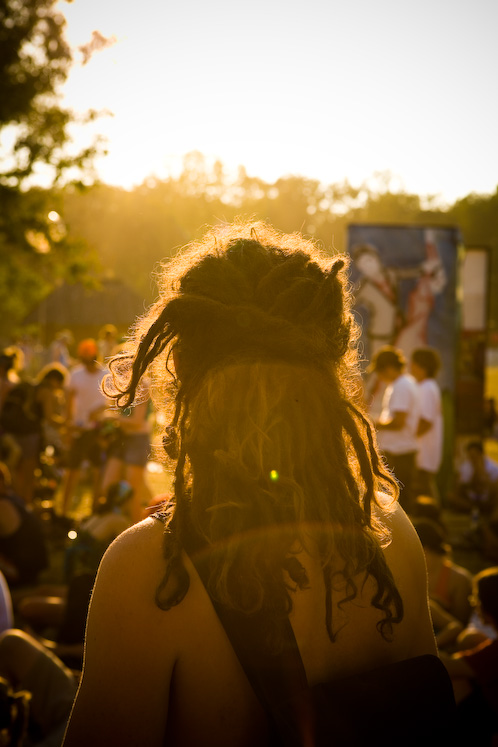 Ween–Heard 2.5 songs. The dust levels outside the pavilion were as heavy as the stage smoke inside. Couldn’t see a damn thing. I got some great photos of people at this point. Decided to head to the main stage to stake out our spot for The Police. 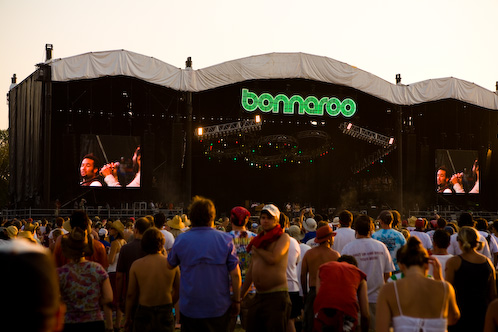 Ben Harper featuring John Paul Jones–Yes, that John Paul Jones. The bassist from Led Zep. He came out and jammed it pretty hard for a medley. One of the defining moments of the festival for me was when Ziggy Marley joined Ben on stage for a goosebump raising version of “Get Up, Stand Up” which even now raises the hair on my neck. Enough people left after this set that we were able to move a little closer to the stage for my precioussssss Police. Thank you, leaving people. 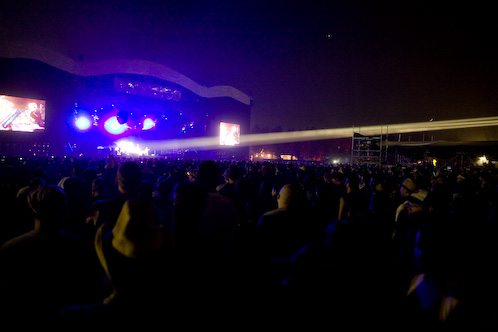 The Police–I had a chance to see them in the fall of 1982. I decided that my newfound love for all things prog (Emerson, Lake & Palmer, Rush, Yes and King Crimson) would preclude purchasing a $18 US ticket to see them in Salt Lake City on the last leg of their Ghost in the Machine tour that year. What was the hurry? They were going to release a new album in the Spring/Summer of ’83. I’d catch them on that tour. I had to see Rush at all costs. Smart. Then The Police hit mega-stardom and implode. Sting goes off on a jazz tangent (first two albums were very good) Stewart Copeland released The Rhythmatist and Andy Summers did a bunch of soundtracky guitar work with Adrian Belew. Which I bought on cassette in 1986 in the bargain bin. No tour for me.

As a high school drummer and aspiring pianist, the internal debate about rock drummers invariably centered on The Police’s Stewart Copeland and Rush’s Neil Peart. A few years ago Ozzy Ozbourne acknowledged that it takes a certain kind of person to sit in the back and pound things. We wasted a lot of time in third hour concert band talking about the contributions of Stewart, but observing that Neil had a much larger kit with things like chimes. CHIMES, people. And not wind chimes. Giant tubular chimes. Peart also had a cymbal rack that did more for Zildjian than nearly any other endorsement could have. I took the bait and pledged my support for Neil Peart. I still go back and forth, but I think in terms of inventive pop/rock drumming, Stewart did some really amazing things to make pop songs more interesting without the need for chemical assistance upon listening.

So I went to the Rush show that fall, and missed The Police, a mistake I’ve thought about far too much over the past 25 years. When a reunion tour was announced, I didn’t do a lot of analysis about the nature of reunions, about the politics or motivations of a tour, I started scheming a way to see them. I knew they wouldn’t come to Salt Lake City. There isn’t a stadium or arena big enough to make the stop worthwhile. I figured there would be some travel, some arranging, but that it would make a great reunion trip with JB and McQueen.

After doing the research and finding that Madison Square Garden nosebleeds were listed at $180 and that those were available only as single seats, the Bonnaroo alternative seemed the most attractive. This assured that the newly poor PhD candidate JB would be attending, as he only had to drive over from Knoxville, TN, while McQueen and I could shoulder the larger expense of flying out. Done.

I figured that if I got to see even one band that was marginally good, it would be worth it.

I knew that I’d be hearing an older band. I didn’t care. I wondered if they would be stripped down or add horns, extra players and background singers, They did not. There was no surprise all-star jam or embellishment. It was a throwback to those first two albums, Outlandos D’Amour and Regatta de Blanc where the music was made by a trio. I worried about songs from their later albums, but the strength of The Police has always been the melody. Sting really anchors the song, with the drums and guitar having a kind of textural interplay that made them stand out back in 1978 or whenever radio stations finally started playing Roxanne. There haven’t been many (any?) bands like them since in terms of texture, rhythm and melody.

The Police were a huge part of the soundtrack to my England years. One of the things that got me through my Mormon mission was the personal stereo with headphones. I would listen to mellow stuff, mostly, but there were times when I’d put on headphones and bury my head under a pillow with something a little more severe. When I had particularly intense 19/20-year old angst, driven by a rigidly enforced celibacy and abstention from typically 19-year old pursuits, songs like “Man in a Suitcase”, “Don’t Stand So Close To Me”, “Can’t Stand Losing You”, “So Lonely”, “Demolition Man”, et al became a perfect aural backdrop to my twilight teen egocentrism. The very act of listening to them was both a protest and a salve. Throughout my time in England, I had distinctive phases… I had the Ghost in the Machine two months and then a revisit to the love-torn songs on side two of Regatte de Blanc. I wish someone would invent a way to force someone to anticipate a second part to a listening experience. The sweet anticipation of hearing “Does Everyone Stare” or “Bed’s Too Big Without You” when I fell hard for a local girl was almost too much to bear.

Watching Sting play “Driven to Tears” on the Live Aid stage (on every television in Britain… we tried to be good working missionaries that day, but everybody was glued to their TVs so we gave in and watched as much as we could throughout the day) didn’t have the same power as it would have been had Andy and Stewart been with him, pounding it out.

I have waited 25 years for this day.

This is already a kind of bittersweet rumination on trying to right an adolescent wrong, but I’ll finish by saying that I sang every word of their set on Saturday night. Every word. I would look over at JB and McQueen and they were both in their own worlds, just as I was. We didn’t say much during the set, other than me hitting JB at the start of the show in a kind of “OMG” kind of a way and then stopping when it was clear my exuberance was ruining the space he needed to go back through the years, just as so many in the crowd were doing. A lot of people didn’t like this set. They are entitled to their opinions. I loved it.

They opened with “Message in a Bottle” and stopped twice for “encores”. Their set was about an hour and three-quarters, all told. They didn’t play “Canary in a Coal Mine” or “Demolition Man”. No rules were broken, but they played the shit out of their songs. I wasn’t as close as I’d have liked, but to get really close, we would have had to stand in line all day for a shot at the front pit. My photos were disappointing but I’ll share some on flickr over the next few days. I decided to not let the lack of Sting nipple shots bother me. Yes, he went topless. I believe it was because of the ego and the heat. Stewart gave him shit and played his bass while a stage person assisted in the removal of the shirt. Sting did not retaliate. I believe that Stewart and Sting were brothers in a past life. Or lovers jilted by one another.

Worth every sacrifice made to attend. Worth it. 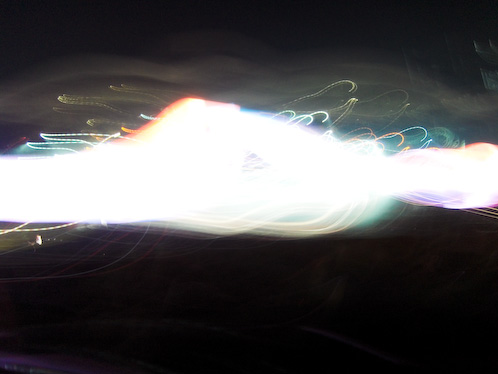 The Flaming Lips–Since our purpose for the trip had been met, we took our time leaving the main stage area and made our way to watch The Flaming Lips take the stage in their amazing way. The problem was that we were about a quarter of a mile away and with post-show fatigue and dust levels that made me wish for an N100 respirator, we stayed for a few songs. The problem with The Flaming Lips isn’t really a problem. A lot of acts struggle with a festival crowd. They are used to smaller crowds and fewer free spirits. A band like the Lips seem contained on even a medium sized stage. Watching them descend on stage called for large-screen monitors and even more grandiose staging. We decided that this wasn’t the best way to see The Flaming Lips. Plus, we were dehydrated, dusty and tired.

The day was called and as we drove back to the motel, we debated rimshots missed (McQueen), Andy Summers guitar solo on “So Lonely” (JB), how much the hi-hat is Stewart Copeland’s bitch (me) and the merits/shortcomings of changed versions of songs in their set. Tempos were varied and a couple of songs were done better than on the recorded version. A great, great day.