Coming Out of the Musical Closet

Back in the craziness of 1989, I started a band with two roommates. We found a scorching blues guitarist who liked the Red Hot Chili Peppers (this was well before Blood Sugar Sex Magik), Living Colour and Fishbone. For a bass player, we decided to hit the music department of BYU. The lead singer approached the pre-eminent bassist, but he wasn’t interested in a “rock” gig. He mentioned a freshman who might be into what we were trying to do. Back then, if you wanted, your class schedule was public information. Great for stalking. The lead singer did a schedule search and went to one of the classes of the would be bass player. We auditioned him and within a month we played one of our blistering three live gigs. The first one was a success, but the last two were room-clearers. After the semester ended, we all parted and went our separate ways (just like Journey sings about, people). The bass player, Kent, went on a mission for the LDS church and the next semester me and the drummer started a ska band, Swim Herschel Swim with a bass player (from two bands prior) along with a singer and guitar guy we knew peripherally.

Fast forward to 1992 and Kent was back from his mission, the ska band in the middle of yet another lineup change, bringing Kent on bass after awhile. In 1991, we auditioned the man who would be the third drummer for Herschel, the venerable Pat Campbell (whose brother steered us towards Kent!) aka patatomic. After that band broke up, Kent and I worked together again (along with patatomic) in a jazz/punk band as well as some odd tracks and bits. Kent and Pat have had successful runs with music, most recently they have collaborated on a couple of loop collections, Brush Artistry and Toolshed Percussion. I can’t recommend these enough. If you are a music maker, these two collections are worth having, especially the latter. Imagine percussion tracks from a Tom Waits album. Lovely, crazy noise.

However, this blurb is meant to be more Kent than Pat. In late 2002/early 2003, I did some logo work and a website (this was in the middle of my pure CSS migration, so cut me some slack) for Kent. He’s got a successful business doing music and sound design. But more recently, he’s launched a business were he sells his and others’ loops. It’s called Beat Hive. You buy loops and song sets to use in Acid and Garage Band, Logic and whatever else will read Apple or Acid audio. It has inspired me to do some music and share a few tracks. As a side note, one of the partners is a guy I worked with at Red Herring as well. Small world.

Yes, I know the site is done in Flash, but being able to preview sounds before you buy is pretty damn cool. If you make music and want to sell loops, BeatHive can set you up. It’s a small operation right now, so it’s not flickr or MySpace or Odeo in terms of budget or staff. But they have sweet sweet audio for an instant compositional crack hit. The info you get as you preview is wonderful if you’re in a pinch and need a certain tempo or key. Plus, I’m proud as hell of the little buggers and happy to see Kent go after something like this.

I’ve made some tracks in Garage Band (mixed in Logic Express) and they use a bunch of loops from BeatHive as well as from the standard Garage Band loops. The best part is that I get to work with Kent and Pat without expensive studio time or trying to schedule trips. You should be able to listen to the tracks I’ve done below. If you can’t see the players or hear the audio, let me know (contact info is in the rightmost sidebar at the bottom) and we’ll try to sort you out. Music is fun again. For me.

1978 (yes, the distortion on the keyboard tracks is intentional and this was almost called “Heist” with apologies to David Holmes and Steven Soderbergh)
Drums by Pat, weird squidgy synth bits by Kent, other sounds are me and Apple.

Desert
Drums by Pat (I think), most of the other stuff is from Shiraz on BeatHive

To Chill
This one is mostly Apple sounds, but I wanted to include it, because I like it.

« Busted: Pervy Polygamist
What Was He Thinking? » 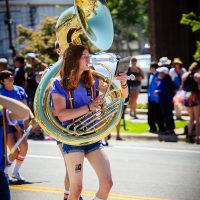