During my senior year of high school, some friends and I published an “underground” student magazine. It was reincarnated from an idea that some upperclassmen had done when we were freshmen and sophomores. It consisted of two or three 8.5 x 11 sheets of paper, landscape and then folded and saddle-stitched. We tried to do it monthly, but that never worked out.

I loved getting together with the guys to type out the issue (we didn’t have computers then, or laser printers) and loved the thrill of satisfaction when we’d get the folded, saddle-stitched things back from the copy shop. I’m not sure if the other guys had quite the same thrill as I did, but I loved working on it. We never put the amount of time into it to make it great, but it was a blast.

I’ve had a few other publishing gigs through the years. A lot of it was purely from the heart… we didn’t make much money, but it was damn fun and we loved it. When I got higher paying and higher profile jobs in publishing, the design end of it seemed geared more like advertising, but without the respect (publishers making horrid design decisions) or concepting time; at least that was my experience. Sure, a business rag isn’t going to want to be arty. The whole process of putting out a pro magazine seemed to be so counter to the independent nature of my publishing experience. It was wholly foreign and left a taste I wasn’t keen on. When an opportunity came to do digital marketing, I leapt and didn’t look back. At least clients pretended to listen.

As with many advertising people, I had the typical “This isn’t really what I’m going to do with my life” hubris. I often would remember the feeling I got reading the Fear and Loathing period of Hunter S. Thompson and the fantasies I had about my own column or my own indie mag. While I wasn’t sure that advertising and marketing would be my thing for the rest of my life, I knew I’d never be able to churn out written work on a regular basis and with advertisers and editorial boards, I wouldn’t fit in at all. Deadlines, schmedlines. Besides, I’m not a writer. I’ve only listed writing once on my resume, taking it off after feeling like a fraud.

I remember a very savvy friend pointing me to Blogger in early 1999 as a solution to having a better way to stay close to college friends than clunky email groups. It would be a way to share photos and stories. We all ended up too busy with our .com jobs to do anything with Blogger.

I decided to start writing stuff on Blurbomat in 2001. I had read blogs before, but it wasn’t like I researched or anything. I didn’t see what the community as a whole was like, or recognize the influencers. I just started to write because I wasn’t doing product reviews (I did a couple for Red Herring and a bunch for URB in 1999 and 2000) and that was the last professional writing I had done.

After hand-coding Blurbomat for months, I decided that there had to be a better way and converted to Blogger after thinking about Greymatter. I had my profile from 1999 and for a few months, I used Blogger with some success. The service seemed to be down a lot and I decided that my host was more reliable. If only there were a solution. I looked into doing a PHP/MySQL homebrewed content management system, but started hearing about Movable Type on other sites. It took awhile before I had the time, but once I did the install, the party was on. Finally, a highly customizable (even then) system of publishing that built my site for me. Not only that, but the native templates were using CSS to display the pages. NO TABLES (the calendar stuff was added in a later version).

I instantly started seeing that the software was powerful enough to use on sites that had nothing to do with blogging and in 2002, started to use Movable Type on a non-blog site. Somewhere in 2002, Heather and I donated to Six Apart, because we both loved the software and wanted nothing but success for Ben and Mena. It was obvious that they had experience designing interfaces and with web content management. The product was strong out of the gate, and could have sold for much more than they were offering it.

As a designer, I appreciated the interface and how, with a little bit of knowledge and a lot of support forum help, I could build sites that would allow the focus to be on the content itself, rather than the means by which that content was produced and delivered.

Movable Type should be listed as one of the key influencers in moving web designers to CSS and away from tables. Lots of designers used it to start sites that talked about design and I believe that in doing so, were exposed to CSS. And Zeldman.

Last spring, during the Movable Type licensing/TypeKey insanity, I was forced to look at other content management systems, including WordPress and Textpattern. It was good to see how far these tools had come and to see how fast PHP was, particularly in regard to making a template change and seeing it render live moments after saving the change.

Six Apart responded to the furor over licensing feees by restructuring them and doing so rather quickly, particularly compared to other software companies. Not only that but Six Apart has hired some of the most involved, brilliant people in the space. From the business side to the development and product side as well as support, Six Apart has hired stellar talent. They’ve made huge changes to the application and they are involved in the communities that their product serves. That’s pretty cool for any company. Sure the competition is also involved in the space, but for a commercial venture, Six Apart is pretty damn cool.

What I’m getting at is that I have a loyalty to the company because it’s helped me stay at publishing online and inspired me to build other sites.

I wrote all of this before the Livejournal/Six Apart merger. I can’t wait to see what Six Apart delivers this year. I’m almost as excited for that as I am Macworld. 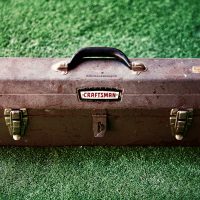 The New (and Old) Face of Dad