We’re going to be fine. Trolls have been a part of our life since at least 2001. Heather is standing up to one in particular, who, it seems, has crapped on others as well, under the common troll guise of “concern” because that troll wants to criticize Heather for posting about her trip to Bangladesh and apparently has the “audacity” to have that post “sponsored”. Yahoo! wants to give a lot of money to charities; Heather has a community with big ideas. Go figure why that’s an issue for a normal person. For a troll? Punch the clock! Time to get to work! Especially when that troll isn’t part of the campaign (the Yahoo! campaign is running across many sites that Federated Media represents). Yet another missed opportunity for a “professional” troll; she’s not in the club! Even more reason to fire up the trolling.

For those paying attention on Twitter to the recent streams of my wife (@dooce) and/or me (@blurb), I wanted to provide a little more context.

As many of you know, Heather just returned from a life-changing trip to Bangladesh. She’s posted about it here and here. I imagine she will continue to share her stories and amazing photos. I think this is just the beginning of Heather doing larger scale charity work; providing voice and attention to those whose voice might be more local and less heard on the scope that Heather can share. The idea that Heather would go on a trip like this has already brought out the concern trolls (Urban dictionary, Wikipedia) that somehow, no matter what Heather does, she is “doing it wrong“. So imagine the surprise from this Guardian piece that ran yesterday:

I think a good critique and questioning is always valuable. So my response wasn’t about a true critique. The headline is clearly link bait. Which seems to have worked. Good for them! Cute mainstream media outlet! However, the deeper issue is one of factuality. The whole piece is predicated upon a major concern troll (Mr. Easterly, referenced in the Guardian piece) who questions the value of aid organizations. Which, in and of itself isn’t a bad thing per se; it’s great to know which aid organizations do good work and which ones are a sham. However, referring to charity work as “poverty tourism” is trollish. Aside from the flawed view that what Heather did was tourism, the author of the Guardian piece made absolutely zero effort to contact Heather for comment or to find out anything more. Instead, the author did what mere bloggers (to borrow the condescending tone from Ms. Davies) do all the time: spout off an opinion about somebody else without reaching out for clarification or comment prior to publishing. If this is how the larger media outlets are operating (it would appear so) these days, then people mentioned should stand up and correct what the reporter/author/media organization is too lazy to do themselves. That Heather has a large Twitter following means that an attempt to correct a gigantic media organization is going to play out in a large scale and will be time consuming. Normally, this is something Heather lets slide. Because aspersions were cast about the motivations for Heather’s trip, the notion that Heather was paid to go on the trip, etc. Heather felt a need to clarify directly with the author. In doing so on Twitter it caused the troll antennae to quiver.

Simultaneously to this misunderstanding and lazy reportage, a huge sponsor landed, offering to donate money to a charity; asking only that Heather post about it and ask her community what charities they like/think are doing a good job. Apparently, this pushed the trolls into a place where criticizing charity is somehow a great thing.

Normally, I would side with the “don’t feed the trolls” line; don’t pay them any mind, they feed on the attention, etc. etc. However, in this case, when genuine charity work for good is being criticized, seems like an unusual low, even for people who have built a career online around criticizing other women. Predictably, that seems to always be the case with the dooce® trolls. They post a lot about Heather, about our family, and then, emboldened due to no response, they make the rounds. It’s always woman on woman hate and it’s always about a deeper issue that the troll hasn’t dealt with in their own life or, in some cases, a clear example of a personality disorder. This is where my post will be decidedly hypocritical, and I accept that there will be those out there who discount this entire post because of that hypocrisy. It is as follows: Trolls don’t deserve clarification. They don’t deserve the direct attention that such an interchange is going to bring. Because they thrive on the attention that will allow them to morph from childish name calling, mean-spiritedness and worse to a “concerned person” with a “different opinion” or “different perspective”. So no, I won’t take the screenshots from twitter, won’t reach out and won’t allow any troll the space or platform to ply their disease. If you feel that this is hypocrisy, so be it.

I should also clarify that I don’t begrudge anyone their opinion or viewpoint. But if a large media organization can get it so wrong and misportray goodwill, what would you do in that case? And then when the heightened troll reflex is to dogpile, what then? What if you are tired of seeing your colleagues equally lied about, made fun of and belittled? What then? I’m increasingly of the mind that one of the beauties of Twitter is that it allows people to stand up for themselves in a public way, regardless of follower count.

I love that Heather called out those who were trolling her charity work. It’s one thing to have a cogent, well-argued difference of opinion. The second clothing choice, hair cut/color, income level, choice in friends or other superficial note creeps in, it’s no longer a critique, it’s being mean. And mean people need to be told they are being mean. Because maybe, they don’t know it. Maybe. If enough people say you’re being mean, wouldn’t you get the hint? If the only people who are your friends are also mean people with bad reputations, doesn’t that send a message as well?

We can never fix somebody who doesn’t want to be fixed. We can stand up for ourselves. We can make a difference. If somebody wants to make fun or criticize good intentions, that says far more about them than it does about the good intention. There have been a lot of people in support of Heather the past few weeks. Those people aren’t slags, sycophants or “blind followers”. They are people who know good when they see it. If you disagree, it might be time to take a personal inventory about your own motivations and your own situation. As an organization, we get asked all the time about who are the good ones in the community; who would we recommend for an interview, a project, etc. etc. We are not alone. Others get hit with questions like this all the time. If you are a slaggy troll, do you think you are ever going to be considered for a serious project? If you do, you are delusional.

Finally, my favorite response from the trolls, and recently this has been a prevalent meme, is that whoever is “doing it wrong” has a PR problem. Sorry, trolls, but the only PR problem is you. It seems ridiculous that I should say this, but if you talk shit about people in public forums, the only people who will be your friends are those who agree with you. That isn’t an issue on the surface, but the second you bemoan the fact that you aren’t “popular” or hang with the “cool kids”, that’s the second you cement your trolldom. It doesn’t matter how well you write; your work is tainted by the issues you haven’t resolved, the friendships you’ll never make or maintain and by the audacity you bemoan no one likes you. Who wants a friend they can’t trust? Moreso, who wants to associate in any way with somebody who’s issues are worn on their sleeve and are unwilling to do the work to make the real change?

This is perhaps the worst argument that people make against Heather: she’s obviously insane because she writes about therapy, mental illness and mental health issues. Sure Heather talks about the work she does in therapy; it helps her see the growth she’s made and shows others that therapy is a worthwhile pursuit, particularly to make changes in one’s life.

This morning on twitter, I received a link to a study published about trolls. Ironically, it’s from? THE GUARDIAN! Lovely:
Dont let the trolls get you down | Education | The Guardian.

A troll is someone “who constructs the identity of sincerely wishing to be part of the group in question, including professing or conveying pseudo-sincere intentions, but whose real intention(s) is/are to cause disruption and/or to trigger or exacerbate conflict for the purposes of their own amusement”.

People disagree all the time. I don’t expect to live in reality and have everybody agree with me or what Heather writes, says or does all the time. I love a good conversation and a good debate. People are entitled to their opinions. Smart people need to share their opinions more; their thinking and reason can elevate a society and educate the masses to new ways of thinking, new ways of problem solving and conflict resolution. One of my favorite thing about the internet is that it has allowed access to more smart people. It has also allowed the masses to be exposed not only to those with similar opinions about things, but also people who don’t share the same opinion. I love reading things that challenge my perceptions, ideas and ideals. I can’t put trolls in the latter, because trolls only serve to pollute reason; their own damaged, diseased psyches providing the overwhelming source that is informing their opinions. I choose to mostly ignore them, blocking when necessary and shaking my head from the sidelines when they say stupid things and show their true colors. I’m happy that Heather stood up for herself and her good intentions yesterday. It’s good to flex your muscles now and then to scurry the rats.

Parents: You’re all doing it wrong.

NSFW Archive: Henry Rollins from a few years ago about selling out. 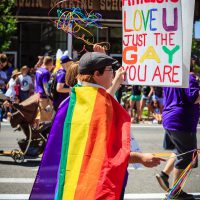