I’ve made a reference before about a music critic on the Sunday morning (Grandpa) show CBS News Sunday Morning. He talks about elitism, smallness and exclusivity, with the implication that being small and exclusive might not be the best way to get your music heard. He was talking about Coldplay. And I can hear the haters already:

Yes, I do. Whatever.

The part of the critic’s review of Coldplay’s album X&Y that really resonated with me was this:

“Since the 90s, a lot of rock has gotten exclusive and elitist and small.”

What struck me about this comment so forcefully last summer when I heard it, wasn’t just that it was so perfectly dead on. It was the universality of what it meant for who we’ve become. And why we choose things like bands and hobbies and movies and television shows and software and sites we visit and how we publish or perform or express ourselves publicly.

Something has to be little-known to be considered cool. Otherwise it’s mainstream. And mainstream sucks. Being big sucks. I used to believe this when I was younger. I used to embody this attitude. There was a kind of mean-spirited quality to it as well. For example, when I was in bands, we’d get pissy when another local band got to go to South by Southwest, or when another local band got a better time slot at a show, or recognized for some great work. Really stupid stuff that was very small. It didn’t make the other band smaller, it made me smaller. And it didn’t really make me feel better in the long run. It didn’t make me write better music or put better energy out there into the world.

I see this nearly every day in the online world. Comment threads and blog posts full of vitriol towards anybody remotely considered mainstream. I’ve been guilty of it as well. Whole sites dedicated to the belittling of the big. When it’s smartly done, and done without ire, I think there can be a valid and necessary conversation. Satire and sarcasm can be wonderful leveling devices. Humor is good. Anger can be good. For example, Enron or a governmental entity. Or Pamela Anderson’s boobs. But if it’s coming from a jealous place or a small place, it’s going to be small in six months or six years and who’s better off?

I’m married to a person with a fairly popular web site. She’s none of the things that the haters rant on about. So many of them fall into what David Pogue at the New York Times calls “online curmudgeons“. But beyond their opinions, however misguided, which they are certainly entitled to, there seems to be a general smallness. Which I think is why, in 2001, when I decided to pursue Heather and make some big life changes, I decided to consciously stop being exclusive, elitist and small. My experiment on this site with openness has often paid me back with huge personal satisfaction and an awareness of others. Others who often don’t agree with me. Watching the same thing happen with Heather and post-partum depression was a truly wonderful experience. Which made the tsunami of anti-advertising commments (and then a subsequent wave of supportive emails to Heather) all the more confusing. “You go girl” vs. “I liked you better when”, with the latter being tinged with precisely what I’m talking about.

To be sure, there is also an element in modern culture of the ever-changing zeitgeist and our constant need for new new new new. But I think that isn’t what I’m getting at today.

This personal choice has made a huge difference in my life. I’ve been able to work through and get through some difficulties without going supremely crazy. I’ve been better able to wish others well. I’ve been less angry on a creative level. Success for others in my field(s) is only going to benefit the field as a whole, and what is my contribution? Anger? Negativity? Or good work? I’m hoping for the latter.

Note: I’ve been writing this for quite some time and have wondered if it didn’t sound too preachy. My apologies if it comes across that way. That certainly wasn’t my intention. Also, I’m aware of pages on this site that fall into exactly what I’ve tried to avoid. 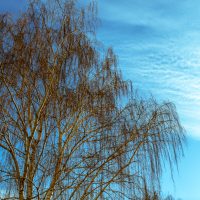 Tree About to Wake