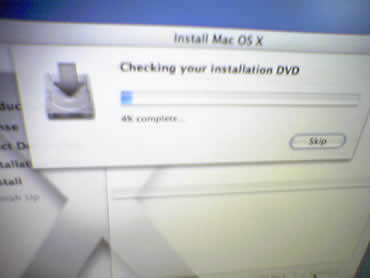 Going Down on the Marketing

After the pain of upgrading to Mac OS 10.3 (Panther) in 2003, I vowed I would wait for awhile before I did another major system upgrade. I looked with interest at Mac OS 10.4 (Tiger) and decided that I’d wait until the bumps had been smoothed out. But I have a lot of email. A lot. 30,000 plus. A better Mail app is ultimately what pushed the upgrade. Apple, your marketing is working. It is important to note that I don’t even hold a candle to Heather. If we decide to upgrade her iBook (she doesn’t have the hard drive space, we’ll have to back up her old comment spam emails), it will take some time for Spotlight to do it’s magic.

I decided I’d do a test and install Tiger on a machine that wasn’t a heavy use, mission-critical machine. I run a lot of quantum physics simulations, and as a contractor, a couple of nuclear powerplants in Europe on a Mac or two. Wouldn’t want to jeopardize the kids by prematurely adopting a new, buggy OS.

After about a week of the test machine working just fine, It was time to test it on a networked machine. Did the install. Everything fine. Photoshop. Fine. Scanner. Fine. Network (Windows). Fine. Ran fine. Suitcase. Fine.

Decided to wait a few hours on the networked test machine. Still fine. Thought that I shouldn’t install at all on the main machine. Then decided to do an install at the end of the day so that if something went wrong, I’d just bail and come back the next morning and either restore or run the install again. 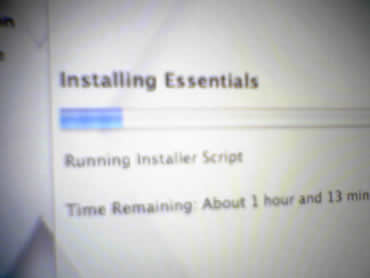 Realize, mid-install that I have a rather funky trackball setup that somehow, in the glitz and sheen was forgotten. And a wireless keyboard. And maybe it wasn’t so smart to just run the install on my main machine, despite a 100% success ratio on two machines. Visions of giant Roy Liechtenstein halftone pop art begin to float through my brain starring me as the tortured premature installer. 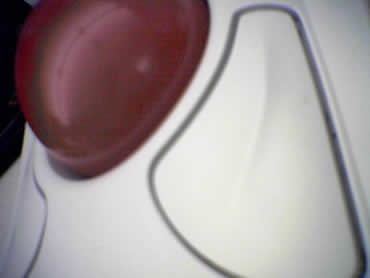 The install was bogging down and the counter was actually adding minutes. It stayed at 16 minutes for 14 minutes and then displayed 14 minutes for 12 minutes and after realizing the math was just too hard, I decided to walk away, and if the machine exploded, well, awesome. 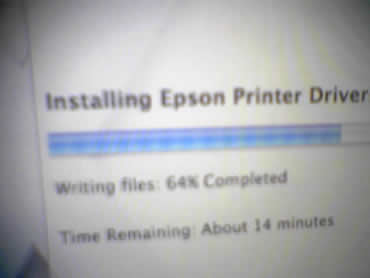 Walked in this morning. Machine was fine. Suitcase. Fine. Network. Fine. Wireless keyboard. Fine. Trackball… not so fine. did some admin and then logged out and logged back in. Trackball is LIVE. I rule.

Tip:
Install it at night. Once you’ve verified that the installer is running. Walk away. The machine will reboot on it’s own and Spotlight will take the requisite hours to index your drive. Optimally, by the time you wake up, your computer will be ready to use and you won’t suffer Spotlight lag. Spotlight pegs the hell out of the system. On the first test machine, an iMac 800Mhz G4, everything was slower than molesses until Spotlight was done.

All in all, feels like a move from Windows 2000 to XP, for the Winheads out there. For the Mac people, back your shit up and upgrade. Unless you are running NASA or NORAD.

Please pardon the quality of the images. I didn’t have the good camera handy. And if you want a real review, there’s always the ever-extensive Ars Technica.