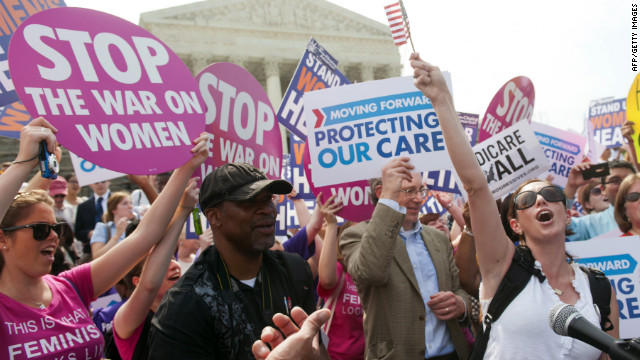 As many long time readers know, I’ve been a proponent of healthcare reform for many years. Today’s ruling by the U.S. Supreme Court that the majority of the Affordable Care Act is constitutional means that my daughters will have more options for healthcare; they will have, as all U.S. citizens will, the option to shop around for insurance. This ability to pick and choose a healthcare plan is the same that the U.S. Congress members have. This is not socialized medicine. This is not a slide into anarchy, chaos and destruction. This is a great thing for the United States. I’m certain that those who disagree with the Supreme Court ruling and disagree with this particular healthcare reform will continue to disagree.

I’m aware that there will be unintended consequences of the Affordable Care Act for any ideologue, regardless of which side of the issue they stand. As for me, I’m hopeful that this law will help to insure more people, improve the level of care and reduce costs to all.

I’ve chosen to say little about the maneuverings over the past few months because it didn’t seem productive. Sure, I hoped the court would rule the way it did, but I tried not to get too worked up publicly.

For progressives, this is a much needed shot in the arm. For regressives, this will be a rallying cry. Hopefully for the electorate, it means a more engaged conversation. I have little hope for nuanced discussion, but I always want people to talk intelligently about an issues, regardless of which side they stand. Rambling, incoherent ignorance gets us nowhere. I’ve not met a single argument against the Affordable Care Act that has swayed my thinking. Given the state of the regressive conversation on the conservative side, it will be interesting to watch the response to the Chief Justice Roberts’ majority opinion.

I also hope that media outlets actually discuss the facts of the law instead of the ideological polarity. My belief is that once Americans understand what exactly the law means for them, they will embrace it. The progressives have done a crap job of

So far, I’ve been most impressed by NPR’s coverage.

“Because the requirement remains for people to have or buy insurance, the revenue stream designed to help pay for the law remains in place. So insured Americans may be avoiding a spike in premiums that could have resulted if the high court had tossed out the individual mandate but left other requirements on insurers in place.”

via: What the health care ruling means to you – CNN.com

“The electoral handicapping will regrettably overlook the decision’s real-world impact on those whom the law is intended to help. At stake in the opinions of nine justices is the well-being of millions of Americans living with chronic diseases such as cancer. They wake up every day knowing that if they lose their job, if their employer decides to drop their health coverage, or if their insurance company raises premiums, they may be unable to get the lifesaving care they need.”

via: For cancer patients, health act a lifeline – CNN.com

“Fielder, a 64-year-old cancer patient from Universal City, Texas, and Levendoski, a 57-year-old San Diego woman with a history of complicated spinal surgeries, were among those with the most to lose from the long-awaited ruling on the Obama Administration%u2019s Affordable Care Act: people with pre-existing health conditions.”

The ruling is a victory for the president, ensuring for now that his signature domestic policy achievement remains mostly intact. It also ensures that the law will play a prominent role in the general election campaign, as Republican candidate Mitt Romney vows to repeal the law if elected.

“In the mad dash to report the Supreme Court%u2019s historic health care ruling before the competition, CNN and Fox News got a bit ahead of themselves.”

CSPAN’s live coverage is breaking to people arguing in the street in Washington D.C. In my view, if people are arguing face to face, there is a chance, albeit slim, that after the expressions of support or disagreement people will actually listen to one another. Once people understand the law and what it does and doesn’t do, I expect the polls around the law will change.

Are you ready for some football?