I’ve long wanted to write a book about my years in the ska band Swim Herschel Swim, a classic college band who dreamed of making it big, but weren’t Weezer. We started in 1989 and broke up in 1993. At the time of the breakup, myself and the lead singer were all that was left of the original line up, and the manager was a case study of not letting a creative be in charge of the money. The manager is an amazing artist and a good musician as well. Not in the classically trained sense in either field, but in a hip, individualistic kind of a way that is frustrating as hell to someone who studies for years and can’t produce work with as much aural or visual power. He could be featured every year in annuals like Communication Arts, but he choses not to play. I always tell people who ask about him that it pisses me off that he’s not out there with his art. I consider it a huge waste of a colossal talent, contrarian writing notwithstanding.

There were times when the SHS band relationship with our manager was akin to that of the Village People with their manager; the manager insisting he was “in the band” (we were not a manufactured band) and no one challenged that firmly enough, so his photo was on the tape and in the band press photo. Imagine P.T. Barnum and Beck combined with a much hipper Donald Trump sans comb over and that was the manager. He insisted on and got equal billing. That’s not to say that he didn’t work his ass off, he did, but it was always very tenuous and awkward to be in a band where the manager upstaged the band 90% of the time. Diving into the fineries of this relationship would probably be about three chapters in the book. I believe no one challenged him because he was doing stunning illustrations for flyers, great bookings and great PR work for us as well as pushing us creatively, not that we all agreed on the direction, but he obviously cared enough to devote his life to the band. And it was through his finagling, schmoozing and balls that we opened for a lot of other acts, including No Doubt, The Mighty Mighty Bosstones and Special Beat.

We were very popular in our college town of Provo, Utah. There were two reasons for this, I believe, and neither have to do with musical ability or songwriting. The first is that the town was and is extremely uptight with nothing to do but rent videos and dry hump. Any band with a hype meister behind them could pull it off, and we were in the right place at the right time to do it. The music was fun and all, but the rep about the crazy shows was what propelled us, each time we played, we packed wherever it was in town, and the insane shit the kids would do made for a fantastic word of mouth and ensure that we’d never play that hall again. Then you have the Mormon element. People who saw us in 1989 went out into the world as missionaries, spoke of the band with siblings and co-missionaries. When people got back to Provo in 1991, or at the beginning of a term, they’d want to see what the fuss was about. So Mormons, number two.

Long story longer: We opened for No Doubt in the fall of 1992. At that point, hiring out places to play was becoming more and more difficult (probably another chapter or two) as the kids got crazier and crowds got larger, so we did the show at a union hall which always struck me as crazy in this reddest of red states. Alas, the steel mill that the union belonged to has long since closed. At the time, we used the back office at the hall as a dressing/green room. No Doubt at that time was not the No Doubt of 1998. Gwen Stefani’s brother Eric was still in the band, and their style was still closer to their ska roots. However, I watched them before they took the stage, and was blown away by their professionalism, closeness and particularly by Gwen. It wasn’t just her beauty, she was hot as hell to be sure, but it was how she carried herself. You just knew she was going to be famous watching her prep for the show and then walk onstage in a cheerleader outfit in front of 500 people in some podunk town in Utah. No Doubt were stoked at the reaction, telling us that they’d have us down in Anaheim, where the crowds responded to them like they did that night in Provo.

Right before we broke up, they came through for us. We opened for No Doubt and a band I can’t recall. I just remember playing a tight ass set, with great stage sound and feeling like a billion dollars at the response. This wasn’t the hometown, this was a big crowd in Cali, man. The highlight of that show was the All Star Jam™ at the end, featuring a surprise visit from Angelo Moore (Fishbone) dressed in a Tiger outfit and duetting with Gwen on the Journey epic “Anyway You Want it (That’s the way you need it)” I still get goosebumps remembering the horns on that song. I’ve long held that if No Doubt had recorded and released that as a single, they would have been more famous sooner. Like they needed it.

The next day, we were on break from shows and Gwen, Tony and Eric took a few of us up to Hollywood to shop and hang out. I remember Gwen talking about marriage and motherhood and how she knew Mormons and they kind of marry young (I was the only one in the crew that day who was married). All of them were extremely nice to us and I bring this up, because of a music critic that I heard on one of the Sunday morning grandpa shows. He talked about how music in the 90s was small and exclusive. No Doubt were the opposite, and their success is well-deserved. If you think their music is shite, you are entitled to that opinion, but they are good people. (Tangential sidebar: when we did grid magazine, the nicest people to work with were Metallica. They fed our people and made sure our photographer was treated well, giving him great access. I can’t say the same for Luscious Jackson. Or Everclear. Oh, the dirt.)

You can imagine then, the strange sense of Costanza-esque worlds colliding after hearing Heather’s report on the Gwen Stefani show.

And the manager of Swim Herschel Swim is still very tight with the No Doubters. He’s got a ton of great photos, some of Ms. Stefani. They are well worth checking out.

Merkeley, I don’t hate you, you retard.

« He’s Keen on Something
Too Much Too Soon » 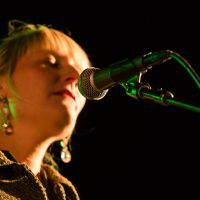 A Pause Before the Chorus

Does He Need Help?