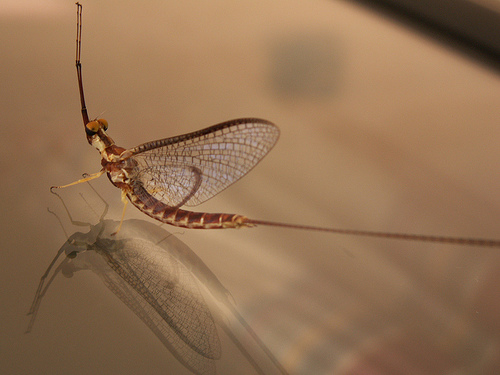 I Tried Not to Freak Out

Warning: bug-related post ahead. Proceed at your own risk.

I was with the dogs in the backyard a couple of nights ago and saw the weirdest flying bug ever. It had smallish wings, a weird body that was kind of bee/wasp colored and a long tail that was basically a large pine needle. By large I mean at least 3 inches. How the thing was flying, I have no idea. I freaked out and spun around to grab something to smash it (I thought that tail might be used to suck my brain out and transmit it to a waiting craft, hovering in geosynchronous orbit). Nearest tool was a shovel. Not the most graceful thing to swing at a bug that might have a deadly venom. I missed. It went away. I got the dogs inside and couldn’t get the image out of my head. I’m uncomfortable typing this right now. Bugs like that are supposed to live in the south. Or midwest. Not in the rockies.

I’ve spent a great deal of time researching what the hell the bug could have been and the best I could come up with was a mayfly. Flickr reveals some things. This one is close. Look at this sucker! See also.

I’m going to shower. And then climb in my hyperbaric chamber for a spell.

« Palm of Some Kind
Leafy Greens »

I Know This Look Well