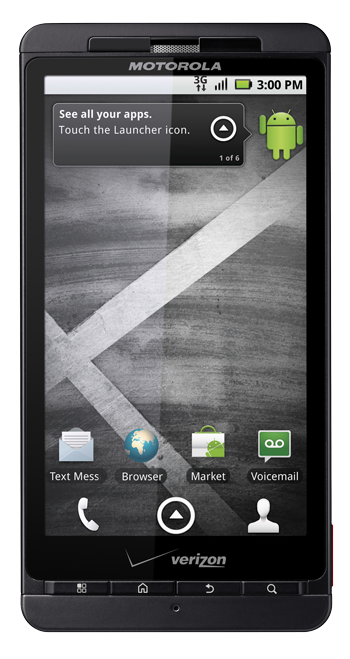 Initial Thoughts on the Droid X

As part of a two month sponsorhip with Verizon and dooce.com, I get to use a Droid X for the business. I was very excited for this opportunity and hopeful that I’d be able to put the phone through some paces in order to evaluate it compared to our phones that we use normally. Verizon did not ask me to write this, but several of you have asked and I thought it would be a good exercise to pull down the writing cobwebs that have clouded me for so long.

The first thing that struck me as I began to use the phone is that I can see the hand of the manufacturer and wireless provider in a lot of the decisions around features and how the phone operates. The Android operating system has a lot of promise and it reminds me of Ubuntu in that it’s very usable for most things one would want to do and has some features that are new to me. Most of what I’ll say in this post will be from the perspective of somebody discovering new ways to do some of the things I’ve done with my other phones over the years.

The best analogy I can think of is that the Droid X reminds me a lot of a ThinkPad laptop; sturdy, solid and chunky. None of those are meant to be negatives. It is larger in the hand than other phones and reminds me a little of a Palm III from a decade ago. The large size accommodates a good size screen; one that is larger than an iPhone screen. As with other Android phones, there are four hardware buttons across the bottom of the screen; a menu button, a Home button, a back button and a search button. While these are handy, getting used to the menu and back buttons took the most time. Depending on how you use your smartphone, the search button can be extremely useful (settling arguments) and annoyingly useless (“I haven’t searched for something in days!”). Your mileage may vary.

There is a lock/sleep/wake button on the top and volume buttons and a camera button down the right side:

A mini USB port and a mini HDMI port are at the bottom on the left side.

The phone uses SD RAM cards for its storage. On the phone I was sent, the phone has 6 GB free space and the SD card has another 15 GB free space. I’m mostly going to use the storage space for photos, but if I can get some time, I’ll try to move some music over to the phone.

The first thing I noticed is that the scrolling is not as smooth as I’d hoped. The bar is pretty high with other phones out there, but a software upgrade is in order to fix some of the jumpiness and scrolling issues. For example, the Twitter app for Android is a great app, but clicking a link from an individual tweet and than clicking the back button doesn’t take you back to the same tweet you just came from. Nit picky? Sure.

The camera is closer to a slow point and shoot and can shoot up to 8 megapixels. As with most cameras at this level, it’s less about the megapixels and more about the camera software. It’s not bad software and having a dedicated shutter release/camera button makes self-portraits and overhead shots much easier than with an iPhone. There are some cool photography apps for Android (i’ve posted a few on flickr).

Calls are ok. We live and work in our home and certain parts of the house are dead zones for cellular phones, regardless of network. All of the major networks available have dropped calls either from us or our guests. The Droid X was no exception, dropping a support call after 10 minutes. From our office, I have not dropped any calls.

Downloading and installing apps is fairly straightforward, but the phone shows it’s geeky heritage when it’s time to manage the apps. Definitely feels like the LInux is showing. That’s not a bad thing if you are a hacker/tweaker/nerd, but if you just want to install apps, it is not as straightforward as it could be. For example, I found a great flickr uploader app called “Flickroid”. It doesn’t work as an App per se, but as a service. Once you install it, you don’t see an app icon anywhere. It’s only when you touch the “Share” button inside a camera app that you see Flickroid. From there, you have to authorize it for flickr. Once you do, it’s very awesome, as it will auto-update any blogs (you can choose which ones with each upload) you’ve attached to you flickr account. In my case, that’s twitter and blurbomat. Sweet! Not so good for people following feeds or my tumblr, but still sweet.

Most of the apps I’ve needed to find, I have. Twitter, flickr, facebook, news, games, etc. However, there is one app that bears special mention and that is “3G Mobile Hotspot” that turns the Droid X into its own WiFi hotspot, using the phone’s 3G radio for internet access. Works pretty well for iPad tethering and for the odd lapotp tethering. You’ll want to make sure your data plan will accommodate whatever tethering you want to do, but this is a killer app and one of the best things I’ve used and liked on this phone. Hearty thumbs up.

This is not meant to be a comprehensive review. Depending on the response, I may post one after I’ve had a few weeks with the Droid X. I intend to check out Salling Software’s Media Sync to move files to and from my Mac. What are some of your favorite apps and services? I want to play!