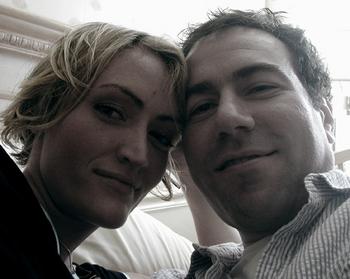 It’s all a Blur

The first time I heard about Heather was at a weekly soccer game in the mid-1990s. I had married and graduated from BYU. I stayed in Provo, Utah to support my first wife through school and to make an attempt to be a rock star. Towards the end of my time in Provo on Saturdays, I played soccer with a bunch of guys that I had become friends with through my music and publishing interests. One of whom was Sam. Sam was a gateway person who had a significant role in my life. We had worked together making ads and t-shirts for a CD store that Sam co-managed. Of that era, the crowning glory was a t-shirt that read “provo rocks topless” with logo of the store on the back. The beauty of that shirt was timeless. Provo, doesn’t in any way rock. It was not ever, nor currently is topless. At least as far as BYU’s PR team will admit. It was in this environment that the soccer games took place.

The men (women seldom played) would talk about their lives in snippets between plays and who their roommates were seeing and not seeing anymore and it was only in brief, guy geek/jock talk that I heard about various women my friends knew or didn’t know or wanted to know. Heather came up briefly, and only in a funny story where one of the women just called her “Tiger” because she couldn’t remember Heather’s name. I believe this is the first time I had heard of Heather B. Hamilton.

These soccer outings were in 1994 and later that year, Sam and I gave birth to grid magazine. We existed on the freelancers that wrote for nothing and did it because they loved music. Heather became one of them towards the end of the magazine.

I had read her writing when I would proof the layouts for any typos, usage errors or text mangling that often happened during the layout of the magazine. There were a few writers on the masthead who had a distinctive style and Heather was in that group. Her writing, even then, was excellent; full of personality and charm.

I didn’t meet Heather until the summer of 1997. The magazine was part of a radio station festival featuring a ton of bands, and the magazine was sponsoring a Chill Out room (wasn’t the electronic trend of the mid-90s awesome?) featuring several DJs and offering an alternative to standing in the sun. We purchased a bunch of thrift store couches so people could sit down and listen to the DJs. What we didn’t bargain for was that the environment would enable young women to take off their shirts and dance in their bras.

Towards the mid-afternoon, as word spread and it got hotter outside, more and more people came in to check out the underwear. I think there were several strippers in the room as they were pulling moves _this_ shy of a lapdance. I watched in bemused silence. Heather showed up at the table we had set up to distribute the magazine and offer water (which ran out after about two hours).

Heather was supposed to interview members of Blur that day, and we were supposed to take some pictures to accompany the interview. Most bands of Blur’s stature insisted we take no photos and use approved images that every other media outlet used. It was always tricky negotiating pictures, particularly the day of the show. Sometimes bands would allow us a few minutes to shoot them (Beck, Blur) and sometimes they would not (Luscious Jackson). I always preferred using images that we made, so that we looked different than our competition. I wanted non-live images, as compelling live shots usually take several shows to get a great image and we didn’t have the budget to send a photographer to go on the road and send us back the great stuff.

On a show day, you never knew what could happen. Sometimes interviews would fall through due to scheduling or band issues and one had to adopt a kind of hyperaware laid back approach. If the interview didn’t happen, could we at least take a few shots and do a phoner later?

Such was the day that Heather and I met. Typically, Sam would contact the road manager, publicist or label person at the show and make the final arrangements. Sometimes, the road manager would find us and have band members in tow. That day, Sam had airport shuttle duties with the DJs and also had our table to staff so it was left to me. Heather and I went backstage to get the process started. It was highly unusual for me to follow-up on the interview side of things, because Sam was always on top of it. I approached Alex James and introduced myself and Heather. He directed us to their road manager. Heather couldn’t believe that I just walked up to him and started talking. I knew Blur was hot shit in England, but at this point in the history of the magazine, I had met so many bands, one more didn’t seem like that big of a deal. I’m not sure, but I think Heather said, “Fucking A, Armstrong. You just went up to him and started talking…”

I noticed Mr. James was reading a book on mathematics, and I instantly saw that as pretentious, however had to give him credit for trying to appeal to the ladies in a more cerebral way. I believe I shared this observation with Heather, but I can’t remember.

Heather was very blown away by how nice I was being to her. In retrospect, there were a lot of unusual things about the day, but because I wasn’t looking for those things, or trying to necessarily impress her, I just did stuff to make the interview happen. Looking back, there was never another time in the history of the magazine where I did more to make an interview happen. That Blur was one of Heather’s favorite bands made it all the more special for her, and I got to be a hero.

I remember feeling a distinct sense of being an older brother to Heather that day. There was something oddly familiar about her but I felt, even then, that she would be like the other characters surrounding the magazine. She would be someone I would watch over the years like Maugham’s narrator in _Razor’s Edge_. I had no idea then that five years later we’d be married and almost seven years later we’d have a child. Life is strange and wonderful, and I can’t imagine being with anybody else, or starting a family with anybody else. I’ve found my best friend and someone who loves me for all of my geekery and the attendant Medusa’s head of cables and detritus that comes with it.