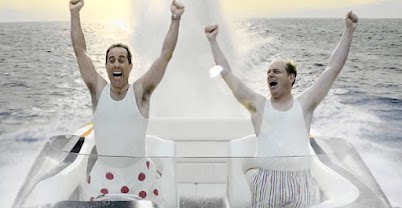 Kevin Kelly, he of the best two letter domain on the internet, on this year’s crop of Superbowl ads:

They are definitely getting weirder, more whimsical, trying harder to catch your attention — while you check your email. They are no longer competing against the possibility of you leaving for the bathroom; they are competing with you re-watching the previous commercial on your Tivo or your iPad.

via Kevin Kelly – Google+ – Next Phase of CommercialsSuperbowl c….

I agree. I also agree with this:

All this suggests that the “natural home” of a commercial is on the internet. That’s where it is born, develops, matures and dies. Its brief, mayfly-length appearance on the Superbowl is primarily an ad to get you to watch it grow on the internet.

This was true in the early 2000s as it is now. Except that we have a multitude of video hosting services and nearly ubiquitous broadband connectivity in 2012. The image above is from this ad, featuring Jerry Seinfeld:

In Kelly’s piece, he mentions “director’s cut” versions of ads. I think the above proves we are already there. And have been for some time.