Larry H. Miller “grabbed a microphone” from a local radio reporter when asked if he had anything to say about the cancellation of Brokeback Mountain at one of his theaters. I can think of a few euphemisms, all unfortunate, for Mr. Miller in this instance. Not sure how many people still care about this story, but here are a few links covering the latest:

KSL’s story. KSL is owned by the Mormon church. They quote a Survey USA poll, which I believe is located here. If you can’t get the stream to load, Crooks and Liars has the story in Windows Media and QuickTime formats. The also-owned-by-the-Mormons Deseret News has a story about the microphone grabbing incident as well.

I wonder where KSL found those 500 adults. Church rolls? That would be a joke. Mormon readers don’t get your sacred underwear in a wad.

UPDATE: Twink, according to Urban Dictionary.

UPDATE: The not so local ESPN’s take. Thanks Nicole for sending this in. Best part: “…coward and a bigot.”

« Converting Someone to the Powder Lifestyle
Losing the Clog Battle »

When Churches Do Good Things 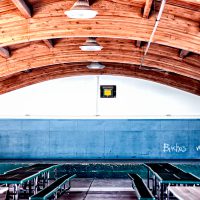 Parents: You’re all doing it wrong.