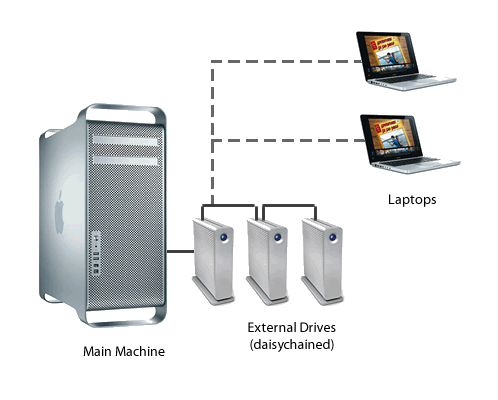 We take a lot of photos. Most of you who’ve been coming here for awhile know this. The problem with taking a lot of photos is where to put them. We each have a main computer, and each has a laptop (photos live on these when we travel) and both of us have slightly different workflows. Our photos in the past have lived on whatever was the main machine in the house, but last year, I got my tower and the problem of managing photos got a lot worse.

For years I’ve wanted to consolidate and then have a multi-tiered, redundant backup system so we didn’t lose anything. We had been using Heather’s machine as the base machine for all the photos by using attached drives:

Each of the external drives was partitioned into two separate volumes. So on drive 1 I had volume 1 and volume 2. Volume 1 would automatically backup/clone the internal hard drive in the main computer, with volume 2 being used for new photos. As that filled up, I’d add external drive 2 and partition it into volume 3 and volume 4. Volume 3 would mirror/back up volume 2. Volume 4 would be used for new photos. This was going on when I heard about the Drobo. The Drobo eliminated the need for multiple external hard drives. I’ll get to the reasoning shortly. The setup for both of us now looks like this: 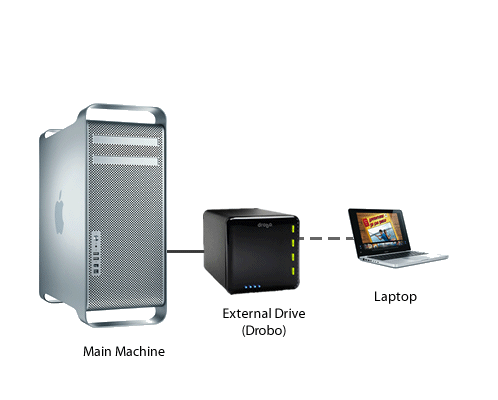 We each have a machine with a Drobo attached and we move our photos off the laptops onto the Drobo. When we get home. I also purchased a portable drive that backs up the photos we take when traveling, just in case either laptop decides to die.

In short, the Drobo is a hard drive enclosure that handles up to four drives. The drives can be any size, any combination of drive. This is not like a normal multi-drive enclosure. The Drobo has some smarts about it. The best part is that you can add drives as you need more storage. I’ve formatted my Drobo to hold up to 16 terabytes of data. Right now, I’ve just got 4 1 terabyte drives, but over time, I’ll be able to expand the Drobo up to 16 terabytes as higher capacity drives become available.

I’m probably being overly cautious at this point, but I’m thinking we’ll buy a couple of more Drobos to back up the original Drobos periodically and stash the backup Drobos off-site, brining them in once a month for a backup. I’m still contemplating this move as it will mean some expense. Still, it would be nice to know that in a catastrophe, I at least have a second shot at recovering data.

Start by shooting in RAW mode to get the most flexible file format (in terms of editing). If you have a newer camera and an older version of Photoshop, Adobe makes a DNG converter app that will convert your RAW files to DNG files. It’s a pain, but doable.

After the photos have been shot, we then move the photos off the card and onto a hard drive. That’s a laptop when traveling or one of our desktop machines. I do not immediately import the photos into an app at this point. The photos are just moved to a hard drive. Here’s my naming convention for the folder(s).

If you have any questions, ask in the comments.