I hadn’t been to New York in 12 or 13 years. I was last there right as Times Square was undergoing its massive change and people were griping about SoHo being overrun by yuppies and the chain stores that sell to them. It’s now a tourist trap/brand touch point for those brands who are willing to pay. It was more crowded than I remember, but I figure that is due to the time of year (holidays) and the weather (excellent 60° F). The counterfeit watch salesfolk spoke under their breath as if it were heroin “watch?” “watch?” “hey, wanna buy a watch?”

Those counterfeit watches used to be the Hard Rock shirt (remember the 80s?) of New York… returning with a counterfeit watch was better than any shirt, though. I always picked up one or two and this trip was definitely different in that I felt no compulsion to buy a fake Rolex. Take fake Holga pictures? Hell yes.

For the first time in a long time I felt inspired to take photos. A lot of photos. While I was worried about Heather’s meeting all Friday morning long, it was nice to walk around Manhattan and Brooklyn taking loads of photos. Later, we set out getting blisters and sharing time, shaking our heads at the insanity of Manhattan. It’s a miracle that the city functions, if you stop walking 80 times as fast as you are compelled and think about it. It’s a lot of shit, a lot of garbage and a lot of wiring. It all works to a degree. It’s also full of amazing people.

I also got to see and meet a ton of other people, no less sterling and awesome. Eating good food and drinking good booze while staying out late and limping home, compact flash cards and bellies full.

However, watching my lady take on the entire cab system armed with a cell-phone and an attitude was something to behold. There are moments in urban living where you must surrender to the tide and surf it like the bastard that it is. Saturday late-afternoon in midtown Manhattan during the very peak of the holiday season was one of those moments. It was laughable how no single cabbie would take us and our luggage a mere five blocks. Couldn’t they head down about twelve blocks and then cut across and come back up? Nope. Easier to roll down the window and ask where we were going and then speed off (one did abandon his cab while Heather tried to make a formal complaint; it is illegal to refuse to take a person somewhere in New York… but try telling that to anybody. It’s pretty clear that New York hates people. Very Kafka slash Gilliam.

Perhaps it was how I appeared after hauling luggage and a large camera bag through Rockefeller Center and Times Square at the peak of holiday shopping that Heather suddenly started calling me Bobby using her best Edie Falco in the Sopranos voice. I can only guess where she pulled it from and I’ll be laughing about it for some time. While I’m looking rather vaguely De Niroesque and asking if you are talking to me while Cream plays in the background and the camera pans slowly around me while you crap your pants at my badassedness.

Aside from the refugee moment/freak show, most of the trip went without incident. And I’m really pleased with the photos that I’ve already shared and will be sharing over the next while.

Finally, I kept asking myself if urban living is worth it. If you want to get ahead and care about your career in terms of The Man, there is no better place to work it than a big city, and likely few better than New York City. But Manhattan is a glorious cluster fuck of epic proportion. And I’m not sure that I have the will to navigate it purely for the sake of hipster cred. I do have the will to navigate it for the profuse photographic opportunities it presents. I do not have nearly enough memory storage to come close to capturing the depth of texture or flavor. But I tried.

« In front of the Dakota
Happy Everything » 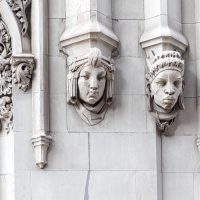