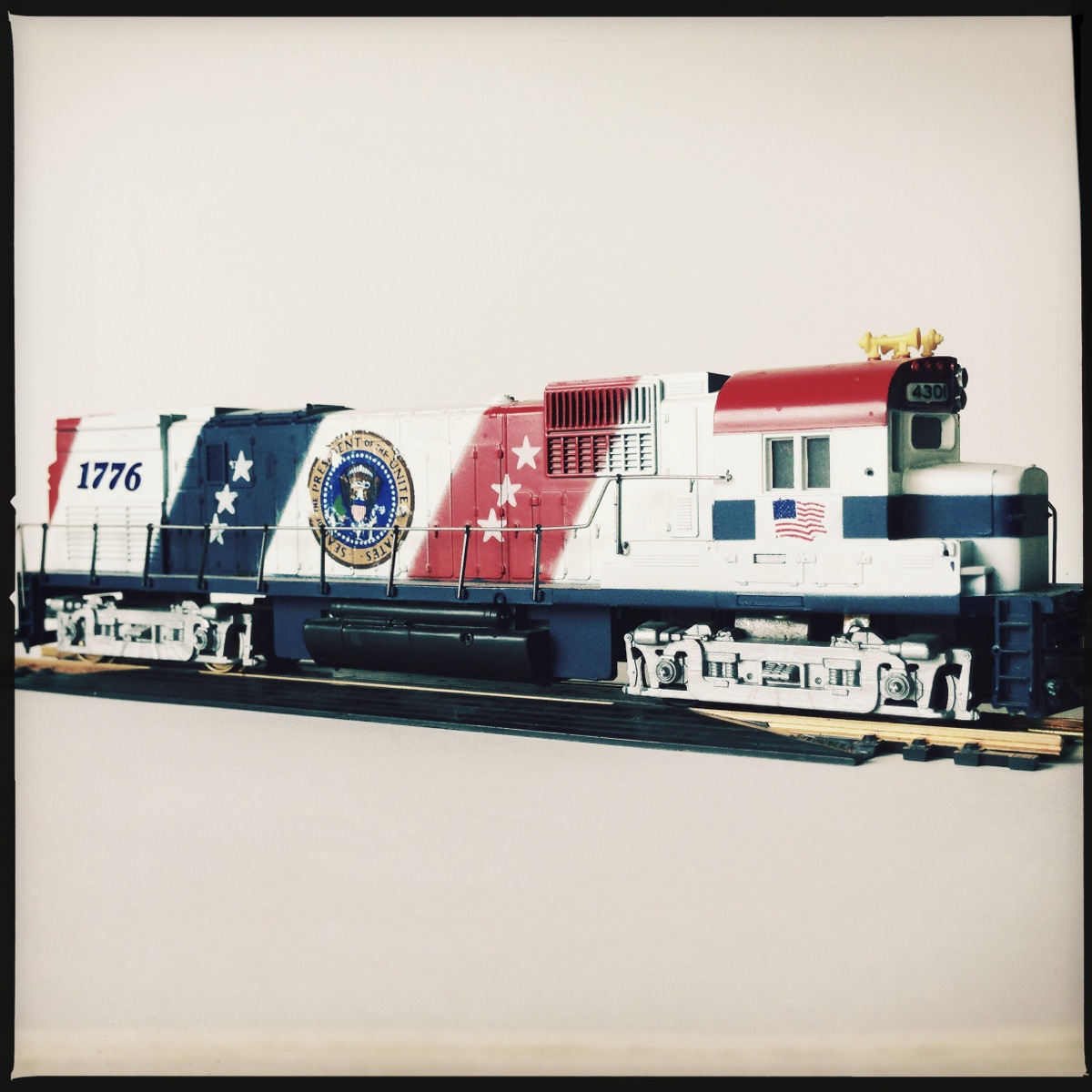 Every move for the past 20 years or so has had me going through boxes, thinning the archives and determining what is worth keeping. Every move means reviewing more and more horrible work from the early stages of my art direction career. Why was I saving that flyer? That mailer?

It always takes too long and usually I give up and repack the physical work in containers as flat and big (and awkward to move) as I can. Some of those containers have been making the all the moves so there is additional sorting and repacking. I’m sentimental so I get lost in the memories and the weight of holding on to something versus letting it go. The typical steps:

Without fail, every single move. Since 1995, I’ve moved every three years on average.

The longest I’ve lived anywhere during this time was the first house I bought in Salt Lake City. That was four years. I skipped the review/sort/keep process in the last two moves (Salt Lake City second house ? big house ? condo) I’ve moved too much crap in each of these moves. Way too much crap.

When my mom passed away, it took a long time to go through her collection of family history, cherished keepsakes, things she had made (big quilter) and also a ton of crap. Nothing has forced me to take a harder look at what I’m keeping and why than spending the couple of months it took to get through my mom’s stuff. I think I got my love of saving things for future projects from my mom. And yes, I think there is a hoarderesque thing happening. I’ve watched the shows, I’ve seen the psychology. It usually goes something like this: Major, very painful and traumatic life event happens, person can’t let go of stuff, holds on to it for 30 years, roll cameras.

I’m not saying there are flattened dead animals living amidst my stuff. Far from it. But there are a bunch of boxes of crap that I’ve held onto for far too long. Things like college notes were thrown out (mostly) a couple of moves back. However, I found another box of college writing and journals. Ok, two boxes. Two for sure. Part of me wants to burn them. Part of me thinks one day my girls might like to read about their dad. Part of me thinks that’s insane, they probably aren’t going to be as sentimental as I am. The past nine sentences happen in my head with each item or group of items I get out of the boxes. Tedious. And also very dumb.

The past couple of weeks I’ve been trying to be more proactive about the archives and be more ruthless. I decided I needed to avoid the usual perfunctory archive thinning and instead I’ve been going through boxes and doing the hard purge, the hoarder-show-level purge, where I really let go. Because it’s time to let go. I’ve held on to some stuff far too long and it’s mostly crap. It’s still very hard. Part of it is about loss. And that’s the part that is the hardest to admit and acknowledge. I’m holding onto some stuff because my dad passed away right after I turned 21. Leta and Marlo will only know him by photos and whatever else I can keep. But I don’t have to keep all of it. Part of the sense of loss isn’t about the passing of a loved one. It’s about mourning the past. It is also about applying a ridiculous amount of weight to the future by asking myself over and over a bunch of what-if scenarios. What if Marlo wants to know what my dad looked like when he was 12? What if Leta wants to know what her grandma looked like when Leta was a baby? What if the girls want to see pictures of their aunts, uncles and cousins from the 80s?

All of this is made more pointed because when my siblings and me were going through my mom’s house, we found a stash of things she had saved for each of us. In that stash, I found a few things that have stopped me cold. I didn’t know she had kept a lot of the things I found. And seeing them again has been a continual series of sensory flushes and gut punches. Such as this Tyco 50th Anniversary/Bicentennial HO scale train that I got for Christmas when I was kid:

The molded plastic and actual metal handrail take the realism up a notch but the airbrush job on the engine is a little weak.

These tractors/dozers were vintage in the 70s and moreso now: 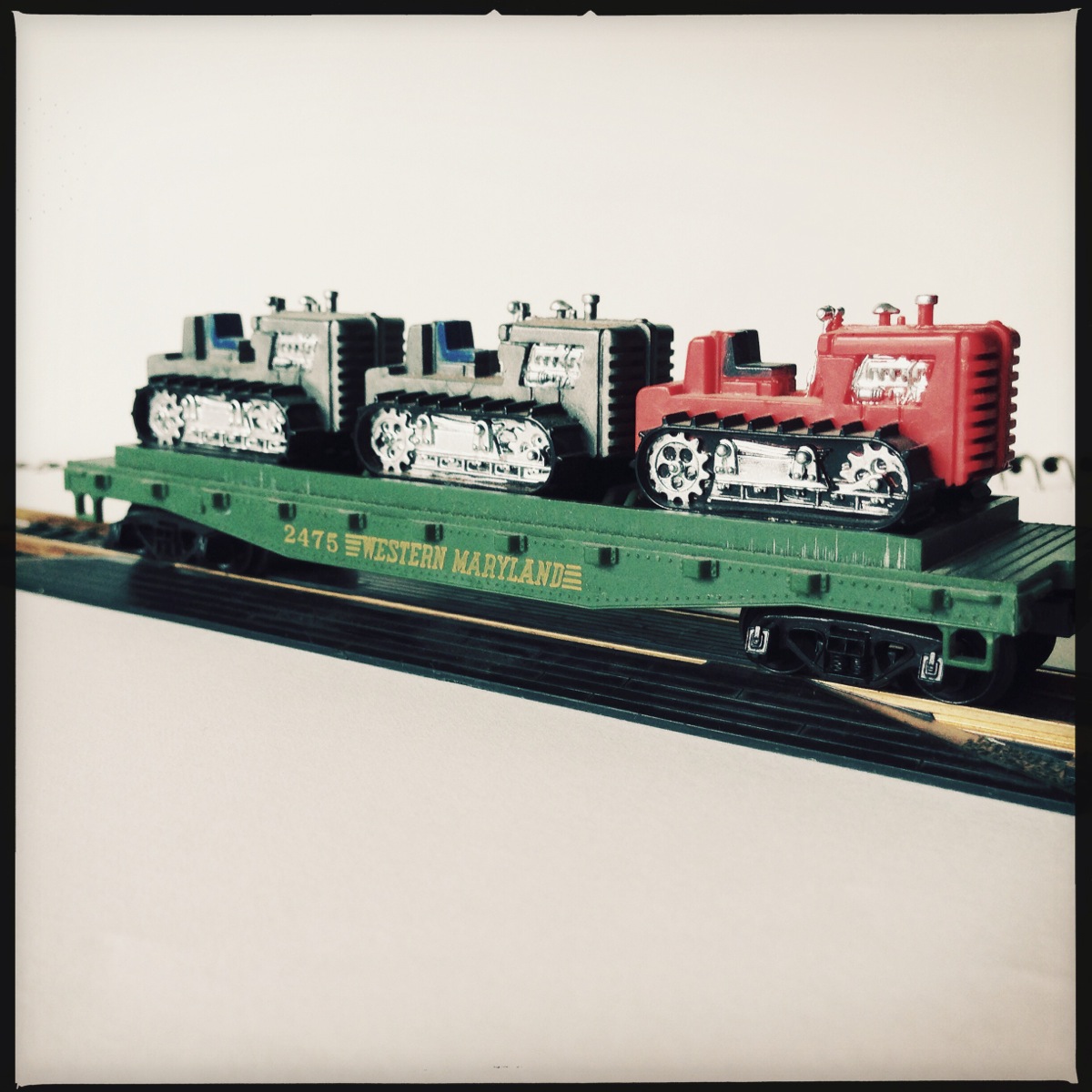 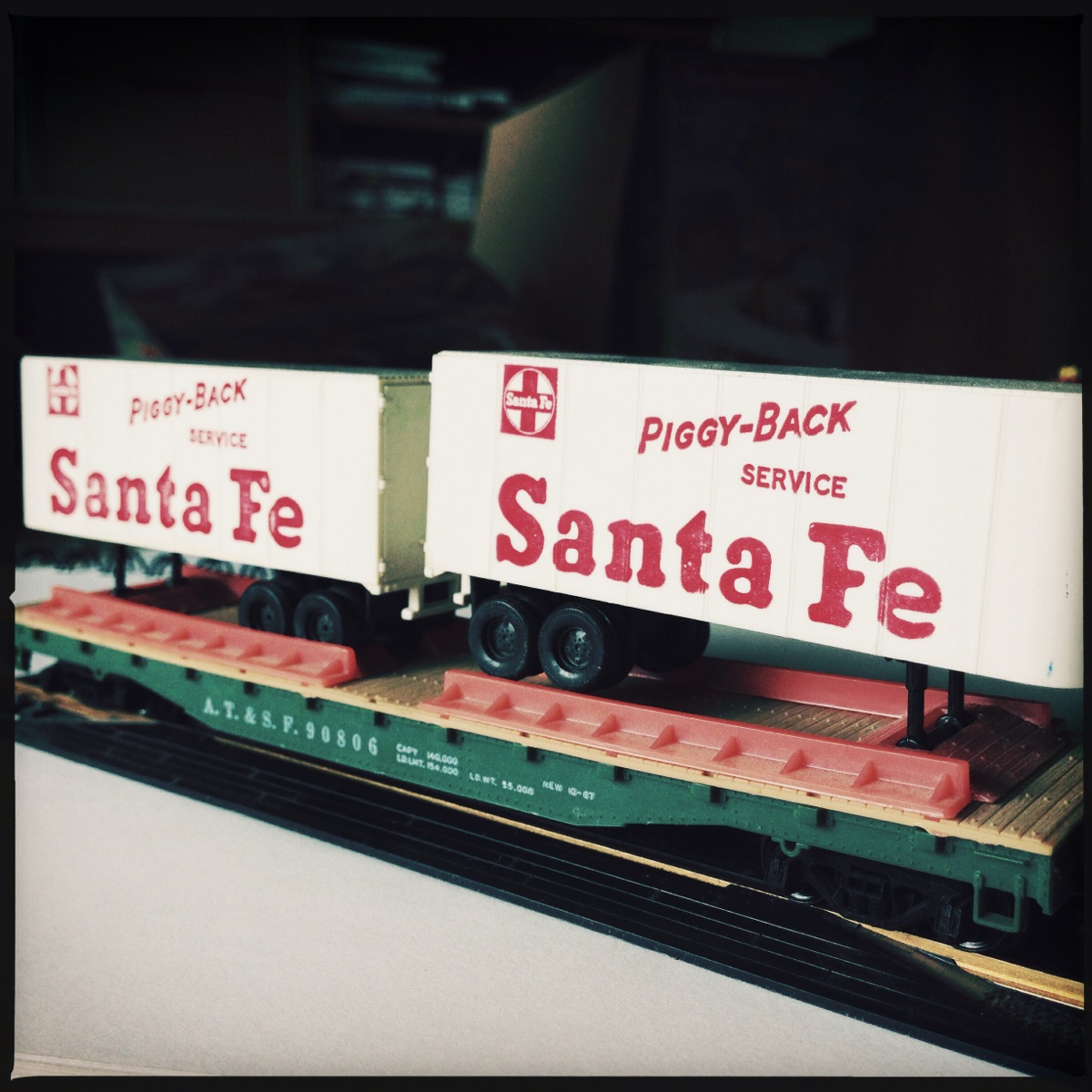 I love the level of detail in the plastic: 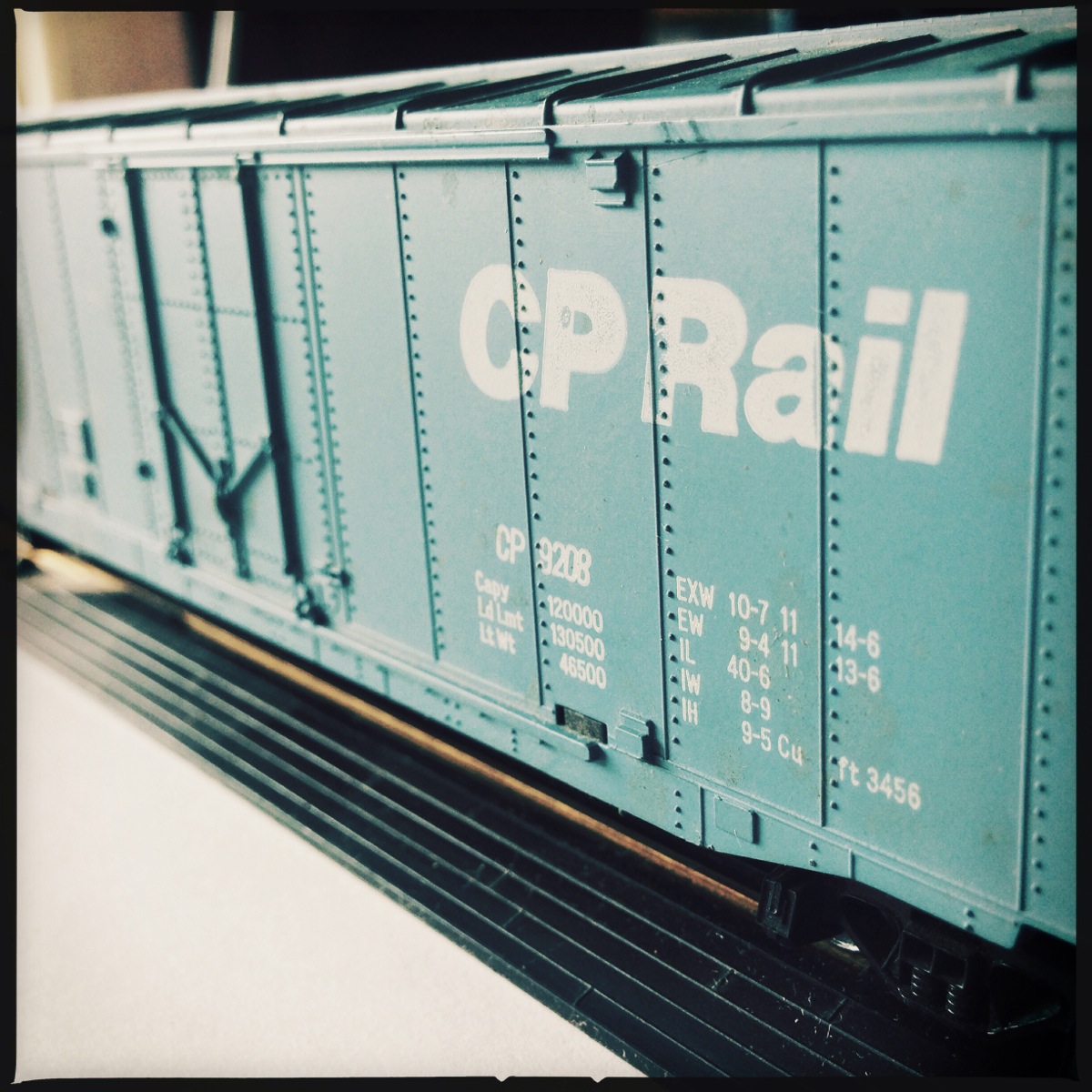 The lumber car has a special track piece that lets the engineer drop off the lumber with a remote button: 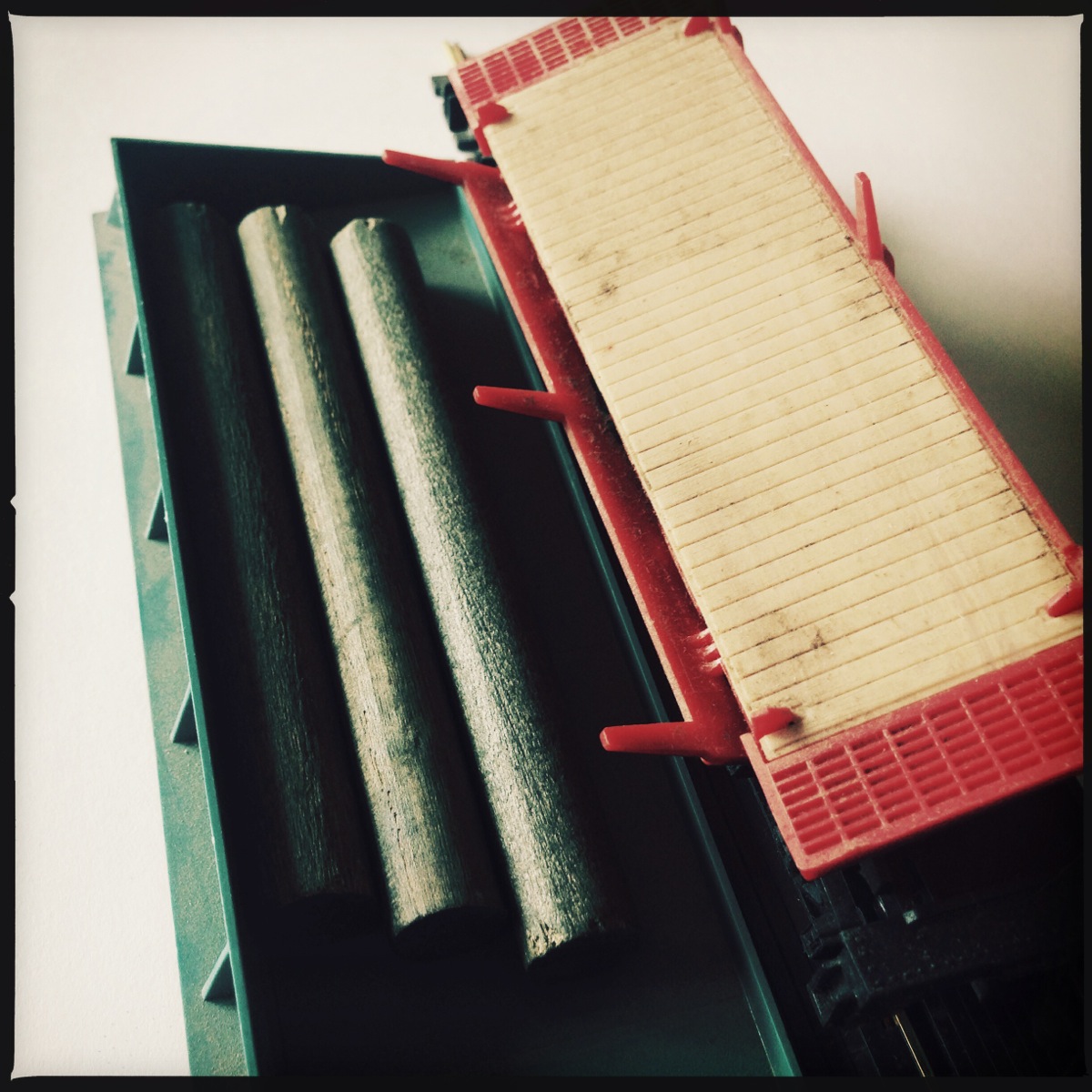 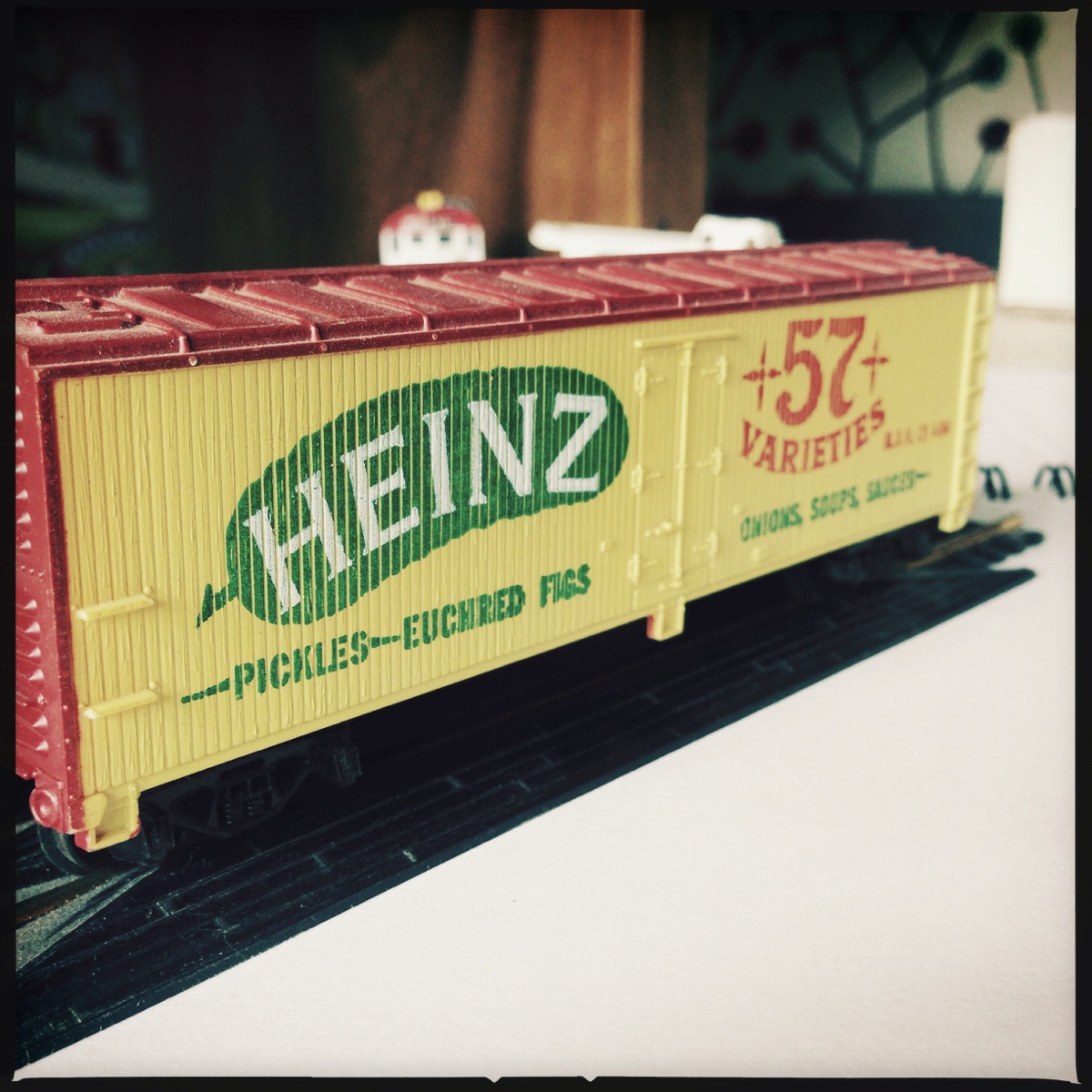 This Texaco tanker rail car wasn’t as well covered, but the dust adds such a nice touch I couldn’t bring myself to clean it up:: 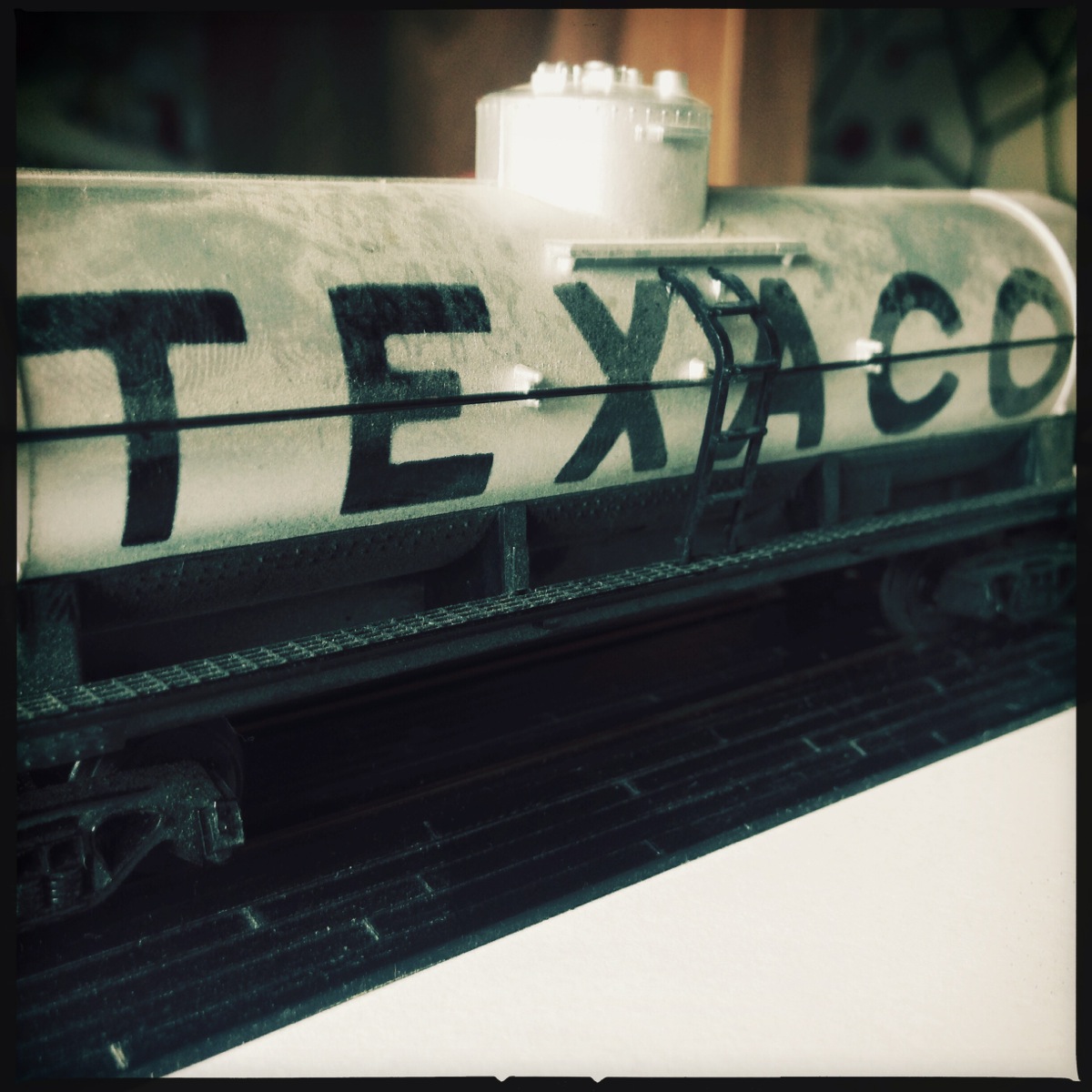 Even so, I’m pushing through. I’ve already thrown out about a dozen boxes of strange paperwork from my past that somehow slipped through the cracks of past moves. It’s feeling really good, despite the feeling that I’m not getting as much done as quickly as I’d hoped. If I get through a box a day, that’s something.

I haven’t decided what to do with the train set. I’m sitting with it for a little while longer.

« Bryant Park Sycamore Trees
7000 Fireworks Go Off At Once »