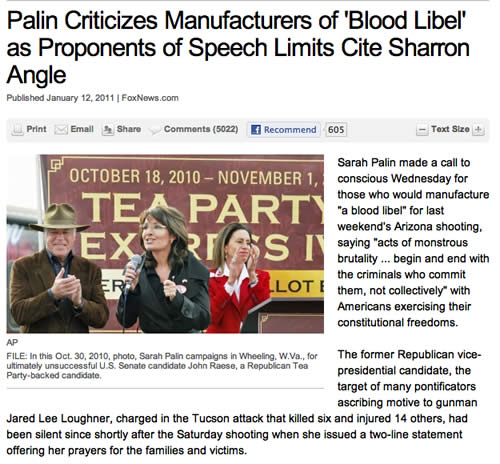 I just can’t quit her.

The Fox piece starts with this and gets worse:

Sarah Palin made a call to conscious Wednesday for those who would manufacture “a blood libel” for last weekend’s Arizona shooting, saying “acts of monstrous brutality … begin and end with the criminals who commit them, not collectively” with Americans exercising their constitutional freedoms.

What exactly does a “call to conscious” look and/or sound like?

(in case the copy editors found that interesting and unfortunate typo)

The linked story also features some quotes from one of my favorite Tea Party people, Sharron Angle:

“Finger-pointing toward political figures is an audience-rating game and contradicts the facts as they are known,” Angle added. “I have consistently called for reasonable political dialogue on policy issues to encourage civil political education and debate. Inappropriately attributing blame of a singular tragedy to achieve a political agenda is contrary to civil discourse, and is a media ploy to which I refuse to belong.”

She’s very consistent. She does use the language: “take Henry Reid out” in the context of the Second Amendment. Here are some more consistent words from this Reno Gazette Journal profile of Angle from last summer.

Condoning violence (even as a candidate for the institution you want to “take out” members of) is a First Amendment right in the United States. As is “Blood Libel”:

The longer I listened, the more it became clear that Ms. Palin does not understand or grasp the concept of irony. If only she’d taken to heart her own accountability and her own responsibility for using violent imagery and speech as she campaigned for Tea Party candidates this past election cycle. If only she’d have reminded the Tea Party about what she calls “peaceful dissent”. Guns at a rally doesn’t connote an image of peace. It connotes fear.

I’d also question just how “respectful” Ms. Palin’s use of her First Amendment rights was, especially during this last election cycle. I certainly don’t want to limit speech. I’ve never been about that. It’s about decorum and expectations we have as a culture. Yes, I’m blaming the “collective we”. Ms. Palin speaks almost with disdain about the collective we in this video. What is a republic if not a collective? Any government is collective. As a former Vice Presidential candidate who has kept herself at the forefront of the media’s eye, she seems to want our attention, as long as we don’t question her. Ever. This is a conservative meme that goes back to Nixon’s famous “when the president does it, that means that it is not illegal” from his 1977 interview with David Frost. As I watched the video of Ms. Palin, I think the person she most reminds me of is Nixon. I’ve never made that connection before, but there is a lot of the same kinds of double-speak in her recent past. When she quit the office of Governor in Alaska she positioned it as “not quitting”. When Nixon resigned the White House, he said, “I’m not a quitter.”

She’s so good at playing the victim, which is another conserative/GOP meme. We are witnessing 1952 Nixon levels of victim (He also said he wasn’t a quitter then, as well). Except without the stilted introspection. For narcissists, introspection is a weakness and their exceptionalism is above reproach.

*Does that include campaign speeches, online postings and marketing materials? Or does that “we” you used only apply to others?

UPDATE: Some great links regarding “Blood Libel” are starting to show up:

And these make the use of the term Blood Libel a big liability for Ms. Palin. Especially as Representative Giffords is Jewish. Talk about insensitive. Now Palin needs to apologize for being irresponsible more than three times.

One Look at Palin and You Knew This Was Coming