At the Rock and Roll Hall of Fame, there are a couple of short films you can see right off the bat. The first is called “Mystery Train” and isn’t really anything like the Jim Jarmusch film of the same name. It’s a kind of mashup of bluegrass, blues, soul, jazz and dixieland performances spread across three smallish screens. With all the attention being given to mashups lately, I was struck at how rock and roll itself is pure mashup. It’s so many different things smushed together and flavored so many ways.

Three things stood out at the RNRHOF:

There was a Tommy exhibition about taking the album and film to Broadway. I wasn’t so into the Broadway thing, but listening to the Who talk about Tommy (and Pete Townsend talk about Roger Daltrey’s chest) was lovely. Hearing John Entwistle talk in his archetypal bass player way was heart-warming. Hearing Roger Daltrey talk about singing “See Me, Hear Me, Feel Me” at Woodstock got me a little choked up.

While the Rolling Stones pretty much encapsulate rock and roll, the Who affected my teenage life more. The Who was vintage when I was a teenager and so I did some mining (there was no Napster in the 80s) and once I heard Baba O’Riley, it was over. That song is at least as strong as Born to Run, but has a certain drama that even the Boss can’t match. I suppose it’s the classic Britpop v. USA Rock debate that has carried on with every British wave…

At some point, I’ll publish the playlist I assembled for this trip, but JB and McQueen had their selections as well. Despite what I wrote about Journey, McQueen opened the trip with Bon Jovi’s seminal (semenal?) “Wanted: Dead or Alive”. We’ve had George Jones, Loretta, Rush (yeah, we included Canada), The Meters, Rebirth Brass Band, Mike Doughty, The Doves, Nitty Gritty Dirt Band, Van Halen, Johnny Dilks, the Beatles, Led Zepelin, Doc Watson, Black Sabbath, Patsy Cline, Johnny Cash, Robert Johnson and the Carter Family amongst several others. 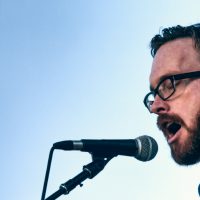 Johnny Marr on Amps, Guitar Tone and How Soon is Now

Song of the Day