I’d like to think that I’m above all the business. But I’m not. I don’t believe in chain letters, or filling out those email surveys that are 70 pages long and ask very personal questions that only a special someone should know. However.

Gail has tagged me with the lit shit. And I’m a sucker for summer reading lists, even if I never read them.

Number of books I own:
Too many to count, but not enough that a garage sale following either my death or catastrophe would warrant embarassment (as in, “lordy, that’s so many books… how did they fit all of them in that house?”). Enough to make a mover grumble and for the shelves in the basement to have to be double stacked (easy with paperbooks, not so much with hardbacks).

Last book I bought:
Technically, Heather bought it, but I read it the second she put it down, Leaving the Saints, How I Lost the Mormons and Found my Faith by Martha Beck. I dig on this stuff, especially when it’s as insider as this one. People leaving any religion is a big deal to me, and when people leave the one I grew up with, I’m doubly interested.

Last book I read:
Mr. Paradise by Elmore Leonard. It was a father’s day gift from Leta or Chuck. I read it on the Vancouver trip and it was good.

Five books that mean a lot to me:
Fear and Loathing in Las Vegas by Hunter S. Thompson. For many years after I read this book, it was the only way to describe how I lived, minus the drugs. I tried to change, but when Heather and I got together, it only amplified after a long silence. I’m speaking of the craziness.

Of Human Bondage by M. Somerset Maugham. I had to choose this from a reading list in an ethics and values class. Like Thomas Hardy, but with the main characters only bruised and battered, not torn apart and eviscerated from the inside out. Reminded me of my time in England, with the ruddy cheeks and staying in the one room that has the fire.

I will be torn a new one for what I’m about to type, but this one really got to me. Maybe because of where I was in my life, maybe because I’m a sucker or maybe because it’s good. I loved A Heartbreaking Work of Staggering Genius by Dave Eggers. Loved it. Maybe because I suffered a slightly similar loss as I entered adulthood.

Airships by Barry Hannah. During my time at a music magazine, I was surrounded by grad students getting Masters of Fine Art (MFA) in creative writing. There is a scene in The Addiction that characterizes your average MFA student; Lili Taylor goes off on a tangent, name dropping authors that only grad students would know with the unencumbered arrogance that only grad students have. Anyway, I asked them what they thought good literature was (we went the rounds about the value of knowing about past works, particularly those regarded as “classics”… I’m a big fat classicist, how bourgeois) and they suggested this book. So I finally bought it used and the stories are so good that one in particular vaulted itself to the top of my favorites. “Testimony of Pilot” blew my shit away. So good.

Of course, I could probably name a dozen books that mean a lot to me and the moment I publish this, I’ll second, third and fourth guess it. 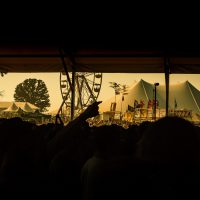