My 2009 alternative title of this track: Hot Mess.

I can’t recall why we decided to call this one “Mahi Mahi”, but this smacks of 1990. This recording is a mess and of the work I’ve done, this one has taken, by far, the longest to remaster. There are a couple of mic hits in the middle and I probably could have edited them out, but given the slopfest that is this track, I’m not too worried about it. As these were essentially live recordings with minimal overdub or sweetening, it just contributes to the chaos. This song really got the kids worked up.

We dropped this from our playlist in late ’91/early ’92 I think. We had better songs and the funk breakdown in the middle seemed weird to me. I loved the super synth horns and all, but we just weren’t that kind of band and as time passed, it was clear we needed to focus on better work. At least to me. I wish my band mates would comment on some of these tracks, because I’m not sure my memory is holding up.

Production Notes
The synth sounds on this one were all my original programming. I also played the triplet figures by hand and boy howdy does it show. Atrocious and embarassing. Probably my least favorite song on the cassette of I WIsh I Had a Raygun, i was glad when we stopped playing it live. So hey, let me share it with the internet: 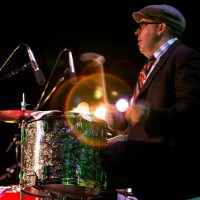