In 1987, a keyboard was introduced to the mass market by Roland called the D-50. It blended a synthesis technique of sampled attack waves attached to digital synthesizer sounds. So things like pizzacato strings and chuffy flutes (for making new age tracks!) sounded great without the storage overhead of an actual sampler. Bowed strings sounded real and it came with its own effects like chorus and reverb. I can safely say that I yearned for this keyboard like only a few other things in my life; maybe four or five other things. During the summer of 1987 I would go to Guitar Center in San Francisco on the weekend and put on headphones and play for a couple of hours, wondering how I could ever get the money to buy this keyboard. I had fallen hard for Yamaha’s DX-7, even going so far as taking a class at Utah State University to learn how to program it. After that class, I decided to hold off on my lust. Then the D-50 came out.

I moved back to Utah in the fall of 1987 and did a year of community college and night classes to try to get into BYU. The summer of 1988 I stayed in Utah, lived at home with my mom rent-free and temped for the summer at the aerospace firm that builds space shuttle boosters. I got a mailer from a Salt Lake City music store that said they are offering same as cash pricing with 90-day no-interest financing. Not thinking I’d get financing (I think I was making $6/hour or something ridiculously low, but seemed fantastic at the time), I figured it was a complete lark. I was wrong. In 1988 I had the keyboard in my possession. There are three instruments that have changed my life. This was one of them.

With this keyboard in hand, I was able to cover more current music and start to work on sound design, creating my own sounds for the D-50 that I could use in the previously mentioned cover bands Room 13 and Scuba Bus.

When Swim Herschel Swim formed, I was able to use some of my favorite custom sounds for the songs we were writing and it made working for $6/hour, getting up at 5am and commuting out to the rocket building complex in the desert worth it.

This track, “Chevy Bossa Nova” was written in the fall of 1989, I think. If I’m not mistaken, this was one of three songs that the original bass player, Russ Cluff, helped write, including the bassline. I remember holding down chords and being surprised when the guys in the band liked the sound and then we wrote a song that utilized it. I was living in a state of constant amazement that fall. One of the greatest things about Swim Herschel was the first six months or so of songwriting. We were all so happy to be in a band and writing songs and playing these insane shows that were packed by sexually starved high school and BYU students.

Production Notes
I’m not sure who came up with the lets-sound-like-the-1930s idea on this track, but I think it moves the track in a good direction. I would guess Merkley and Rod (lead singer) had the most say in the heavy tweaking. This song was meant to be a crowd calmer after coming onstage and watching the kids get worked into a frenzy. I’ve been to some intense shows (Rage Against the Machine, 1993, one word review: fantastic) and the crowds at our shows would be almost as intense as a metal or punk show. Almost. It was kind of fun and scary to watch. So we’d play this song as a way to let them catch their breath and regroup before the next onslaught of songs at 140bpm.

When we added a saxophone to the line-up the fall of 1990, about a month or so before heading into the studio, it made songs like this even better.

On the original cassette tape, the mastering job was pretty much non-existent. We couldn’t afford a real master job and due to the limitations of the cassette medium, the mastering was all about the treble and there was virtually no low end to speak of. I may be over-compensating with this one, but Logic Express has this sweet bass enhancer for mixing that adds subsonics to existing frequencies. Super fun to play with, but difficult to master. The bass line and the kick drum are battling it out for supremacy. Who will win? Turn up your sub-woofer to find out now!

The synth sound on this track was heavily influenced by the soundtrack work on The Last Temptation of Christ by Peter Gabriel. Highly recommend both the movie and the soundtrack. This sound was one of my favorites, especially through a good PA. It demonstrates the power of the keyboard and gives a great atmosphere to the song that is decidedly not ska and not reggae. The low end was awesome and a good audio engineer knew how to make the crowd feel the bass in their genitals. In the studio, the keyboard got killed in the stereo mix, as we were trying to capture a smidge of reggae influence with the kick drum and the bass. Except we were white guys. Recording in Orem, Utah. At any rate, this was always one of my favorites, just because I was always proud of the sound I programmed and the nice bass line from Russ. At the end of the track, Jeff on bass does some sweet noodling on the bass and you can hear a tinge of jazz influence.

Please forgive my ponderous and highly dubious fake timbale solo in the break down. My inner George Lucas wanted to edit this out, but Rick does some sweet real-time effect pedal tweaking and tasty guitar work in that break and I didn’t want to leave that out. The inclusion of the timbale solo on tape was the second dumbest thing I did in the studio during the few sessions it took to make this album. In our early shows, we needed a longer set and the timbale solo would extend this song out a few minutes and give people a break. It was killed sometime before the original drummer left the band in the fall of 1991. 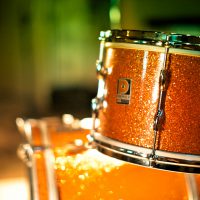