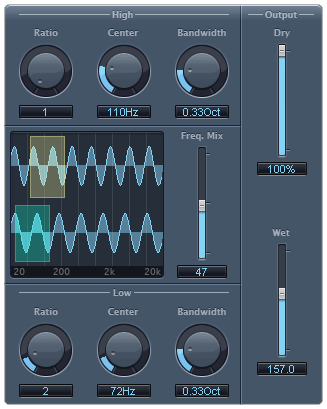 Panel for the SubBass plug-in in Logic Express

Another in the reggae then ska then reggae then ska songs we wrote in the first months. There are two things about this song that I really love. The first is the lyrical content. It’s not entirely apparent, but I believe this song is about a woman in Provo with a decidedly Thomas Hardy bent to how she lived her life. Rumor was that she wanted kids and would lie about birth control to get pregnant, then try to manipulate the father into either marrying her or staying married to her. Victorian hypocrisy laid bare, right there. It’s hard to capture the notion that even in the late 1980s/early 1990s there could be a Mormon woman seducing men to give her children. It seems so 19th century. But so it was. Second, reggae always reminds me of driving in my dad’s 1980 VW Rabbit in the middle of a scorching summer, the AC broken, my shoes off and the windows down. This song always reminds me of summer. Summer is also when we added our sax guy, Sam, to the band.

We took the summer of 1990 off and when we all came back to Provo, we did some summer rehearsals and I’ll never forget the new sound of the sax with our songs; there was a kind of Paul Desmond (listen) vibe to Sam’s playing that reminded me of an innocent and hot summer. Sam looks like Paul Desmond. For some of those early Sam rehearsals, we played in Rich’s (drummer) apartment complex weight room. I believe those sessions were done partially semi-nude or topless. I also remember the feeling of playing with the band again after those few months and it’s hard to explain the exuberance, the feeling of finding something great with these lads that I wasn’t sure would come back after a break and wondering where it might take us.

1990 was a marrying year for the band. Three (four? five?) of us married during that year. The wives were super supportive and without their support, I doubt we could have continued as a band.

When we played our first big paying show the fall of 1990, we had enough money to pocket that would have gone a long way towards making the band a viable second income. However, immediately after that show in the parking lot behind the “Center Stage”, we had a Spinal Tap Moment™ or two discussing what we should do with the money. I think the door total was a couple of grand or so, and after paying the opening bands (at least I hope we paid the opening bands) and taking a few bucks for ourselves (I think $25 or $50 per member) we decided to pool our money and make I Wish I Had a Raygun.

Production Notes
I boosted the hell out of the bass and the subsonics. Logic Express has a sweet way to boost the lows without completely jacking the rest of the mix. Of all the tracks on I Wish I Had a Raygun, this was the one that had the most potential for the standard reggae bass treatment. In our modern age, where subwoofers are the norm, the bass fiends should find their fill here.

This may have been the third or fourth song we wrote. I’m still pleased with Rick’s dub guitar work and Jeff’s bass playing. Jeff was not a formally trained bassist, but this track features some of his better true-to-the-genre playing.

I love the organ sound. Love it. Super carnival fun house and extra cheesy. This was one of the first organ sounds I did on the Roland D-50/Cheesemaster 2000. It’s a pretty good Hammond B3 knockoff, if a little lacking in the analog department.

Fire up your subwoofer: