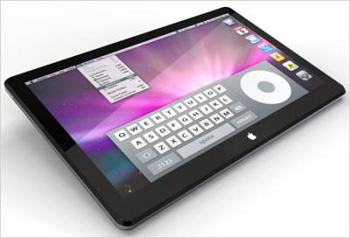 The Case for an Apple Tablet

For those who are not addicted to nerd shit I give you: 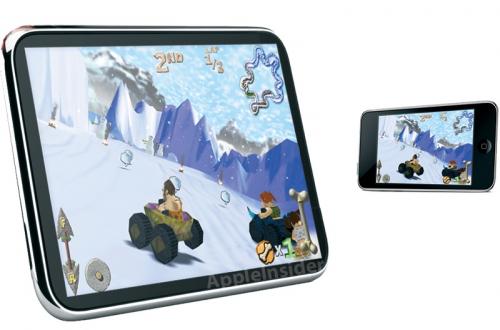 From AppleInsider.com: Report: Hon Hai to build Apple tablets as soon as September

From Engadget: Apple tablet rumored for launch early next year, for serious this time: seriously

In short, he rumor mills are going crazy about a potential new product from Apple. I’ve got no juice or insider anything on whether or not Apple is going to release a tablet in the next 1-12 months. However. Let me make a case for where the best use of a tablet that can play HD video (and have iPhone like apps) might be.

Since Marlo came into our lives and I’ve spent countless hours in a position that is not laptop or desktop computing friendly, I’ve spent a lot of time on my iPhone using it as my main computer. During supervised naps (we’re sticklers about SIDS) I’ve been reading Infinite Jest on my Kindle and on the Kindle app for iPhone 1

I’ve also been reading and approving comments on blurbomat using the WordPress app as well as Tweetie, facebook, Email, etc. The iPhone is perfect for the space between 1 – 3am where Marlo has been on my chest as I burp and soothe her back to sleep. The iPhone is perfect for these moments where my hands are semi-tied. I think a larger screen with a touch interface with a Kindle app on it would make a killer reader, one that I could lay beside me and flip pages as I hold my baby. It would also be awesome for those times when I wasn’t holding a baby.

Back in 1999, I remember the first rush of ReplayTV and Tivo to market and seeing Tivo in operation. I remember having big conversations with colleagues about how you’d be able to pause TV while watching a show like Friends and hit a “Shop” button and your remote control would turn into a mouse while a shopping overlay floated above clothes, furniture, knick knacks and other stuff onscreen. It would take product placement to a whole new level and offset advertising losses from people fast forwarding through traditional ads.

At the same time, WiFi was beginning to appear in consumer form thanks to first generation iBooks/Airport Base Stations and it didn’t take long for me to see that rather than relying on a set top box and clunky remote to navigate an overlay, we’d have our WiFi laptop nearby so that when we paused TV, we could have the overlay sent to the laptop where we’d be able to purchase the shirt that Ross had on or Rachel’s top or the couch in the coffee shop. Except that none of that has come to pass. Yes, we can fast-forward through commercials and pause TV. Cool. But we can’t do much more than use a web browser to schedule recordings on our DVRs in terms of the technologies interacting.

With a tablet from Apple and an AppleTV, things could get interesting in this regard, however, I think we’re a long way from being able to order Dr. House’s shoes while we’ve got the episode paused. At least a long way from using the show itself to provide the linkage to the product.

YouTube has done some very interesting things with tagging and commenting on video content while that content is playing, but we’re still in the beginning of this kind of technology and user fluency.

Currently, “Video on Demand” usually means a timed window to watch something and requires a broadband connection even if you already are getting 2 (or more) HD streams from a satellite or a higher end cable box from your cable company.

However, being able to have a screen big enough to tell me what’s on my TV without having to cover up the content on my TV is somewhere we could be tomorrow. The iPhone and iPod Touch have a slick Remote app that displays art from whatever library is being controlled as well as a great way to search for stuff and play music and video from the connected library. That functionality on a larger screen would be cool and open up a lot of possibilities for new ways to interact with content.

One scenario that pops up quite frequently at our house is a “Where have I seen that actor before?” question that requires a pausing of the program and a laptop or iPhone imdb.com search. Having a tablet talk to my media player and have cast & crew info already in front of me means I can check it during commercial breaks without stopping the action. Which, while super nerdy, would be cool.

The other scenario that is perhaps the best reason for a tablet is this one. Right now, Marlo is sleeping with us in our bed. We’re slowly introducing a standard “this is bedtime” environment to get her to sleep. However, Heather and Marlo usually nod off before I can get to my Daily Show or Colbert Report. I break out my laptop and stream stuff on Hulu, but the laptop/bed posture is sucky. Watching stuff in bed on a laptop isn’t the best. If I had a simple tablet I could hold (which, admittedly, I do with my iPhone, but it’s not the best for watching long form content), I think that is an interesting use case and one that might be far more likely on things like flights and long mass transit commutes; watching video.