The New Face of This Dad

Last fall, I took part in Movember as part of a team of dad bloggers/personal publishers. Philips-Norelco ponied up razors and trimmers for the Movember shave off as well as donated a bunch of money for prostate cancer research.

For Father’s Day, 2012, Norelco asked some of us (UPDATE–here’s the list: Whit Honea, Jim Higley, Clay Nichols and The Didactic Pirate) to film a video of ourselves answering some questions about what it means to be a father today, proud moments of parenting and what we hope to teach our children. I didn’t get emotional during the shooting, but I did keep circling back to how important it is for my daughters to know how much they are loved and wanted. I tried to keep it from getting too platitudinous, but it’s hard when in parenting mode to not go there. I wrote about the changes I experienced becoming a father in 2006 which this paragraph sums up nicely:

“This all may sound extreme, but I’m convinced that I’ve been given the opportunity to be a big part of my child’s life. Most men only dream of such a gift. It’s going to be just fine if my [golf] handicap stays where it is or if I never pick up a golf club again. Teaching Leta a new song or what sounds letters make is far more rewarding than smacking a maddeningly small ball around for a few hours.”

During 2012, my life has been in major transition. I’ve wanted to keep my personal emotional roller coaster ride away from the girls as much as possible (neither of them read blurbomat.com) and just be there for them; help them know that regardless of where their dad is living, there is always a place for them and that I love it so much when they stay with me. I didn’t go into that at all in the video, but I think it’s something that more fathers are doing for their kids; being more emotionally attuned to all of their children’s needs (emotional, intellectual, etc.) and communicating their love more directly with their children.

In my video, I did address the thing that is the biggest difference in my generation of fathers compared to what was expected of my father’s generation of dads: more men are doing more of the day-to-day work for their children; changing diapers, cooking, feeding, bathing. And this is happening regardless of marital status and regardless of their career. One issue I didn’t bring up that bears discussion is the more men are starting to talk about our changing role as fathers and doing so in a more public way. However, not enough men are engaging publicly.

In 2006, I did an interview with Jason Avant, publisher of the fantastic Dadcentric, where I answered his question about why more fathers don’t express themselves online compared to mothers. Here’s what I said then:

“Men aren’t big on self-expression? Most men don’t stay at home with their kids? Men are archetypically lame communicators? If it’s not one of those three, I’m guessing that it might have to do with how women multi-task. Women are about 6000% more efficient with their time around kids than men are. Without fail, every women I’ve seen with kids and a task list will complete the tasks well before the men do.”

Before the pitchforks and torches come out, those last two sentences need an explanation. I was trying to be funny. More seriously, more women have made the time to write and share online. Back in 2006, a lot of men weren’t making the time, or if they were, they weren’t as vocal about it and it didn’t capture the media attention the way women did. Regarding time management, that interview was six years ago. I’ve improved my efficiencies dramatically. You’re going to have to take my word.

The men I met at Dad 2.0 in March helped me see that modern fathers who share their experience online do have a vibrant community of diverse voices and experiences. So when I got tapped to contribute to a video about fatherhood, I jumped at the chance. The final version should be out later this week and I’ll be sure and link to it once it’s live.

Note: Thanks to Philips-Norelco for sponsoring this post. We’ll be gathering on Twitter using the tag #newfaceofdad, Thursday, June 14, 8-9 pm EDT. I hope you’ll join us. 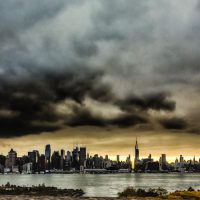 Turning This Car Around Episode 50: Fears and Dogs