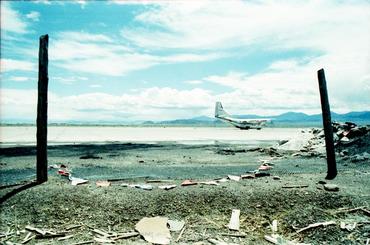 Taken in Wendover, Utah, June, 1998 while moving to San Francisco. 35mm cross-processed. I think this was E6 to C41, but i can’t remember. This plane was used in the filming of Con Air and someone was killed or injured and the plane was fenced off and parked on the same runway that the Enola Gay pilots used to train for the World War II atomic bomb drops.

I want that object you are pointing at me