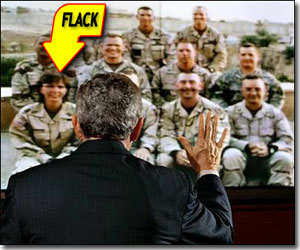 The Tide is High

Despite the spin of the White House and it’s cronies, here’s more proof that FEMA was run in a horrible fashion. It would appear that Brownie did not in fact do a heck of a job. At least at anything other than making people wait for him. Who had the idea to blame the locals? Because, like so many other things (WaPo, registration may be required) in regard to the current administration, it just keeps getting worse. Especially when your own people turn on you. For all of the post 9/11 talk of Bush leadership, it’s getting very hard to see any credibility where the words “leader” and “George W. Bush” are linked.

This all seems so similar to the Watergate era of the Nixon administration in so many ways. Unpopular war, inflation, high energy costs and growing dissatisfaction with the way things are going. I remember being perplexed as a child by Watergate. All the players, the constant news and the hearings interrupting my afternoon TV were too much for my young head. When Nixon resigned, my family was pretty upset and I wanted to know why. One of my sisters explained that the President lied and that for a person in that position to lie meant that he needed to leave.

What about this President and his players? It will be interesting to see who, if anybody falls in the next few weeks.

All of the links in this blurb were found via Talking Points Memo. Crazy times, man.

« Technicolor Leaf
Look it up »

How the Sausage is Made (but not touched)

The Hypocritical State of the Union