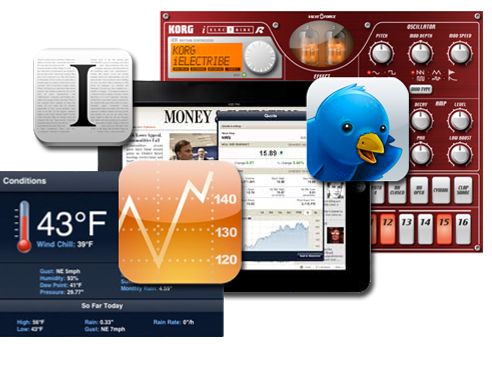 Thoughts on the iPad

About 20 minutes after I had my first iPhone in hand in 2007, I knew that I wanted a similar device with a larger screen, especially using the browser in those early days. As the applications (both programmatically, and literally) for the iPhone grew, it only made me want something larger I could use instead of my laptop as a reader whether lying in bed or as a travel companion instead of a stack of magazines and/or books. I did not intend to use the iPad for “content creation” or expect that it would be powerful enough to do photo editing. My use case was as a casual reader, browser, twitter reader and maybe the odd email. I’ve been pleasantly surprised on all those counts.

Twitteriffic. The original Twitter reader got a re-write for the iPad and it shows. Fast, slick and well designed. Works great with Instapaper (See below). I do wish it told you when you have messages and mentions, but it puts those in your timeline. Usually works unless you haven’t checked your account for awhile. Paid version supports multiple accounts, free version has ads and supports a single account.

Instapaper. The perfect app for the iPad. If you want to save a link to read later, you install the bookmarklet in your browser toolbar and any URL you visit, you can click on the bookmarklet and a text only version is saved for reading later. Since Instapaper is a “cloud” app, you sync it from login on any device. I can catch up reading from a browser, through the app on the iPad or the app on the iPhone. Really slick and a great way to save links that you see in your Twitter stream or anywhere else.

News apps. I’ve subscribed to the Wall Street Journal (not bad, despite a strange typographic problem which results in a bad line leading (line-height for CSS nerds) that affects the last line of a paragraph. The NYT Editor’s Choice app has the same problem. I think it’s a bug. Doesn’t matter, just a weird quirk. Despite the whining, I love being able to read the news part of the WSJ (I avoid the opinion page as I like my blood pressure where it is) and not have to recycle a bunch of paper every day. I subscribed to the print version for a couple of semesters in college and damn the amount of paper is crazy after a few days. I wish I could subscribe to the New York Times. Why? Because I think reading the news like this restores some of the meditative qualities of doing something without a thousand blinky things distracting me. And I’m of a mind that quality content is worth paying for. Free doesn’t scale and doesn’t mean better content. It can mean better content, but most often it does not. I also like the free Reuters apps for quick, raw news headlines. They have a news app and a photo gallery app. Very nice. For research, the free Bloomberg app is pretty tasty as well.

Video. Movies, podcasts or streaming via Netflix (app needs work; it’s super slow and not really optimized for the iPad) or ABC’s streaming app. It’s fantastic to be able to let Leta watch something on the iPad and not worry about battery life or her destroying a hard drive. I want to test this in travel mode to see how well it holds up, but so far, despite the clunky speed issues, big thumbs up on streaming video.

Korg Electribe for iPad. Fantastic drum/rhtym machine/synth that replaces a $450 dedicated hardware box. I paid $9.99 for it. I think it’s $19.99 now, but if you are a musician, it’s almost a no brainer. Fun as hell even if you never create your own music and just mess about with beats. Blows away the notion that the iPad isn’t for serious content creation. Yes, it can be playful; yes it can also help write music.

Drawing Pad. I bought this one mostly for Leta. She loves to draw rainbows. You can save your work and pull it off to a computer and it has stickers, markers, crayons and different paper types. A lot of fun for not very much money.

Flight Control. Thanks to Firemint for the freebie code on this one! I bought Real Racing HD, their other iPad game and then we got a press pack with codes. They are not paying me to say any of this. Holy cow this game is addictive. I have to budget time to play this one. I’d be writing about this or Real Racing whether or not we got the press pack, so breathe easy.

Gilt. Time based shopping. I haven’t been moved enough to buy something, but this is what early .com shopping sites wanted to be. Some nice interactive touches and plays to the strengths of the iPad.

Cool Hunting. Really beautifully designed app that serves as a way to experience their site. Love how clean the interface is and how they incorporate images across the top of the stories. First app I’ve seen that makes me think putting the mothership on the iPad would be dead sexy.

Wired. Yes, it’s “expensive”. So is a single issue. Being able to hear songs they mention and experience infographics through a touch interface is straight up game changing. They’ve done an amazing job. Absolutely amazing. If you are an interactive designer or just want to see what the future holds, the inaugural issue is it. Very inspirational. I can’t imagine how much work it took to launch.

If you have questions I haven’t touched on, let me know.

« How you load the dishwasher matters
Glenn Beck: Bubble Boy »