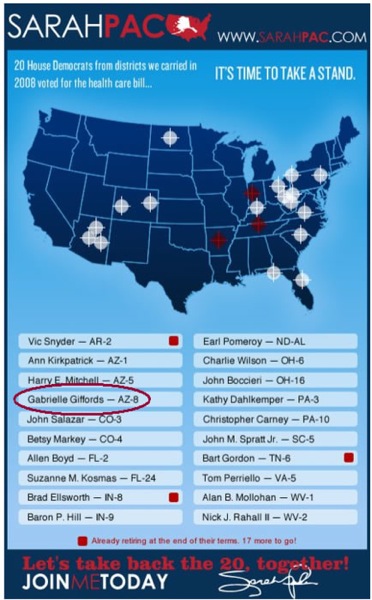 Upset, Sad, Shocked and Only a Little Surprised

Regular readers know that I’m no fan of Sarah Palin or the Tea Party. My disdain stems from the Bush-era holdover attacks on reason, intelligence, ration, sanity and language.

This attack by a likely schizophrenic person with a legally obtained semi-automatic handgun was made easier because of Arizona’s new, relaxed handgun law.

I’m angry about this for a few reasons. The shooter needed mental health help. Did he get it? Ever? Will he? How much stigmatization will occur over the coming days and weeks as this event is discussed? One of the best things I read about the link, or lack of link, between mental illness and violence was this Slate piece by Vaughan Bell entitled “Crazy Talk“:

“A 2009 analysis of nearly 20,000 individuals concluded that increased risk of violence was associated with drug and alcohol problems, regardless of whether the person had schizophrenia. Two similar analyses on bipolar patients showed, along similar lines, that the risk of violent crime is fractionally increased by the illness, while it goes up substantially among those who are dependent on intoxicating substances. In other words, it’s likely that some of the people in your local bar are at greater risk of committing murder than your average person with mental illness.”

“The fact that mental illness is so often used to explain violent acts despite the evidence to the contrary almost certainly flows from how such cases are handled in the media.”

I like this George Packer piece from the New Yorker (thanks to a lot of people on Twitter for sharing this):

This relentlessly hostile rhetoric has become standard issue on the right. (On the left it appears in anonymous comment threads, not congressional speeches and national T.V. programs.) And it has gone almost entirely uncriticized by Republican leaders. Partisan media encourages it, while the mainstream media finds it titillating and airs it, often without comment, so that the gradual effect is to desensitize even people to whom the rhetoric is repellent. We’ve all grown so used to it over the past couple of years that it took the shock of an assassination attempt to show us the ugliness to which our politics has sunk.

Over the last 20 years, there has been a marked increase in violent language and imagery used against people and parties in power. Beginning with the election of Bill Clinton, his opposers launched horrifying attacks. The GOP, despite being the majority party in Congress from 1994 to 2006, used their power to keep Ken Starr investigating nearly every step of President Clinton. It didn’t end well for Clinton or for Newt Gingrich. President Clinton was impeached by the House and Gingrich lost his Speaker position. The coordinated systemic attack from the conservatives during that period was something to behold. The AM dial, long dominated by conservative hosts (and who I listened to during 1992-3) made it a daily effort to discredit and delegitimize President Clinton.

When George W. Bush was declared the winner of the 2000 election, the independent prosecutor bill that allowed Congress to invoke an independent prosecutor was allowed to lapse and not be renewed. President Bush’s policy decisions were decried by liberals, as would be expected. There was no “liberal” media outcry to the second war in Iraq, the suspension of Habeas Corpus or the myriad signing statements or anything else the Bush administration did. Even if you can find stories from the media, they are nothing even remotely close compared to the daily outrages of the Clinton and now Obama eras across the conservative media.

During the 2010 midterm election season, failed Vice Presidential candidate and person who quit as governor of Alaska halfway through her term, Sarah Palin continued to build her brand on the back of guns, ammo and sex appeal. Even though she failed to help John McCain get elected in 2008, Palin has become a powerful campaigning force. As part of her efforts to help the Tea Party candidates get elected, she released the following graphic:

Many decried Palin’s use of this kind of imagery and language she was using on Facebook and Twitter, as well as her public appearances. The most damning irony is that Ms. Giffords herself warned of using heated rhetoric, saying that there would be a consequence for such acts. David Weigel has a great piece on the denial gymnastics that Palin’s PR people are did yesterday on a conservative podcast (Ms. Bruce, the host of the podcast is introduced as “a chick with a gun and a microphone”). From the Weigel piece:

MANSOUR: I just want to clarify again, and maybe it wasn’t done on the record enough by us when this came out, the graphic, is just, it’s basically — we never, ever, ever intended it to be gunsights. It was simply crosshairs like you see on maps.

MANSOUR: It’s a surveyor’s symbol. I just want to say this, Tammy, if I can. This graphic was done, not even done in house — we had a political graphics professional who did this for us.

I don’t buy that the “surveyor’s symbol” was ever meant to be taken as such. This is ass covering spin. Palin herself (or whoever is paid to tweet for her) posted this gem on March 23, 2010. Screenshot (in case it is deleted):

Why would Palin need to spin this? Because Palin had “targeted” Ms. Giffords specifically:

In case you missed it, that was Ms. Giffords herself speaking out. Horrid, terrible irony.

Even worse, Giffords’ opponent in 2010, Jesse Kelly, used the language, “Get on target” and “help remove Gabrielle Giffords from office” and “shoot an M16 with Jesse Kelly”. His campaign website has been scrubbed. However, the Arizona Star reported on the event here:

Jesse Kelly, meanwhile, doesn’t seem to be bothered in the least by the Sarah Palin controversy earlier this year, when she released a list of targeted races in crosshairs, urging followers to “reload” and “aim” for Democrats. Critics said she was inciting violence.

He seems to be embracing his fellow tea partier’s idea. Kelly’s campaign event website has a stern-looking photo of the former Marine in military garb holding his weapon. It includes the headline: “Get on Target for Victory in November. Help remove Gabrielle Giffords from office. Shoot a fully automatic M16 with Jesse Kelly.”

Of course, the scrubbing of Kelly’s site and others (Palin’s Facebook page is being scrubbed near instantly) only seems to indict both the Tea Party and the GOP leadership for not speaking out against violent rhetoric.

The only example so far that I’ve been able to find is this piece on Politico.com:

A senior Republican senator, speaking anonymously in order to freely discuss the tragedy, told POLITICO that the Giffords shooting should be taken as a “cautionary tale” by Republicans.

“There is a need for some reflection here – what is too far now?” said the senator. “What was too far when Oklahoma City happened is accepted now. There’s been a desensitizing. These town halls and cable TV and talk radio, everybody’s trying to outdo each other.”

Swearing off the rhetoric of violence by Joan Walsh on Salon.com

Armed and Dangerous Again by Ruth Calvo on Firedoglake.com

Grief and Shame by Derek Powazek on powazek.com

These are sad times. Sadder that those who know better won’t speak out against what they’ve done to contribute to this awful event. o

Can’t Win Them All