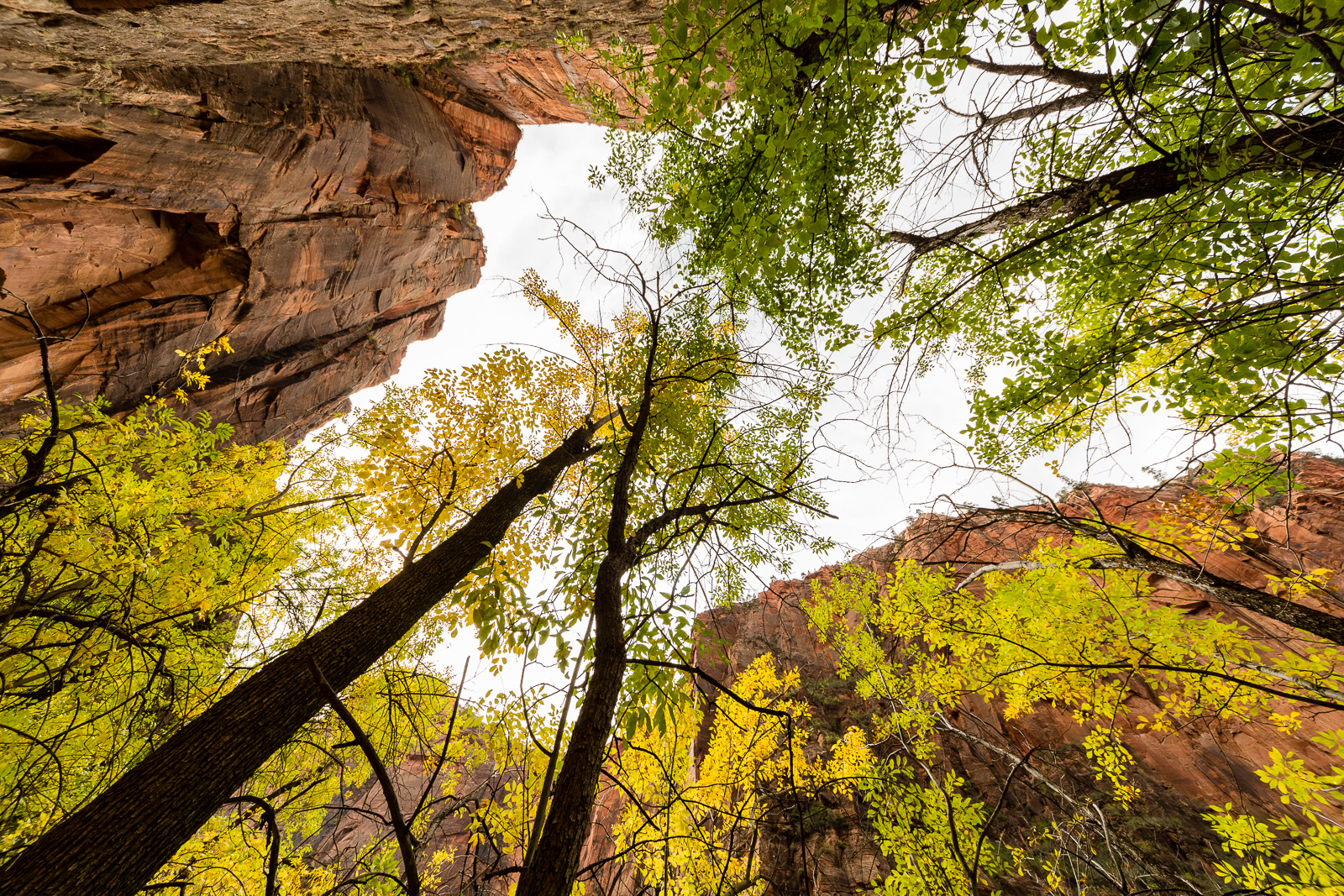 When I was four or five years old, my family took our first camping trip to Zion National Park. It was during spring break and would become a family tradition. The park wasn’t too popular for most of the 1970s, until 1978 when George Willig and Steve Matous free-climbed the formation called Angel’s Landing. The climb was televised live for two days in April 1978, on ABC’s Wide World of Sports You need to click this link. Trust me.

We postponed our trip that year and tried to visit over Memorial Day. We couldn’t get a camping spot in the park or a paid spot outside the park and we ended up spending our weekend at Bryce Canyon National Park. Not a bad deal, but it’s not the same as Zion. Over the years, one motel after another opened up as the camping spots became more difficult to secure. We learned our lesson and stuck to camping over long weekends in spring for the next few years after the Willig/Matous climb.

Once my dad got sick and passed away, we never camped as a family in Zion again. A few of us would gather on certain years, but we didn’t have a full family trip again. I didn’t make it back to the park until 1989 with my brother (but not the whole family) and a couple of years in the 90s with my other brother. There was a spring trip in 2002 that involved camping and a pretty large group of my family, but after that trip, I didn’t make it back until April of 2013. During that 2013 trip I decided that in 2014, I would bring my girls, even if it was just us and not a larger family gathering.

It’s strange to experience something that had such magic and so many memories with my children. I had to let go of the bittersweet feelings about them not waking up in a cold tent trailer in heavy and smelly vintage sleeping bags, laughing while somebody got up and boiled water for hot chocolate or pretend coffee. My family drank Pero, but only on camping trips. My girls won’t know that smell or what that feels like. I had to let it go when I booked us a room in a Springdale motel for fall break and hoped that they would like Zion National Park at least as much as I did as a kid, even if their memories would be vastly different from mine. 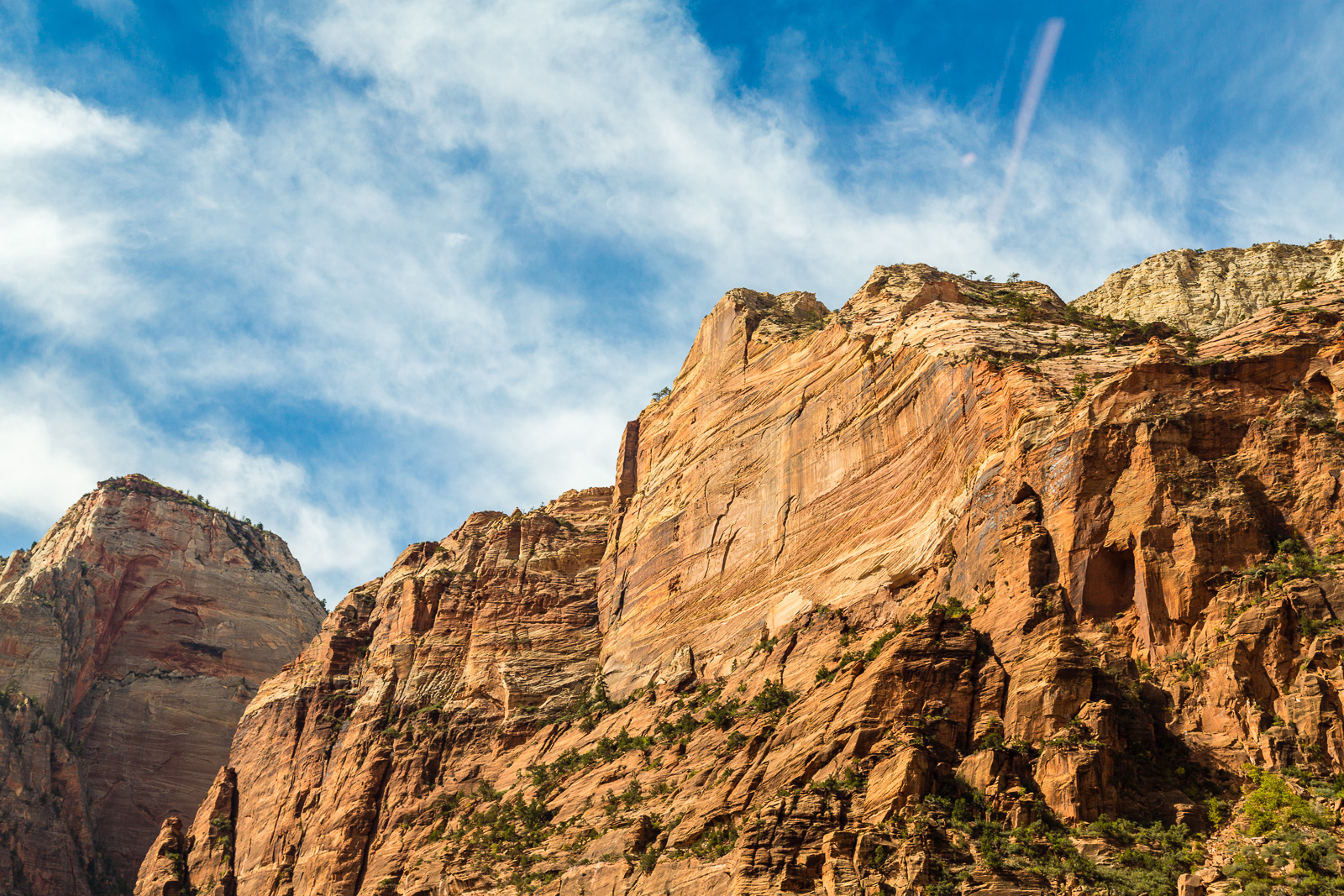 During my 2013 trip, I was stunned at how the town of Springdale had changed so much from those early trips. It is still very small, but back in the 1970s, it had very few signs of modern civilization. There was a tiny supermarket and a single gas station. There was not a motel you’d want to stay at. Camping was cheap and plentiful. My girls won’t know what it’s like to be dropped off at a possible campsite while the rest of the family in the station wagon circled the loops to see if there was a better spot. If my mom found a better spot, another kid would be dropped off there and the car would circle back and pick you up. I had to let that go.

The park changed to a reservation system somewhere in the 1990s and started a shuttle bus service, with buses fueled by natural gas, to keep the pollution from cars down. So instead of driving and circling to find a parking spot inside the park, visitors get picked up from a waiting area inside the park.

Getting inside the park involved a walk from our motel to a Springdale bus stop, a bus to the end of the line where we walked a quarter of a mile to the entrance of the park and then on to the line for the shuttle buses. I didn’t think much about that distance until I got there with girls in tow and realized that Marlo probably wouldn’t have a hard time in the morning walking to the bus, but after a long day in the park, she might not want to walk back without assistance. Fortunately, Marlo did much better than I thought she would.

I had to warn her about the chipmunks. Visitors feed the chipmunks and because of that, they are super aggressive and not afraid of people. 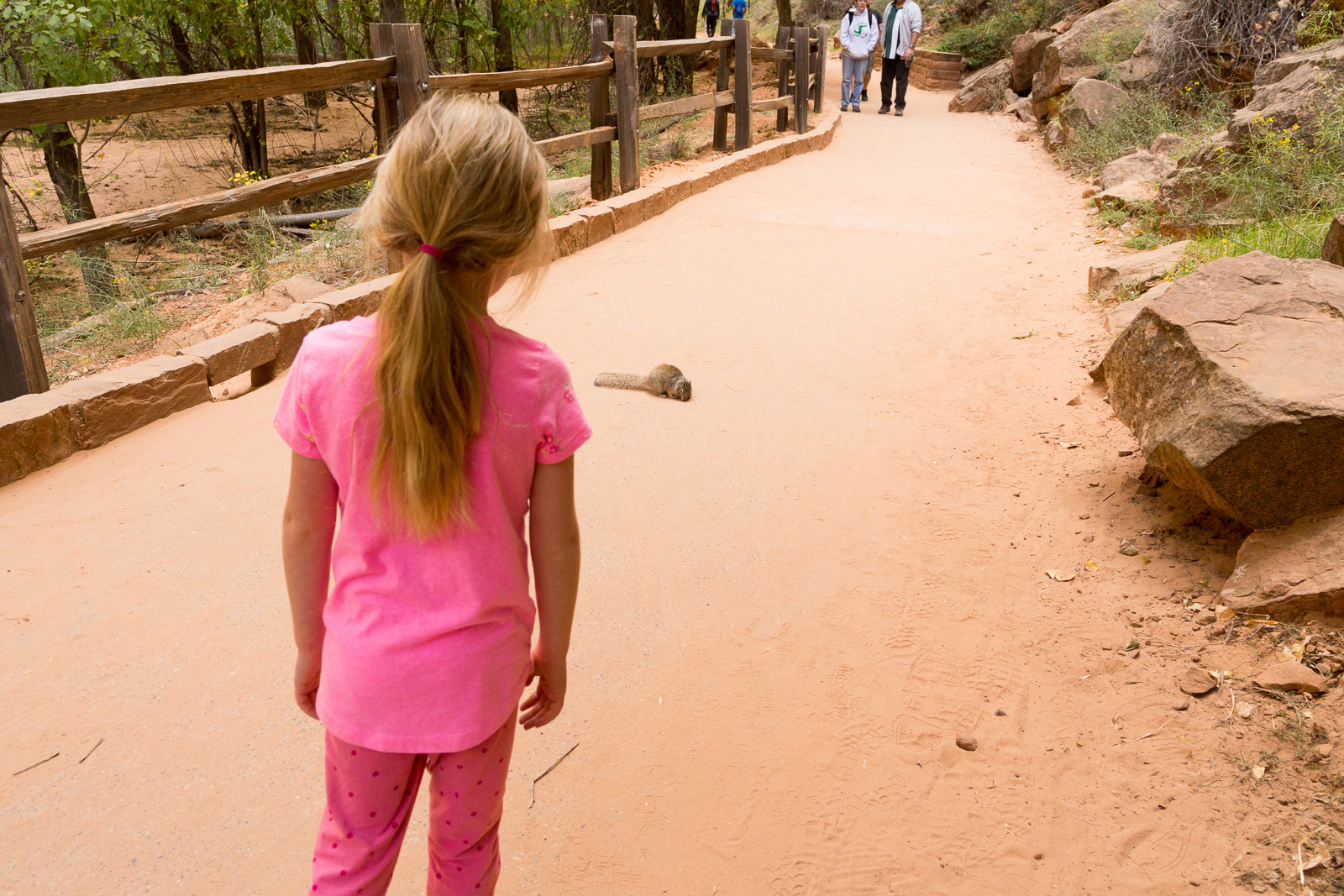 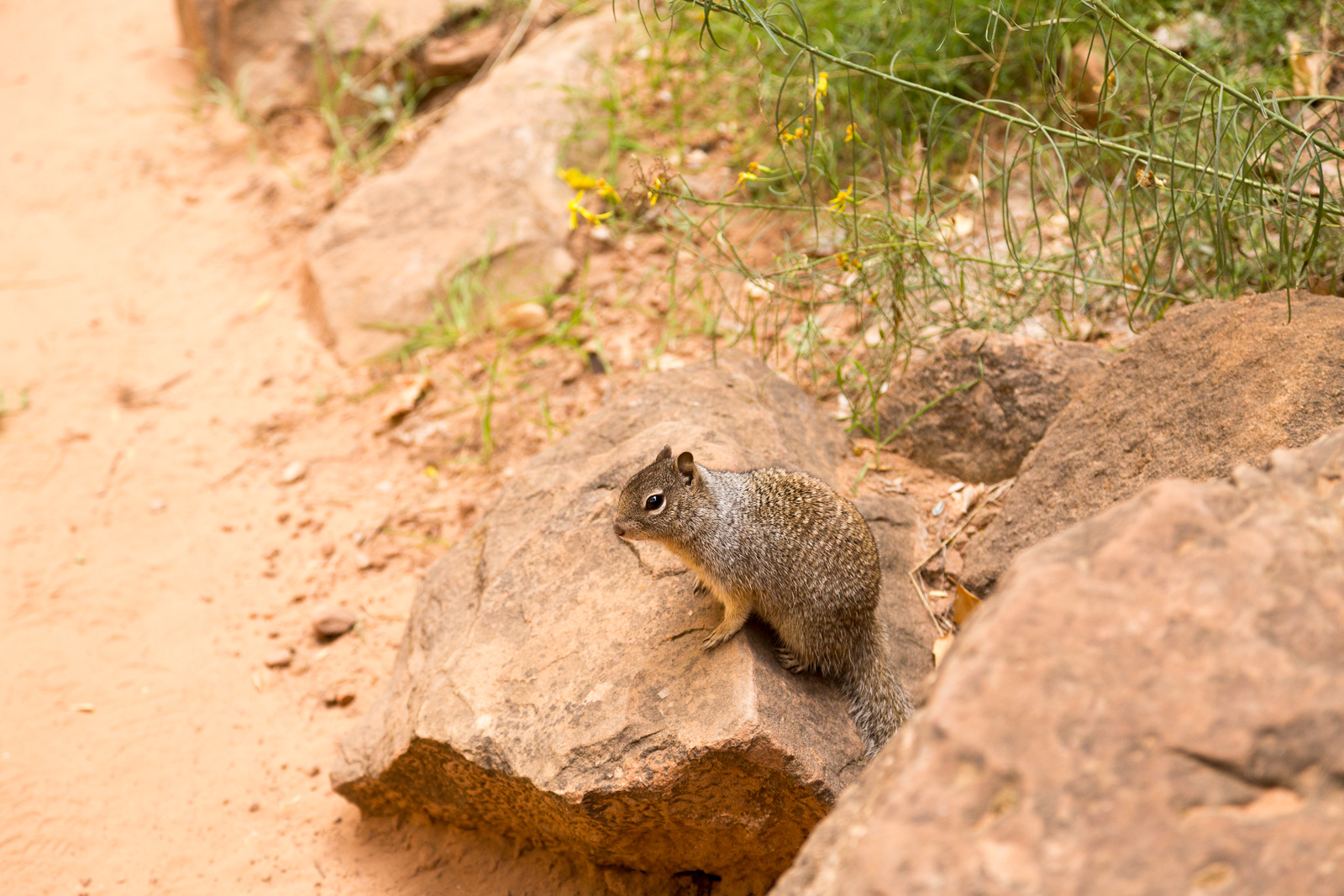 Leta was super worried when she read the warnings at the visitor’s center about cliffs, flash floods and dangerous hikes. I assured her that the first hike we would do would be an easy walk, without cliffs. The hike we did is called the Temple of Sinawava. It is the gateway to the Narrows, a river hike that requires a backcountry permit. We did not do the Narrows. We just did the river walk, which is an easy walk on a paved trail. 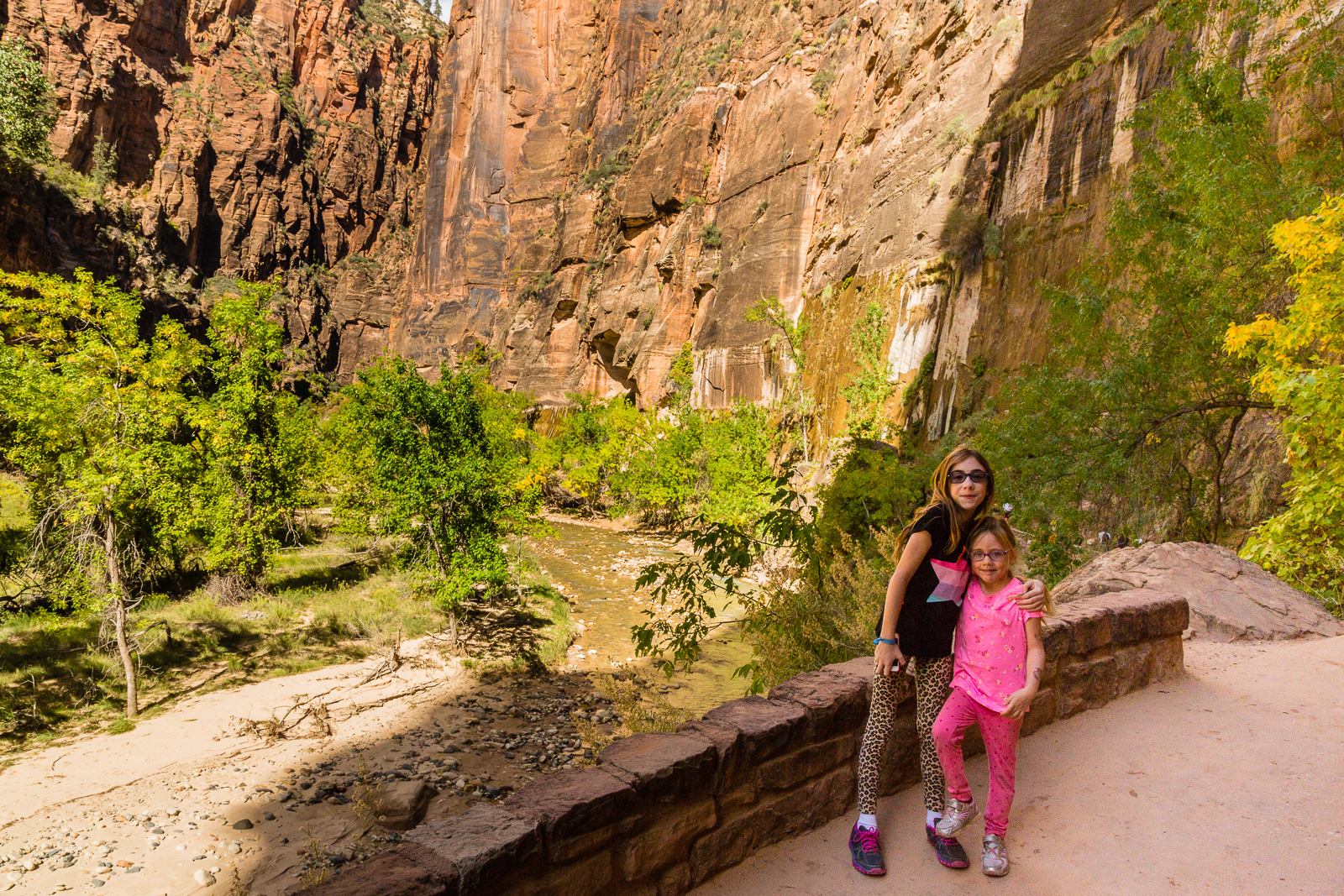 At the end of the trail, you can walk down to whatever beach there might be of the river. The girls begged to take off their shoes and play in the sand. I pretended to consider this and lean toward keeping the shoes on. When I told them they could take them off they were ecstatic. 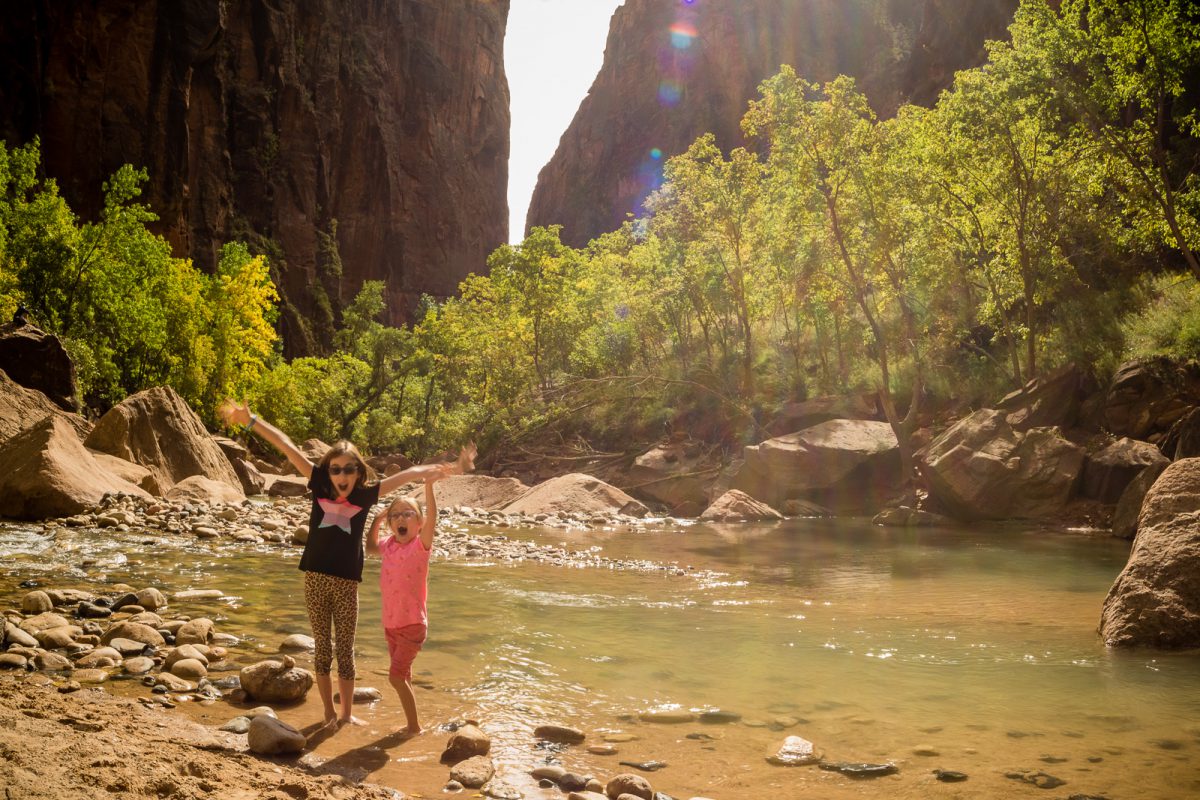 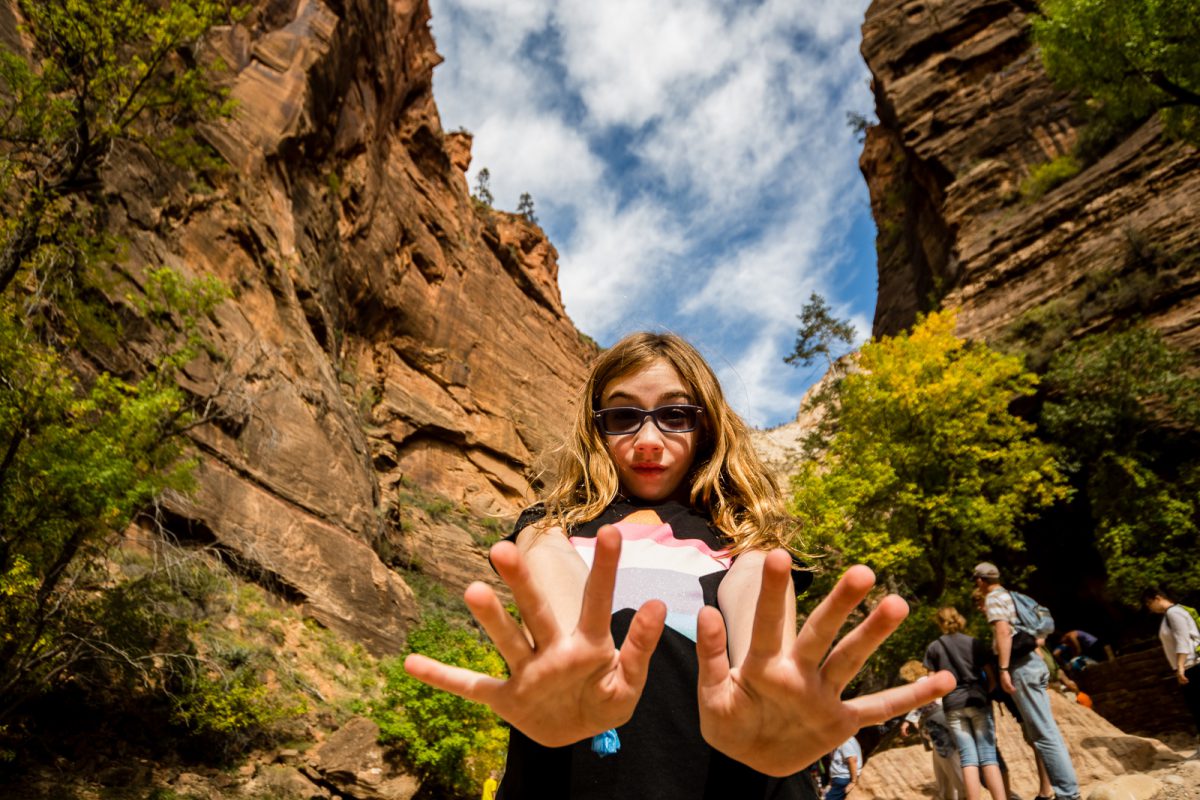 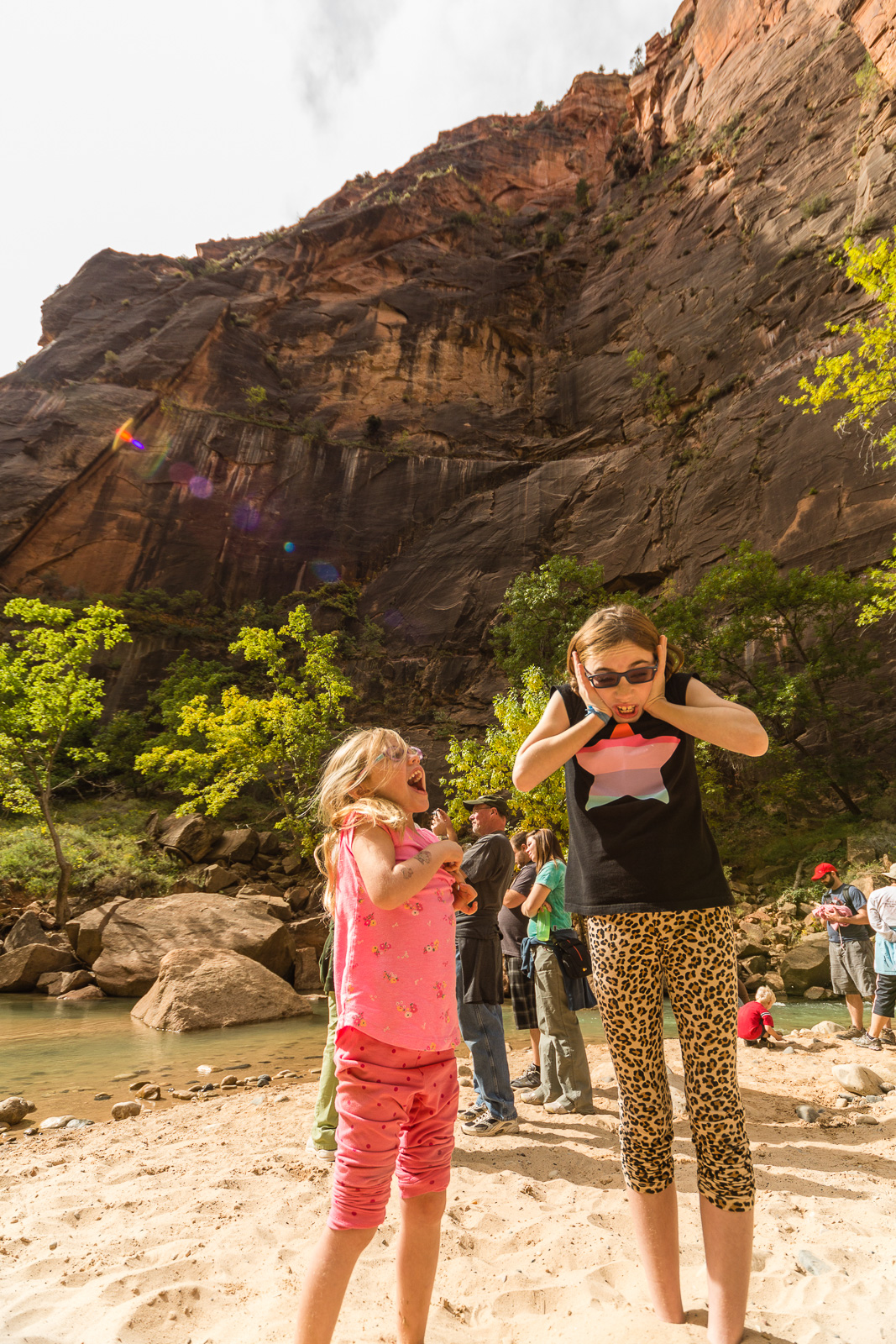 The weather was perfect and we spent an hour playing. I even got to take a few photos. 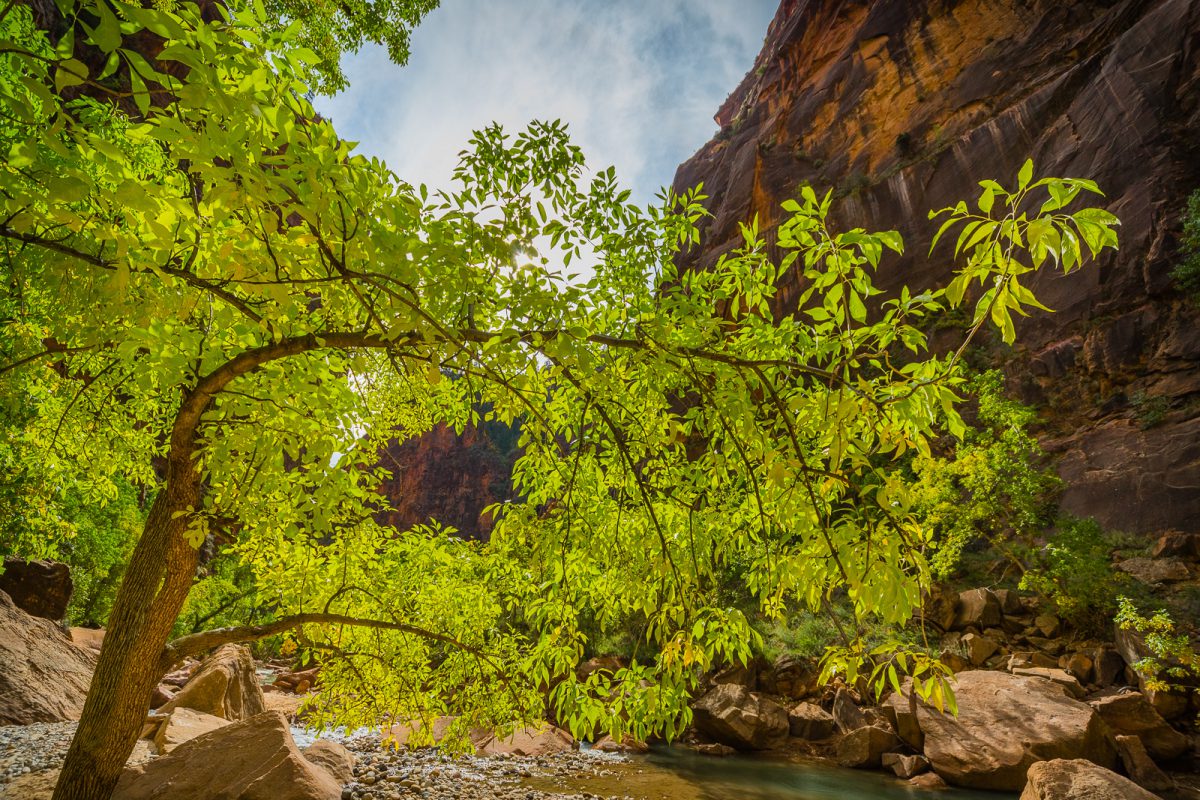 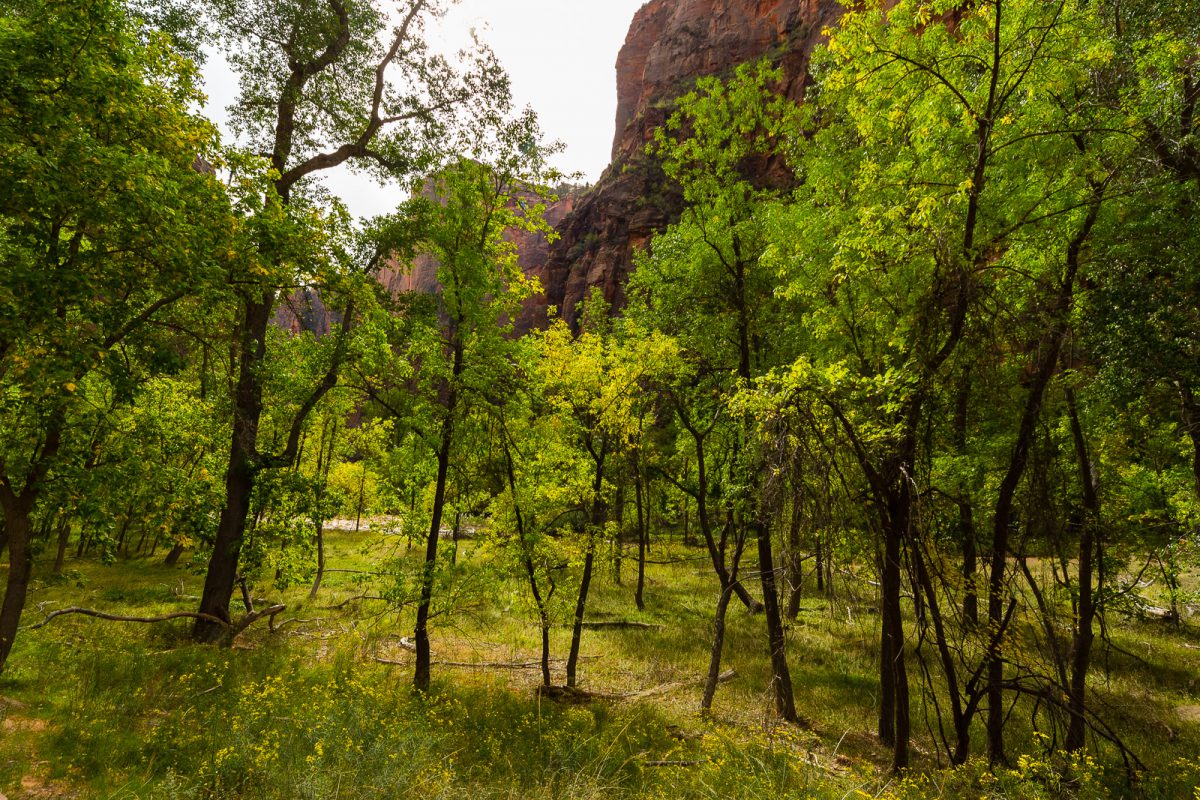 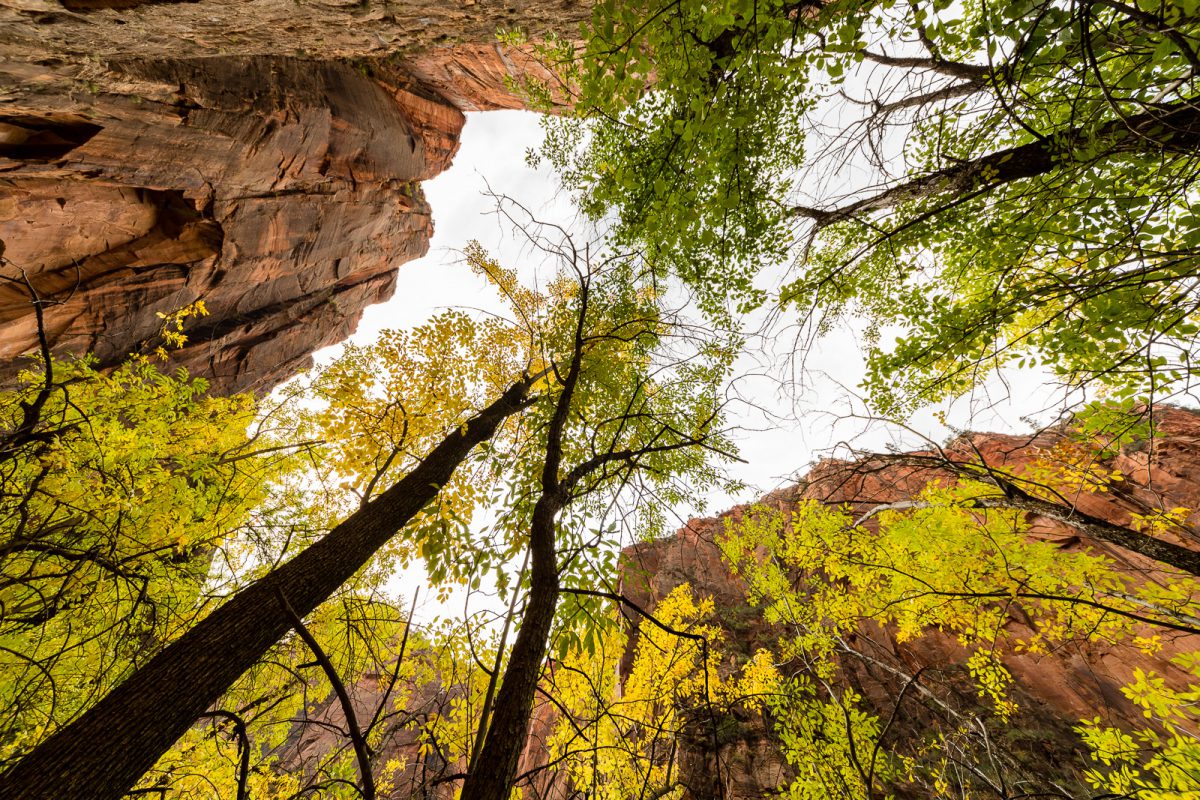 Once the girls realized how easy the hike was and that they weren’t going to die, they took off down the trail and I had to catch up and remind them about venturing too far ahead. Leta wasn’t as big a worry as Marlo. If Marlo were a few years older, I’d be a lot less concerned. We live in a different world from when I was younger, running ahead of my parents on this same trail, climbing rocks that I shouldn’t and most definitely using my outside voice. Of the letting go things, I had to let go of that world as well. 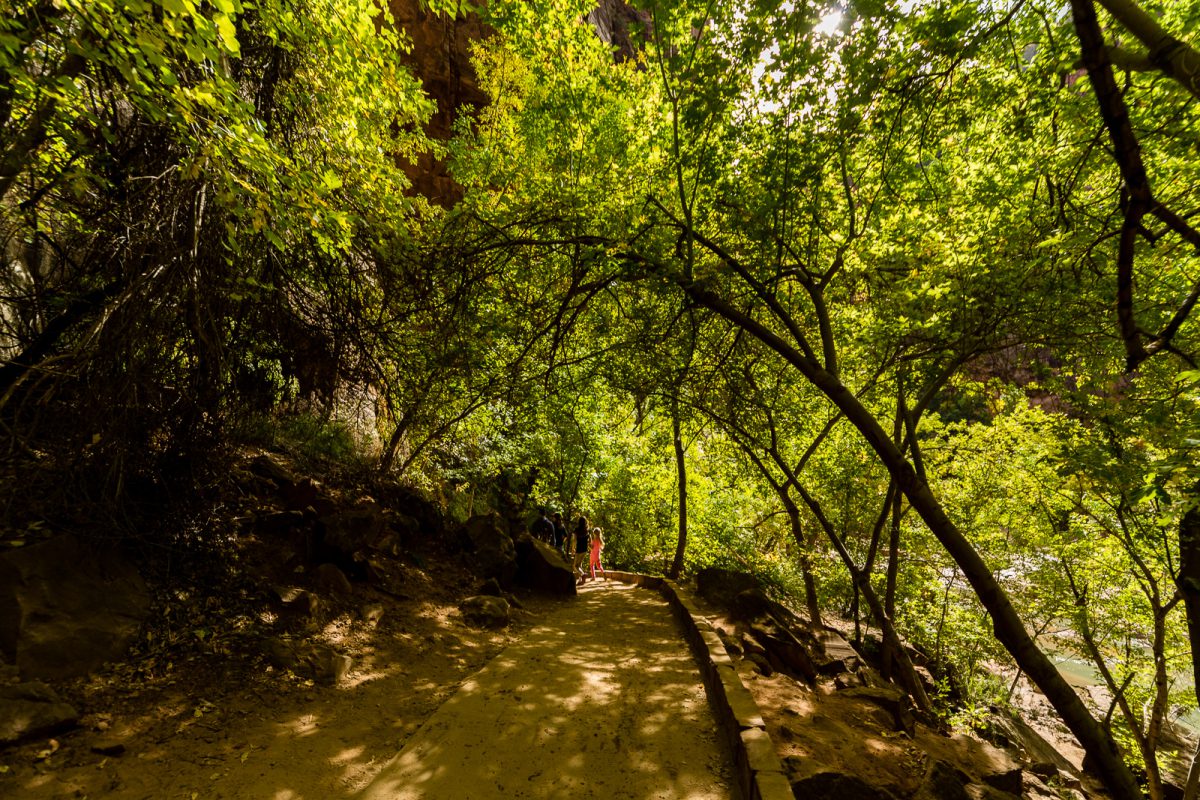 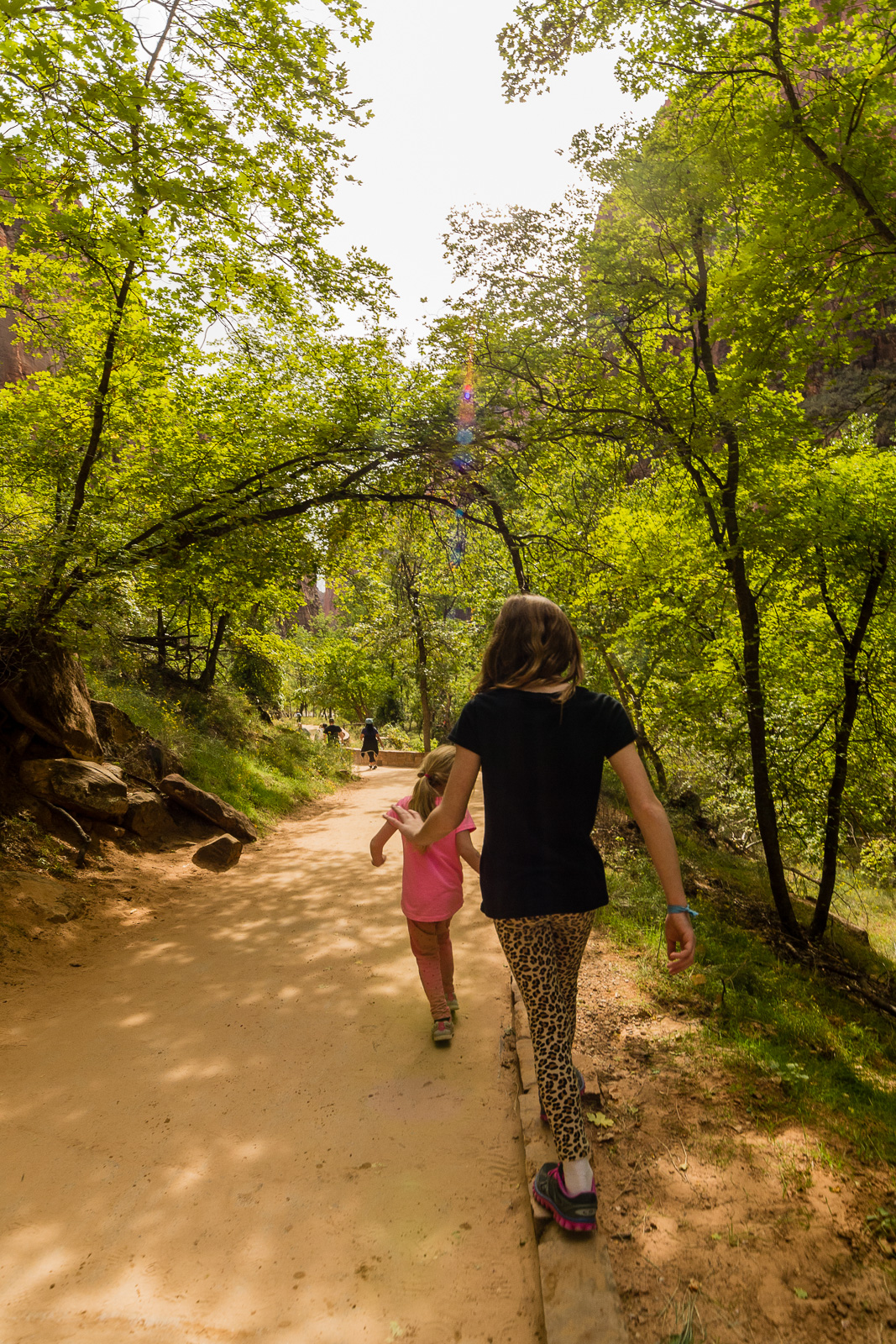 After we returned to our room, the girls were very upset that we didn’t bring our swimsuits. With lows in the 40s at night, I wasn’t sure the pool would even be open. It was and I paid a price every time we walked by the pool, my girls clinging to the fence surrounding the pool, staring wistfully at the handful of brave guests swimming and wishing they could get in. I won’t make that mistake again. Swimsuits next time. Dad.

We all slept amazingly well. As in completely zonked in a matter of minutes and no wake ups.

I’ll write about our second day in another post. Hopefully soon. 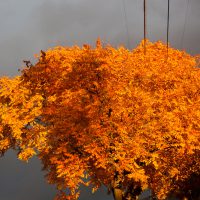 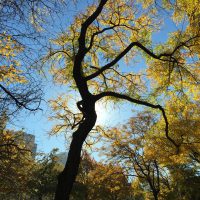 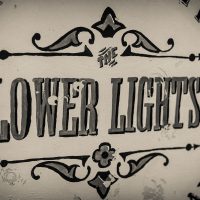 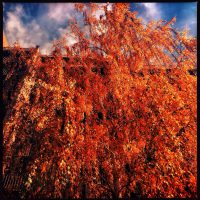 Soaking in the fall colors