Earlier this year I joined Kickstarter (finally) for this project: NeoLucida – A Portable Camera Lucida for the 21st Century that was linked in this Boing Boing post. The project founders, Golan Levin and Pablo Garcia, are not trying to become manufacturers or a startup company. They are trying to hack education culture. This becomes clear around 11:00 in the above video when they discuss the idea of product as provocation in order to re-imagine commerce and education. Fascinating for me because the project touches all the things I’m into: technology, art, art archeology, art history, debunking myths and commerce through an online outlet.

The product demo starts around 17:30. After watching the live demo, I can’t wait to play. What I’m really excited about is letting my girls use it to draw. They both love to do art projects, but I often hear an expression I know so well about lack of ability and then the abandonment of whatever project they are working on. I used to feel the same way. School projects are completed, but the supposedly more fun home projects just stop when a certain point is hit. I don’t think the NeoLucida will be a cure-all, but it might be something they love and something we can do together. I don’t think Marlo will sit still for a portrait, so that may require bribery.

Drawing is one of those things I have always wished I’d have worked harder to get better. Around the time in my life that I’d have had the solid blocks of time, I changed majors and realized that computers were taking over design studios and agencies. I think back to March, 1984, when I walked into a computer shop near my home town and played with the first Macintosh. The ability of the machine to do precise lines and forms, including type, was almost too much to bear. My head was swimming with possibilities in 1984 even though I wouldn’t own a Mac until 5 years later. I don’t blame computers. I just wish I’d spent more time back then with a sketchbook instead of a mouse.

I loved doing ink drawings, but I was always too messy with ink. When I discovered Ralph Steadman’s Scanlan’s and Rolling Stone work, I gained some hope, but my design courses required a finer hand than I had developed and the Mac’s siren song was too powerful. Besides, there was already a Ralph Steadman and he could actually draw.

I’m hopeful the NeoLucida will be something to encourage more natural expression using purely analog instruments, away from a digital machine. And I hope it will keep me and the girls away from Candy Crush, the most evil game ever invented.

Postscript: The complete Kickstarter project video is worth watching: 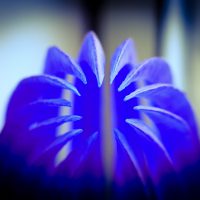 This is a Hard Drive