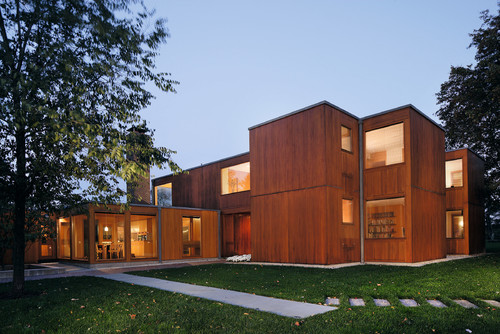 A couple of years ago, I watched a moving documentary on Netflix, My Architect – A son’s journey directed by Louis Kahn’s son, Nathaniel. You can see it with subtitles on Vimeo. The documentary shows some of Kahn’s major work and the story is unbelievable. At university, I had a semester or two of modern architecture and Kahn was referenced as an underrated influencer. I hadn’t seen any of his houses until I caught this post on Houzz. Yale University Press recently published a book, The Houses of Louis Kahn. The book is also available on Amazon (Amazon link is an affiliate link).

“Unlike many architects who start with houses and then (hopefully) move on to larger projects (offices, museums etc.), Kahn never abandoned the design of residences, even as his monumental buildings overshadowed them. Granted, two of Kahn’s houses — the Margaret Esherick House (1959–62) and Norman and the Doris Fisher House (1960–67) — are considered masterpieces of 20th-century residential architecture.”

« The Blurbomat OMG I Need to Shop For a Geek/Nerd Right Now Geek Gift Ideas Guide 2013
The Lower Lights, December 2013 »

Tea Party Rep: Bank Should Have Known I Wouldnt Be Able To Repay $2.2 Million Loan