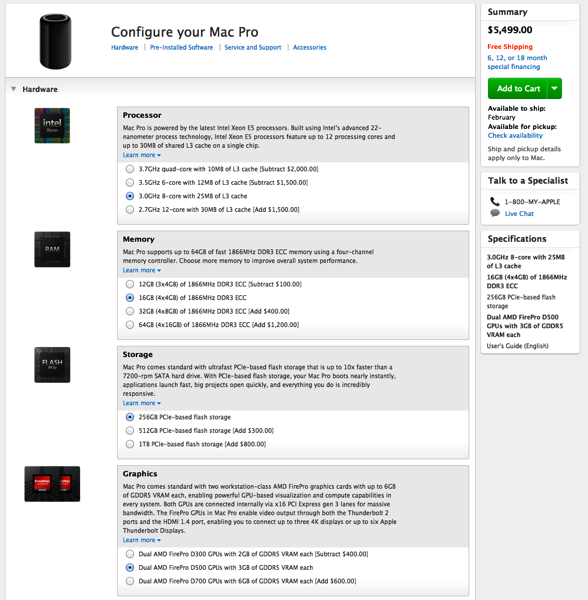 I’m guessing most of you could care less about this level of geekery, but I liken this to buying a car or upgrading an expensive toolkit for work. I’m doing to live with my choice for awhile, I want it to be a good choice.

A mother of a Mac Pro review at AnandTech, with a hat tip to Marco.org

Accidental Tech Podcast episode 45: “Give Up On The Retina Dream”

A critical look at the new Mac Pro | Ars Technica

Back in 2003, my day job bought me a dual G4 1.4GHz Power Mac and moving from my iMac to that machine was an eye opener. The same happened in 2008 when I moved from a 2006 PowerBook to my 2008 Mac Pro. Triple extra eye opener. I’ll never forget a 2009 screensharing session from my Mac system while testing ad code in Internet Explorer 7 from a VMWare Fusion virtual PC. The guys on the other end were freaking out when I asked them which version of Windows and which version of IE they wanted (I had built several virtual instances for each browser; ah, the things we used to do for IE.) and how fast the machine ran with the virtual machine while running my main OS at the same time. Heady days.

Apple introduced a new Mac Pro back in June of 2013 and it went on sale in December, 2013. The early reports and reviews are starting to come in. I’m torn. The Mac Pro is a beast, but it’s a very very expensive beast. Given that a big chunk of my workflow involves Adobe Lightroom, I’m convinced that the Mac Pro is probably the best machine for me. The problem is that the model I want, configured how I want it comes out to $5499 on the Apple Store:

1993 called. It wants it’s Quadra 900 back. Sure, if I was a video production house, throwing down that much for a machine wouldn’t be a thing. But I’m not a production house. I do some video, but nothing that would justify spending at least $6k or more (taxes, accessories, etc.) for a computer. I was listening to the Macworld Podcast, specifically episode 385 with Ted Landau and Chris Breen. They discussed a recent article that Ted wrote for Macworld: “The new Mac Pro: Not for the faint of wallet. This subject is something that many Mac professionals and prosumers are facing: which machine do I buy now that I know the pricing for the new Mac Pro v. a higher end iMac (the 27″ model). I’ve debated internally for a couple of years if I could move back to an iMac. I’ve always landed in the No camp.

One of the things that Mr. Landau brings up is that the retail cost of the Mac Pro is just the beginning of costs. He’ll have to buy external storage that connect to the Thunderbolt ports, a new monitor (or at least adapters for his current setup, something I face as well) and external media drives, as he still uses the DVD drive in his existing 2009 Mac Pro.

In my case, my early 2008 Mac Pro was purchased at a cost of about $2900 for it in February of 2008. I already had a large monitor and a secondary monitor, so that was not an expense I had to worry about. I added a Drobo and filled up the four drive bays with scratch and backup disks. I also upgraded to an ATI 5870 graphics card back in 2010 or 2011. My 6 year old (!!!) Mac Pro has been an astoundingly good investment. The work that I did on it for my businesses more than paid for the cost of the machine. Not even a blink of a consideration. This Mac Pro was one of the best business decisions I ever made.

So now that the reviews and reports and punditry are rolling in on the 2013 Mac Pro, I’m starting to do real-life analysis on whether I limp along with my current setup or make another long-term hardware investment. Geekbench 3 score on my 2008 Mac Pro (64 bit): 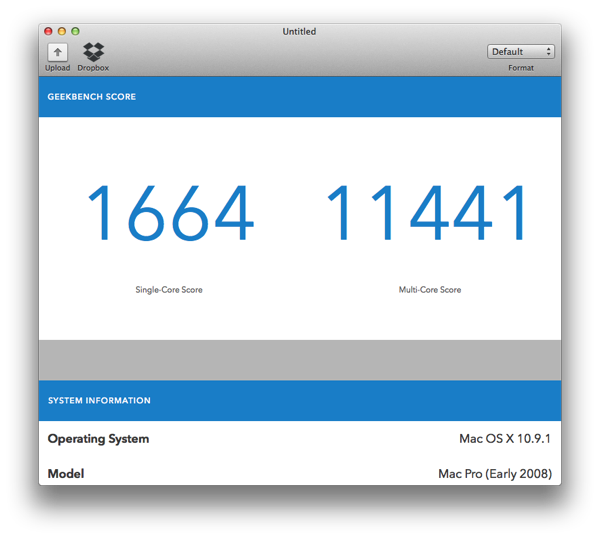 This explains why I’m noticing performance hits in Lightroom, Final Cut Pro X, Motion and sometimes Logic X. My mid-2010 15″ MacBook Pro is showing its age as well. I don’t use that machine as much, although for client meetings and pitches, conferences, presentations, remote photo editing and remote development work it’s been my primary machine. I’ve also done some music work with the MacBook Pro and it hasn’t let me down. I haven’t thrown really big stuff at this laptop, as I have had the big machine at home for the more intense work. I’m leaning pretty hard towards a Retina MacBook Pro. 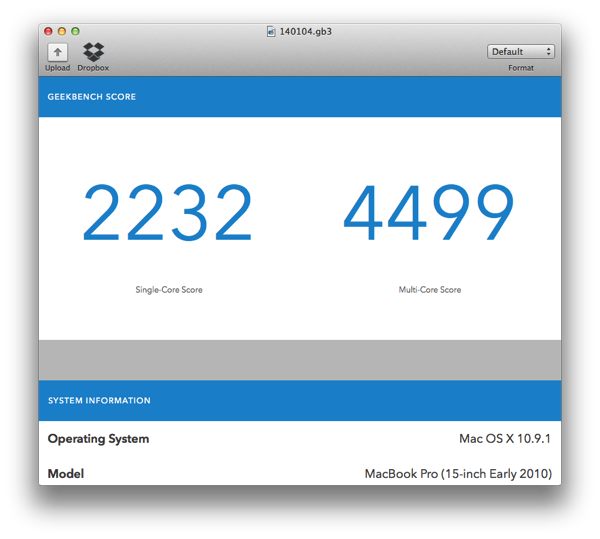 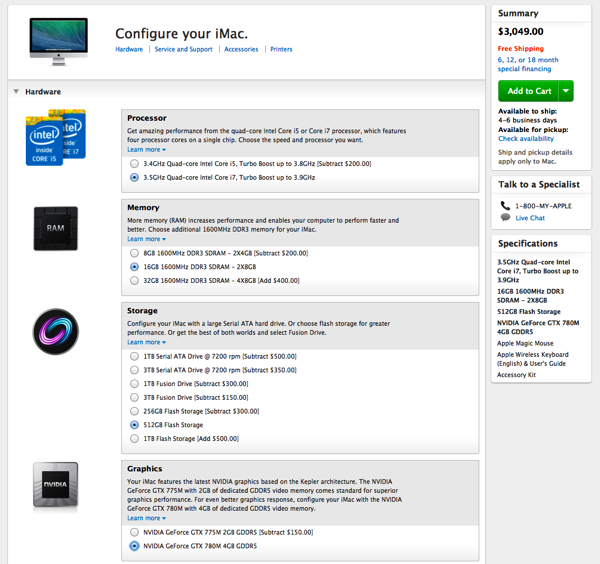 and a MacBook Pro configured how I’d want it: 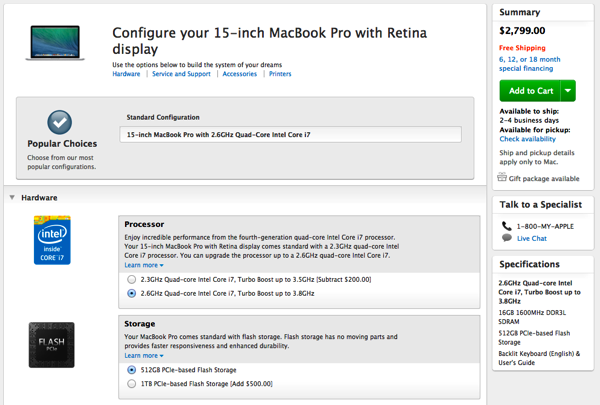 I’ve chosen not to go the Fusion Drive route and stick with purely solid state drives.

As much as I don’t want to consider an iMac or MacBook Pro based on my past experience, it’s looking like one of those is the right machine for me, right now. I will have to get non-stock versions, and I will still pay a premium, but the bumps in price for those aren’t as severe as the bumps for the Mac Pro.

I had always tended toward the lower end of Apple hardware until that revelatory dual G4 in 2003. It wasn’t the highest end, but it was upper-mid end. And that’s what I did when I bought both my 2008 Mac Pro and my 2010 MacBook Pro. I bought upper mid machines with some build to order specs that have paid off very well. For example, on the 2010 MacBook Pro, I upgraded to a solid state drive instead of a traditional drive, bumped the processor up and figured that i could always expand the RAM should I need. If I go the laptop route, I’d configure it at the upper mid level and those are the prices I’m using to do my cost comparisons. I’ll have to get a bunch of adapters to keep my current Drobo and monitors, but I’d have to do that regardless of which new machine I get.

I’m not quite ready to pull the trigger, but I’m close. Despite the low scores, I can’t believe that both of my main machines are still working this well (albeit slowly), this long after purchase. In my computing life, nothing has touched both of these machines in terms of speed, usefulness and durability. I’m hoping that all this nerdery will help me make a decision that pays off as well. I’ll likely have this machine for 2-3 years at a minimum.