Not Pro at All

We’re going to Amsterdam. There’s so much to do. So much research. So little time.

I’ve got about seven unfinished posts waiting for the finishing touches. The biggest deal isn’t the time management problem or the amount of projects underway. It’s that watching Leta is way more work now that she’s walking and talking. She gets bored so easily. It’s still too early for the CSS and PHP lessons, but I’m counting the days. For now, she’s scrunched up close to me, going retro with an old Boohbah episode.

She’s a different kid with her legs churning. And she’ll be two shortly. So there’s the attitude. Couple that with a crushing separation anxiety that won’t allow Heather to be no more than two feet away and my hands are tied; my ass kicked by a nearly two year old toddler.

One of the issues we’re having working from home is the distractionary nature of said toddler. I wouldn’t trade this time for anything in the world, but it’s so difficult to get things done now. I’m contemplating building a studio out back just to have an escape. I know this time will pass far too quickly, but it’s called the fog of war for a reason.

To all the people I owe email, revisions and project updates, I apologize. Hopefully I’ll get to them before any deadlines. 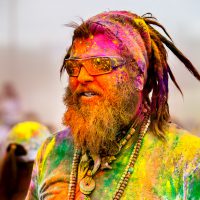