Due to popular demand, the full photo (Daily Photo, Daily Chuck and Daily Style) should show up in the feed. You should see the change next time Heather posts in one of those sections. Re-subscribe if you simply must have the large images RIGHT NOW.

So far, I’ve been really impressed with how efficient Drupal has been, despite hearing otherwise on the street. We’ve had some big traffic surges with the redesign and the server has handled things well, including the days where comments have been opened. Having the freedom to open comments without fearing a server crash was a key motivator in migrating to Drupal.

There may be some more tweaks to the site this week, but it’s looking pretty good.

We’ve had a wicked big storm (12″ of snow in the driveway, a bit less under the tree out front) which was needed, but full of heavy, wet snow. As per usual, we lost our internet as the temperature dropped and everything froze. Hopefully, we won’t be sidelined much this winter in regards to access. I’m wondering if a DSL backup upgrade is in our future. 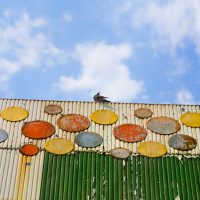