We have successfully avoided touching the large stack of boxes in our garage that held the CD collection for all the months we’ve lived here. Imagine two people, both who spent time at a music magazine and have a problem with music. I still think our collection is conservative compared to a few of our friends, especially one who is still actively DJing and purchased a file system that can hold 3,000 CDs. It’s not that bad here, but still, we’ve dreaded opening those boxes. I’m estimating around 750 CDs.

The main problem is that we don’t listen to CDs for our music anymore. It’s iPods in speakers and computers streaming using iTunes. It’s all about researching and buying online. iTunes and eMusic have been the main music stores for us for the past three or four years. We still get music sent to us on CD and we give it a listen, but it’s faster to be able to hit a website and download a sample track or two or seven than it is to deal with a CD. If we like a CD we get sent, it gets ripped and the CD goes into random unstorage where we fight it for months. Back when eMusic was unlimited downloads a month, I grabbed about 35 albums and was instantly overloaded with the weight of trying to listen to all that music. We’ve calmed it a little bit, but the music collection is only growing and having our old stuff to play for Leta is becoming more important. Like Stevie Wonder and Earth, Wind and Fire. The kid needs to know the value of a good horn section. From there, we’ll talk about John Coltrane, Miles Davis and Bill Evans. Which will open up the mention of improvisation and then we’ll go back a bit further if she’s interested. I still remember my dad playing Erroll Garner’s Concert by the Sea late at night (the piano solo on I’ll Remember April is off the hook) and talking about how jazz works, even though my dad didn’t play. I want Leta to have memories like Saturday mornings with Sly and the Family Stone, the E Street Band and bad parental dancing.

Aside from my general procrastination, I’ve been waiting for the operating system and ripping software to catch up so that I can be productive on my ripping machine while doing it all in the background. iTunes seems to have gotten there and I’m able to rip and work. I also wanted a machine strong enough to rip at a high enough rate that I won’t have to do it again. I’m ripping MP3s at 320 kbps, VBR (Medium setting in iTunes). MP3s seem to be the universally accepted file type that will play on the largest range of devices and computers. I’m doing this on an external drive that is portable and has multiple ways to connect to computers. I’ll be buying a backup drive or two to do regular backups so that our music collection has redundancy and if we suffer a crash, will be recoverable.

After one day of intermittent, not even full-time ripping, I’m in 31 albums and about 4 gigabytes. And the range of music we have is still mind blowing after all these years. I remember in late 2001, sitting down to merge the two collections and alphabetize (it’s the only way to find things after you double your CD collection). It was definitely one of those moments where you realize you are in a committed relationship. We still discuss pre-merge and post-merge as a major milestone in the relationship.

We finally opened the boxes and I started the process. It’s been kind of fun to hear random tracks from the past. I’m kind of laughing at a few of the discs… Chaka Khan’s Epiphany: The Best of Chaka Khan and Heather’s mid-90s Britpoppers bis, her cherished copy of Cameo’s Word Up and my Blue Nile collection. If you see a whole bunch of older music in my Last.fm feed, this project is why.

If any of you have done this already and have tips, please share them in the comments. I’d love to hear tips, strategies, techniques and post-mortem (post-morta? Is there a plural of post-mortem?). 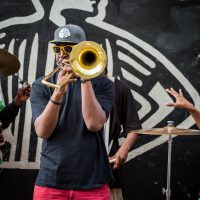