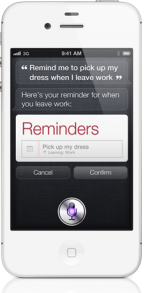 There is a news story making the rounds today blaming Siri for the increase in data usage in the iPhone 4S. Since iPhone 4 users don’t consume as much data, Siri is getting the blame. A bunch of news outlets are carrying the story, but I’m not buying that Siri is the cause. I think there is either a hardware problem or a major bug in iOS. On my phone, I’ve seen a marked increase in data usage since upgrading to the 4S. As in triple the amount. I’ve never even come close to the data cap and the past couple of months I’ve been teetering on the edge. It’s not like the extra $10/gig charge that AT&T levies is a huge deal, but the amount of data being pushed is staggeringly higher than any previous phone, including months with heavy travel and 3G usage.

Here is a list of outlets running with blaming Siri for the increase in data usage:

Reuters – New iPhone doubles data consumption: study | Reuters (This story takes a slightly more nuanced air; “The iPhone 4S is perceived by some as a data hog because of Siri”)

I don’t believe that Siri is what is causing the data flow. It’s iCloud. When I’m logged into my account on the phone, that is when I’ve seen the increase in data flow over 3G. I think this is the bug that is causing the increase in data and the iOS software updates have not fixed this bug. That is my theory, based on my highly unscientific testing.

This story from ZDNet agrees with me in one regard, that Siri is not to blame: iPhone 4S ‘doubles’ data usage … but is Siri really to blame?.

For starters, Siri’s not really that heavy as far as data goes. As testing has shown (and this is backed up by data I’ve collected from Siri users), doing ten or so queries a day over 30-day period (while out of WiFi coverage, obviously) will consume some 20MB.

What have you observed with your iPhone 4S? Have you had to pay more for any additional data?

Wrong on Every Level