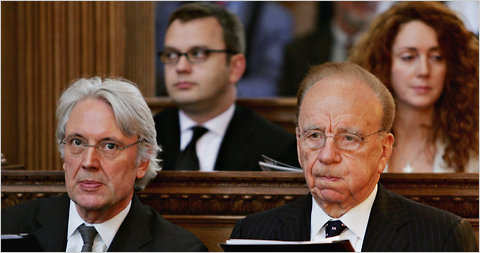 This just keeps getting crazier. First up is the story of John Yates, London Metropolitan police assistant commissioner, who resigned today:

There is speculation that British Prime Minister David Cameron is going to pay a price for his judgment with all of these shady characters:

How Paul Stephenson and PM fell out over hacking scandal

In the states, things are just starting to get interesting.

This New York Times Mediadecoder blog post (not sure if this post is behind the pay wall, YMMV) has Les Hinton’s resignation letter to Rupert Murdoch and a letter to the staff of The Wall Street Journal.

David Carr in the New York Times posted a fantastic piece detailing troubles for one of News Corp.’s marketing companies, News America, outside of the phone hacking scandal:

In 2009, a federal case in New Jersey brought by a company called Floorgraphics went to trial, accusing News America of, wait for it, hacking its way into Floorgraphics’s password protected computer system.

The complaint summed up the ethos of News America nicely, saying it had “illegally accessed plaintiff’s computer system and obtained proprietary information” and “disseminated false, misleading and malicious information about the plaintiff.”

The complaint stated that the breach was traced to an I.P. address registered to News America and that after the break-in, Floorgraphics lost contracts from Safeway, Winn-Dixie and Piggly Wiggly.

Much of the lawsuit was based on the testimony of Robert Emmel, a former News America executive who had become a whistle-blower. After a few days of testimony, the News Corporation had heard enough. It settled with Floorgraphics for $29.5 million and then, days later, bought it, even though it reportedly had sales of less than $1 million.

But the problems continued, and keeping a lid on News America turned out to be a busy and expensive exercise. At the beginning of this year, it paid out $125 million to Insignia Systems to settle allegations of anticompetitive behavior and violations of antitrust laws. And in the most costly payout, it spent half a billion dollars in 2010 on another settlement, just days before the case was scheduled to go to trial. The plaintiff, Valassis Communications, had already won a $300 million verdict in Michigan, but dropped the lawsuit in exchange for $500 million and an agreement to cooperate on certain ventures going forward.

Which makes the $1.5 million that Rupert Murdoch’s companies have paid out so far in the phone scandal seem like paltry corporate table leavings.

For more background and a handy visual timeline of Mr. Murdoch, The New York Times Magazine has a pretty good one here. The Guardian has a more textual timeline that details the phone hacking arrests beginning in April of 2011.

« Booooom!
The Old Man and the Building »