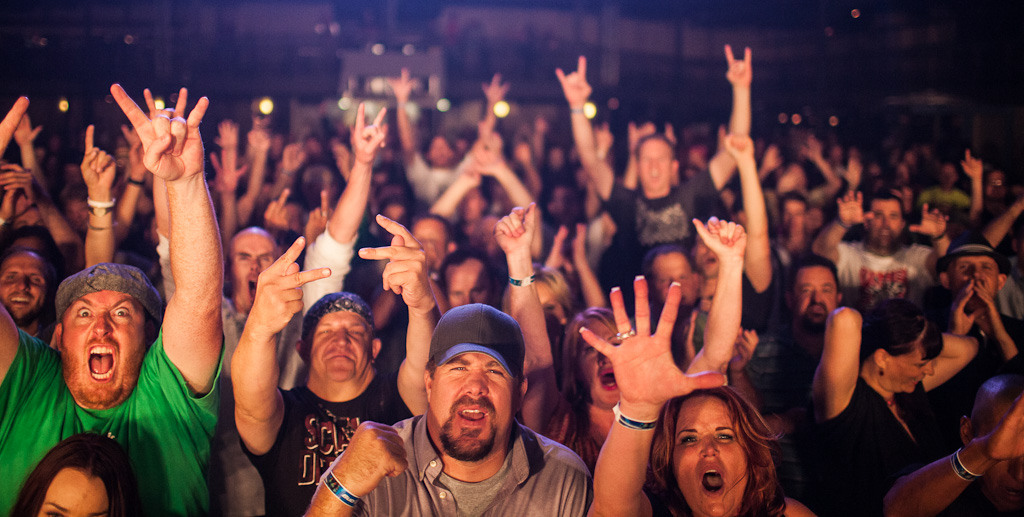 We finished the set and took a break prior to the encore. I realized that I hadn’t taken any shots of the band onstage or of the crowd. I ran back out with my camera and took about 10 shots with the 5D, trying to get enough shots of the crowd to stitch together a panoramic shot. About 3 of my images turned out. This is one of them.

The show was amazing. My playing: ok. Not bad really. But compared to the rest of the rhythm section? Weak sauce. Still a lot of fun and I paid a price for jumping around like a 20-something. To put this in context, Swim Herschel Swim haven’t played together as a band since 1995. We had our first band rehearsal last Thursday night without the horns. Atrocious. Full of flubs, wrong keys and forgotten sections of the songs even though I had played through the CD a dozen or so times prior to the rehearsal. My lead sheet work left a lot to be desired. It didn’t help that the practice space was a sweatbox with no AC on the hottest days (and nights) of the year. As I drove to dinner about 11 pm with a few bandmates, I seriously questioned what the hell we were doing. Definitely a what have I gotten myself into moment. I also missed Iron and Wine playing an outdoor show a few blocks away. Bummer all around. That was an awful night; knowing that I did not come as prepared as I should have, despite feeling pretty solid. Rude awakenings always are painful.

For years, I felt like Swim Herschel Swim had our day and that was that. There would be little point in getting together and playing a show, as on the national or any other level, nobody knew/knows who the hell we were/are. So why now? The impetus behind Saturday’s show was a Facebook question last summer from the band Stretch Armstrong’s lead singer (Scott Van Wagenen; heart of gold, saint). He asked each band member in a group thread if we’d be up for playing a show. At that time, Stretch had gotten together and played together a few times and several of us were following along. I think I was the holdout. When I said yes, several Herschel band members messaged me to make sure I was not on drugs. I was on post-gall bladder removal drugs, but nothing mind altering. At any rate, I decided what the hell? I thought I was going to die any day as it was, so may as well have a go with the best band I ever performed with. I figured it would be a small venue show, maybe a hundred or so people, mostly family and our kids who never heard us play. As the scheduled show last fall got bumped, we ended up booked into a huge venue (3,500+) and the pressure was on. About three weeks prior, our sax guy had to bail (I almost threw in the towel then as he is a monster player) and we were able to get other horn players, but they would have to learn the songs fresh. Turns out both are super professional and were the least of my worries. I was the most of my worries. And rightly so.

Last summer, I bought a keyboard that doesn’t make sounds on its own. It’s just a controller. I had purchased Logic Express using my original iPhone rebate money (remember the $200 store credit back in 2007?) and then upgraded to Logic Pro in 2010. The controller works very well in a studio environment. I figured I could use an app called MainStage to perform with, which is what I ended up doing for most of the sounds for this show. I used my laptop as the brain and I was impressed with how well it performed under the heat of the stage. I will say that organ glissandos resulted in more than a few stuck notes. That was disconcerting to hear a painful high note and realize I was to blame. I need to play with the setup more to lock it in, but for what I needed, I got great sounds. I also disentombed my Cheesemaster 2000, a Roland D-50, the keyboard I bought after temping at the rocket factory back in 1988. She worked, but was too unreliable, so I only used her for certain songs. If I were gigging regularly, I’d figure out how to make the controller work a little better with my laptop and program the complete set, just using one keyboard. Several of the band had requested I bust out the Cheesemaster and I had to admit that seeing the familiar buttons and hearing the sounds I custom built for Herschel brought back some great memories. However, the possibilities with the laptop are endless.

On Friday, things started to come together. I missed the first rehearsal on Friday morning so that I could take Leta to the eye doctor (she’s fine). But Friday afternoon I was there for a full set run through with the horns. Not bad. We started to gel. The horns left and the core of the band played through the set again, working on the technical sections and polishing them the best we could. We played until 11 or so. Saturday morning, we played through the set one last time and I felt much better about how we sounded. I still had a wicked case of nerves around my rig, my attention being all over the map around all the live show stuff that I had completely forgotten about and my physical ability to hit right notes given all of the above.

We were booked as the headliner, but the real stars of the show were Stretch Armstrong. Very strong set, great crowd response. They played four more years after Herschel broke up and they put out more music, toured and got more radio play than we ever did. I was always happy that they had their success. Something good needed to come out of the amazing pool of talent in Provo. I hadn’t heard them since 1995 and they put on a hell of a show. Massive crowd support and really great to watch. I’ve got some shots I’ll share over the next few days. It was an honor to be on the bill with them.

Once we took the stage, I think I did ok. Still. Some of those wrong notes will haunt my dreams. I had forgotten just how hard we rehearsed right up until the end of Swim Herschel Swim. We were doing three rehearsals a week and at the very end, we had played weekend shows in California as well as all over Utah. A few of us were working full time office jobs, making the Monday mornings even deadlier. That kind of dedication pays off and the contrast of those 1993 shows to now was a stark recall for me. One thing I remember all too well: I tend to worry that the stage show isn’t showy enough and the very danceable music makes me want to jump around. I tried to keep it in check, but the dancing got in the way of the notes. Which is exactly the opposite of where I was in 1993. I made a decision the fall of 1992 that the music was the show and people didn’t care if I jumped around or not. So I focused on the notes. It helped our sound and I sounded better than I ever had.

In 1995, we played a one-off show to pay off the guitarists parents who had paid for the Burn Swim Burn CD pressing. For that show I think we did a couple of full rehearsals and played fairly well. 17 years is a long time to not perform. I think Rod, the Herschel lead singer, was right when he told me behind Annie’s in San Francisco 1998-9 that we were “show people” and that I needed to be onstage. As much as I demurred then, I think he might have been right. I jumped around too much on Saturday night. Too much noise not to. I think two more rehearsals and I would have nailed it. Still. A blast. And long overdue. I hope we can get it together and play again. I’d love to write some new music.

If you were out there in the crowd to support any or all of the bands (Two and a Half White Guys, Insatiable (a Utah ska institution), Stretch Armstrong and Swim Herschel Swim), I can’t thank you enough for coming out. If you are in the above photo, I’d love to hear your story. 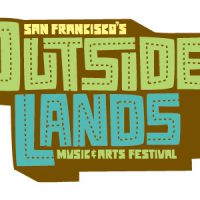