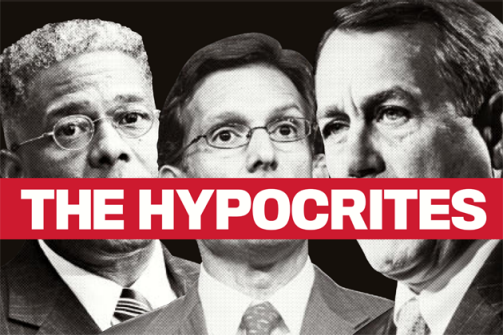 Tea Party Binge at the Trough

This article from Newsweek (on The Daily Beast’s site) talks about the latest round of GOP hypocrisy of decrying the “out of control” government spending out of one side of their mouths and out of the other side, taking as much largesse as they can:

Newsweek found about five dozen of the most fiscally conservative Republicans, from Tea Party freshmen like Allen West to anti-spending presidential candidates like Rick Perry and Ron Paul, trying to gobble up the very largesse they publicly disown, in the time-honored, budget-busting tradition of bringing home the bacon for local constituents.

Five dozen! Here’s a list of the hypocrites and their hypocrisy. The usual suspects are highly placed.

The Man Who Would be King

Link: Jonathan Ive and the Future of Apple – The New Yorker

Sturm, Drang and Me

War. What is it good for? Absolutely nothing. Unh.