For the past few years during the second week of January, I made the 4 block walk down 4th Street in San Francisco to wander through Macworld. Every year I was filled with tech lust for the pornographic technology shown by Apple. The vaginal iSub with those phallic sound sticks. The Cinema Display. It’s all beautifully manufactured and designed. The glow. The sheen. It’s begging to be touched, loved, licked and owned. Every year I walked away from the show figuring that somehow this year would be the one I’d buy something sexy in the computer area. It never worked out that way, of course. Now I’m in Los Angeles. There is no Macworld, no Steve Jobs waiting until the last second, no entire creative department caravan to the Moscone.

Over the years, I’ve become less of a Mac Zealot, and more of a Mac Afficionado. The things that used to be Mac only are no longer. Due to recent employment at EnormoCorp, I’ve been forced to eschew a Mac and work on a PC running Windows 2000. Several years ago, I might have refused the job based on this alone. However, I have bowed to the market/Information Technology pressure and figured this might be a good time to learn how to do design on a PC. After a few months, I’m sad to say that the PC has left me yearning for better typographic control, easier folder navigation (particularly across applications when opening or saving) and fewer Explorer.exe errors. I love the multi-tasking and the speed of the PC. Anything is faster than my current Mac. It’s 4.5 years old and is essentially the Millenium Falcon of computers; a Power Computing Mac clone cobbled together from bits and pieces and crammed with upgrade cards and secret hiding spots to avoid pesky Stormtroopers.

I figure it might be good to substitute the Macworld experience with a plain old Apple store visit. I wanted to see just how sexy that new iMac was… and see the bigger iBook. I invited my partner along. She’s an avowed PC Snob. I know. What’s to be snobby about? Superior market share? Does that make computing a more enjoyable or productive experience? Of course not. Still, she held her ground. Until walking into that store. We marvelled at the iMac, touched the iBook and I practically dry humped the Cinema Display (a bargain at $2,499!). We sat through the iPhoto demo. She got flushed and started hyperventilating. I pointed to the 6 month same as cash sign. We left the store immediately.

After 15 minutes of stunned silence, she informed me that while we were in a relationship, and that she knew that I had my own Mac needs, the 14″ iBook was exactly what she as an individual wanted for her next computer. And she wanted it soon. A week later, she signed the papers. She even went so far as to write about her experience as a convert.

After a few days with OS X.1, I’m a renewed Mac Zealot. Burning a CD this morning from the Finder just about gave me an orgasm. 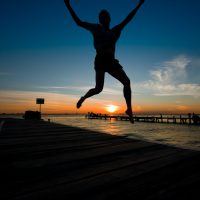 Hanging From the Sky

Another thing I helped do

Now She’s Up and Gone Done It