You might think of Google primarily as a search engine, with products built around that core. You might think of Facebook as a social network, with products built around that core. They are not direct competitors, except where Google+ overlaps with Facebook. However, the two companies are direct competitors in their most profitable arenas: fighting for your online identity. Not identity on a profile page or your history of likes. Your online identity, in this sense, is where you go on the internet and what you do. All of it. The buttons are just a way to verify a page visit and a click. But that information all feeds into who you are online. Google and Facebook compete on how much of your identity they can decode, serve ads to and sell. As data brokers, they are using you as the brokered commodity.

The age of Big Identity:

The data that identity providers gather is a crucial component of their business. It is a useful thing to know what your users are up to when they’re on your site. To know what their movements are on the rest of the web is a bigger prize yet. And as mobile phones and tablets render old tracking mechanisms, such as cookies, increasingly ineffectual, identity is becoming the single most important tool to follow web users across multiple devices. The mission of every large web advertising firm is to be able to paint a complete portrait of their users.

via How Facebook and Google are taking over your online identity – Quartz.

It’s a scary read. Unless you don’t care. Which most people don’t. That’s not a dig at people. It’s just a truism.

We grant a lot of power and information to private companies for the ease of communication and travel across the virtual world. This idea is not mine, nor is new:

2012: Forbes: If You’re Not Paying For It, You Become The Product

Powazek: I’m Not The Product, But I Play One On The Internet

2010: MetaFilter comment from blue_beetle in response to a Digg redesign

This week, Ello, a new social network that aims to be ad-free, became a thing. I don’t know. I’m not sure I care yet. One of the founders has already left and done so publicly. Smart people agree with the position that if you take VC money, your product is doomed. Ello has plans to offer paid services, but smart people with experience have weighed in, on Ello, about Ello.

Google and Facebook are superpowers. It’s going to be hard to displace them, especially with a janky user interface and a dream already at odds with itself and history. It’s hard to build and sustain without money. A lot of money. I hope it works out for Ello. Here’s the thing: when you go online, some aspect of you is a product even if you only are on Ello and none of the other social networks. 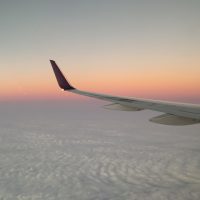