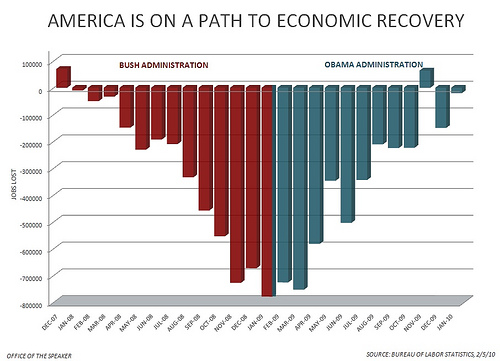 I have long criticized the GOP for being hypocritical in just about every PR move, every political stance and in allowing intellect to be devalued so that morons can run (and ruin) the party. Here’s some evidence supporting my claims

First, this scathing bit of documentation:

House Minority Leader John Boehner (R-OH) Said Stimulus Funds Would Create “Much Needed Jobs.” Minority Leader Boehner: “The stated intent of the so-called stimulus package was to create jobs, and certainly a $57 million slush-fund studying projects did nothing to achieve that goal. With Ohio’s unemployment rate the highest it’s been in 25 years, I’m pleased that federal officials stepped in to order Ohio to use all of its construction dollars for shovel-ready projects that will create much-needed jobs.” [Boehner Statement, 6/15/09]

-Congressman Boehner Regularly Blasts The Stimulus And Instructed His Caucus To Oppose It. [Huffington Post, 1/27/09]

The list is sooooooo long. Where is the “liberal media” on this story? Ha. Where is the mainstream media? Thumbs firmly up its own bloated, lazy ass. This alone is a scathing indictment of deep GOP bullshit.

New IRS statistics show that President Bush’s 2007 tax cuts disproportionately benefited the very wealthy. “The average income reported by the 400 highest-earning U.S. households grew to almost $345 million in 2007, up 31 percent from a year earlier.” Each of these top 400 households “paid an average tax rate of 16.6 percent, the lowest since the agency began tracking the data in 1992.”

And from the source Business Week story:

The top 400 earners received a total $138 billion in 2007, up from $105.3 billion a year earlier. On an inflation-adjusted basis, their average income grew almost fivefold since 1992, the data show.

Tea Partiers and conservatives can prattle on about taxes and big government, but the rich need to pay their fair share. PERIOD. P.S., Obama is still CUTTING TAXES.

Conservatives can’t argue reality, so they create a distracting narrative. Like the language here (arguing that being hypocritical ISN’T the story) and the typical ignorant bluster seen here. Of note:

I don’t know the facts of the case, but the logic of the Democratic position baffles me.

Last year, White House economists claimed that the $862 billion stimulus would create 3.3 million jobs. Since then, the nation has lost more than 3 million jobs.

That’s a 6.3 million jobs gap. By the White House’s own standards, the stimulus failed.

So President Obama has shifted his argument. Sure, the economy lost jobs, he concedes — but without the stimulus, it would’ve lost nearly 2 million more jobs.

Read a solid rebuttal here. Also, from my memory, the language the administration used, and make no doubt, it’s ass cover language, was “created or saved.”

Seems like things aren’t going quite the way Mr. Riedl wants, so he makes his baseless attacks, founded on lies. Par!

Here’s a graph that’s been making the rounds, and I haven’t seen it correctly sourced. I found it on the Speaker of the House blog in this post:

Source for these numbers? Department of Labor’s January Jobs report.

Here are some facts for you:

“But where is the money going, Jon?” you ask. We can see, right here and by state here.

GOP, time to shut up and govern.

GOP Lies: “We will scare you now”

Is the Wicked Witch Dead?