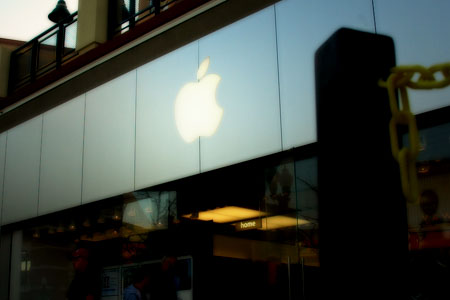 While we were away this weekend, the Apple Store opened in Salt Lake City. Since Heather and I used to live two blocks from the flagship store in Los Angeles, we have experienced the crack before.

Yesterday afternoon, we ventured down to check it out. Still very crowded. Lots of iPods and accessories. Plenty of surfing stations. Nice. There are one or two good Mac stores here, but the way Apple displays the goods is second to none.

I hadn’t seen a video iPod, and it is very sweet. I was surprised at how sharp the video was and how wide it is. The screen seems much larger than the 3rd and 4th generation iPods, even though it’s only a bit larger. If I were doing a commute on Caltrain and/or a subway, this would be a serious coveted item for me. I remember seeing the first iPod in Glendale at the Apple store and thinking that it was a little ahead of its time, but would be huge. I think video is the same way. Once there are more sources and it’s easy for me to get those sources this could be bigger than the original iPod has been for music. For example, if we could travel with one of these, Leta would be a different kid being able to watch an episode or two of Sesame Street, Teletubbies and Boohbah.

The other thing I loved about the store was all the iPod accessories they carried. It was great to hear so many different external speaker sets.

I’m very worried about what this is going to do to our bank acount.

The nerdiest, raddest thing ever

Back to Mostly Normal

For the Mac Junkies