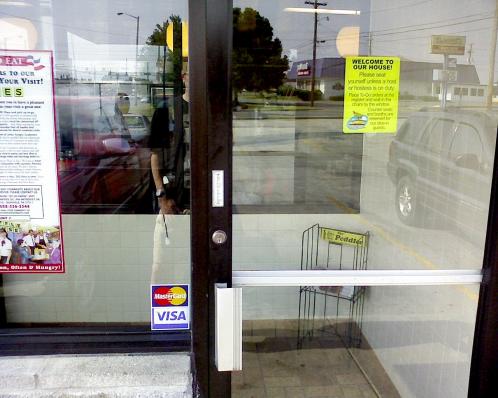 Sunday. We survived! We started by not having breakfast at the Waffle House, which we had done the previous two days. Incidentally, the Waffle House we visited accepted both Visa and Mastercard.

We ate at a local place and it did not disappoint. JB, McQueen and myself all hail from a small town. I’d like to think that we are simultaneously comfortable and uncomfortable when we visit small towns. The restaurants don’t have the budget for crazy interiors or furniture. They have to create something on a shoestring and to survive, have to win over the locals with good food and good vibes. Our breakfast joint was one such place. We had joked about eating there as we had similar places in our home town. But in the south, there is some good cookin’. Out in Utah, the pioneer bitterness is just starting to wear off. For breakfast I had a strawberry stuffed French toast sandwich that dusted anything on the Waffle House menu.

We headed in for a slow start. Today would be about seeing one band: Wilco. Everything else was gravy. 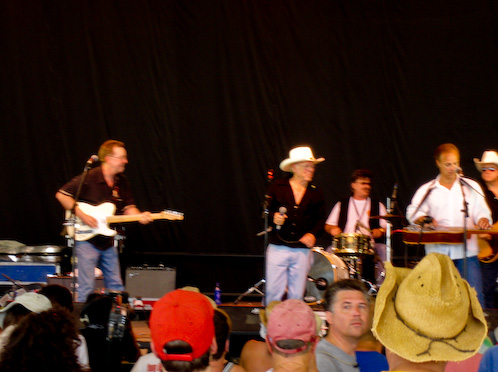 Charlie Louvin–JB really wanted to catch his set and I’m glad he pushed us. One half of the old-timey Louvin Brothers (you might have seen their Satan is Real album cover in a “Worst Album Covers” or a “Best Album Covers” post on somebody else’s blog) took the stage like your grandpa might at a family reunion. He had a tight backing band. I’d challenge anybody his age to be moving in the heat of the day, much less sing a set of songs, some from as far back as 79 years ago. He pulled out some gems and sang sweetly. Great way to start a hot day. After the set, McQueen remarked that after hearing Louvin, we had gotten right with the Lord.

Wolfmother–We caught a few songs, the crowd had grown and so had the dust, so we headed to our favorite haunt to stay shady and cool: the misting tent. Had it not been so damn uncomfortable, we’d have stayed to hear Wolfmother longer, but I think we needed the shade more than we needed to rock out.

Bob Weir & Ratdog–Like yesterday, we didn’t intend to catch most of this set, but given the allure of mist and shade, we parked it for a couple of hours and heard plenty of jam. I’m not a fan of jam bands, despite having a two year career exploring the outer realms of B-flat minor in a punk/acid jazz band. Hypocritical and surly.

Wilco–Despite middling reviews for their latest album (don’t listen to the reviews, the album is beautiful), I was very excited to see these guys. I’ve seen Son Volt and always wanted to catch Wilco, but never took the time. They always seemed to be touring after I’d spent a fortune on other things or I wanted to see other bands more. With the addition of Nels Cline to the lineup, I didn’t want to miss them. I had seen the documentary I Am Trying to Break Your Heart that was made during the Yankee Hotel Foxtrot era. It was that album that brought me back to Wilco after a three-year hiatus and the documentary only made me want to see them live more.

They did not disappoint. Stellar performance and low key enough to not add to the exhaustion. Tweedy acknowledged the heat numerous times, and made a crack about needing to go to “front man school” because he wasn’t used to large crowds.

They played my favorite song on the new album, “impossible Germany”. Nels’ guitar solo is a thing of beauty. Then when the rhythm guitars kicked in and start to double each other as Nels went batshit, I swooned. Beautiful. I’m sure all the O.G. fans thought I was a neophyte with my rapture. Dude. I own A.M., back off. I’ll never be as indie as you, though. 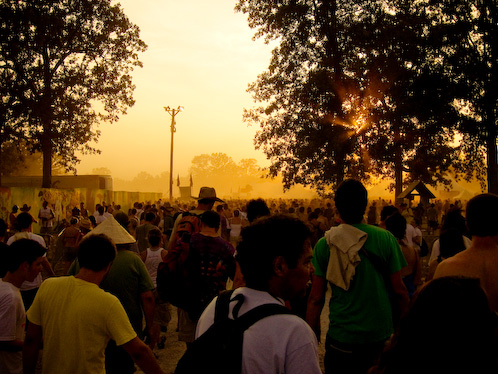 The White Stripes–Nearly similar to the Flaming Lips experience from the night prior, it seemed like everybody was trying to see The White Stripes. I’ve never seen them live and had high hopes. It was just too damn dusty from where we were to get a good view. The sound was great, but the dust proved too much.

We got out and didn’t have any problems driving back to our motel to sit in stunned silence and try to make sense of all that we had seen. 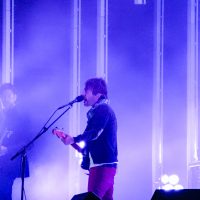