This year I have gained a broader, deeper repect for women. In order to comply with the biological urgings to bring children into the world, they must put up with some crazy shit. Sure, they are built for it, but it’s still crazy the changes they must endure. The hormonal changes alone have made me want to mop floors and give more foot rubs. If I could breastfeed, I would.

There isn’t anybody else that I could begin to imagine as the mother of my children. And I don’t want to try. And come on, the genes she has given our frog!

Falling Over and Possibly Down 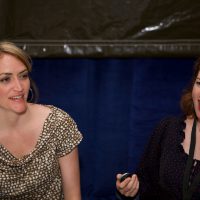