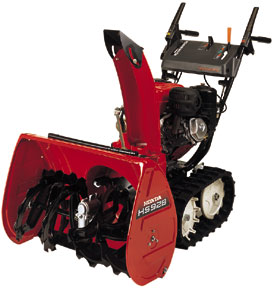 Getting the Right Tool for the Job

We’ve had a record-breaking winter this year. I’ve spent a lot of time digging out from major storms and cursing the hill we live on. I knew going in that our driveway would be a challenge, but I figured our existing snowblower was up to the challenge. I was mistaken.

At our old house, we had a retro driveway with a grass median and two concrete strips. To deal with that driveway, I purchased a 20″ wide, 5 horsepower machine because the larger machines were too wide for the driveway; the runners and scrapers would be damaged the first trip down one of the strips. The little machine did a great job and we never really had a major winter except the first one we were in that house. After that first winter, I bought the snowblower and we jinxed the snow gods.

This year we’ve been dumped on and the little 5HP (seen in action here) just doesn’t cut the driveway needs. Because we have a steep driveway, I have to move all the snow in the street out of the way in order to get in the driveway with any kind of vehicle. The snow at the bottom of the driveway is often slushy and wet thanks to the snowplows. The 5HP machine was an exercise in frustration. It would take anywhere from an hour and a half to two hours (longer in one storm) to clean the walks and driveway. We don’t have that much sidewalk and the driveway is not that big.

Awhile back, I linked to a badass Honda that I was jokingly thinking I needed. It was their top of the line, 11 horsepower machine and it was 32 inches wide. While that might be a great machine, it’s too damn big to store on the property. When we got back from San Diego, I called around on a lark and when I got somebody on the phone, they all assured me that I wouldn’t find anything this time of year and they had been out of stock for some time. Most machines are ordered the previous year and whatever a dealer gets for that season is all they can get. I knew this, but wanted to try just the same. A storm was on its way and shops had been flooded with customers. I left a couple of voicemail messages at other shops (who were too busy helping customers to answer the phone) the day after we got back from our doomed trip, figuring no one would return my call. The next morning, I got a call from a shop. They had three Honda track drive 928s. Three. I said, “I’ll be down shortly.”

I got to the shop and there was a guy eyeing the machines pretty heavily. The sales guy fired up one of them right there in the shop and started showing off what Honda calls a “Hydrostatic” transmission. Basically, you can engage the drive and then move a free-flowing lever back and forth randomly to get just the right forward or reverse speed. This feature is exactly what I need for the driveway. My jaw began to go slack and I started to drool.

It was a little much for me. I asked if they had any deals going, knowing full well that I was damn lucky to find any kind of machine, much less the exact model I wanted and that any kind of deal would be a pipe dream. Sales guy says, “Honda has a 12 month same as cash promotion. No fees, no early payment penalties.”

No sooner had the words “same as cash” left his mouth than I had the phone out and Heather on speed dial to tell her that her two hour waits for me to finish the walks were OVER. She resignedly gave the approval and I filled out the paperwork. Several hours later, the machine was delivered. After it was lowered off the truck, the delivery guy fired it up and showed me a quick demo on some melting ice in the driveway. I tipped him and took the machine around back for some private time as the adrenaline rose. This is a prosumer machine that is flat out awesome. I hit a patch of sidewalk that I hadn’t touched with the other machine and snow was thrown and blown like nothing I’ve experienced.

It has snowed three or four times (and is snowing as I write this), including a couple of storms that dropped 8 or more inches. Machine didn’t even flinch. I’ve had to slow it down to control it, but not because it wasn’t moving snow so fast and far that I feel my middle finger rising to Mother Nature every time I run it.

This tool has changed my life. Was it expensive? Yes. Was it worth it? Without question. Are we broke? Just about.

« Coco by the Numbers
The Dame »